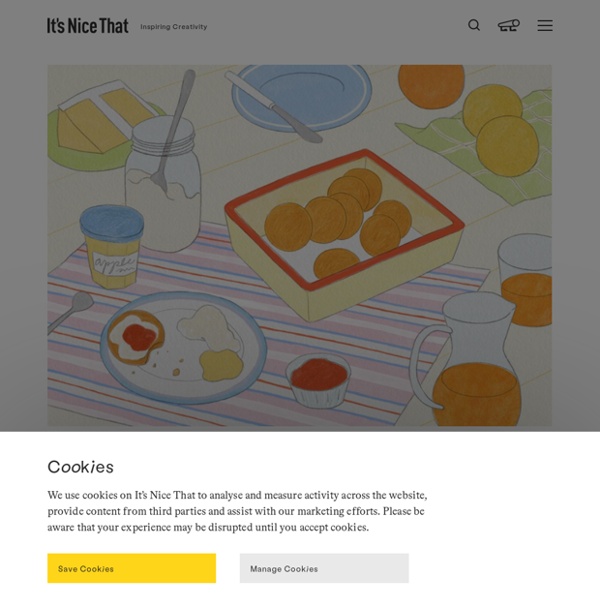 7.3 Billion People, One Building After a year and a half of writing Wait But Why posts, I’ve noticed a theme: humans seem to come up a lot. Sometimes we talk about where humans came from or where we might be going or how we’re all related; other times we look at how we interact and communicate and form relationships. We’ve talked about rich humans and famous humans and baby humans and dead humans and humans from all over the world. We’ve explored what it means to be a human, what it means to be a good human, and whether we’re all alone in the universe. And we’ve spent a lot of time trying to figure out what really matters most in this one, short human life. But somehow, we made it through all of that discussion without ever asking the most important question of all about humans—

Madeleine + Jeremy Grummet + Family - The Design Files Madeleine is an ex-journalist, stylist, crafter and proprietor of Do Re Me – a versatile creative business which has seen her run craft workshops and host craft-based activations for a range of clients including South Melbourne Market, Chadstone Shopping Centre and more. Madeleine’s husband Jeremy is a surgeon. A home with enough space for their four growing girls was not easy to find, so when they came across this generously proportioned 5 bedroom modernist home in Caulfield 3 years ago, their decision was made. The family moved in in July 2011. ‘When we bought this house it was a serious beige and apricot explosion on EVERY single surface’ says Madeleine. She and Jeremy knew the home needed updating a little before moving in, but were keen to avoid taking on major renovations.

Designer Creates Clever Brand Logos By Combining Two Different Objects Into One Kochi-based designer Shibu PG has come up with an interesting project in which he combines icons of two different objects into one unique logo based on the brand name. The logo in each case is a visual representation of the brand name. For example, the logo for Bird Vision is an aesthetically designed symbol of a bird and an eye.

Google AutoDraw Turns Your Rough Scribbles Into Beautiful Icons For Free Google’s latest A.I. experiment is a web-based drawing tool called AutoDraw that converts your rough scribbles and doodles into beautiful, symmetrical icons/clipart that you can download for free. It works on your phone, computer or tablet and uses artificial intelligence to guess and suggest a more polished icon or symbol to replace your drawing. The program uses the same technology found in Quick, Draw! – an online game developed by Google that uses neural network artificial intelligence to guess what a user has drawn (it’s like playing Pictionary against a computer). The AI learns from each drawing, increasing its ability to guess correctly in the future.

15 Clever Examples of Interactive Print Ads You would think print advertising is void of innovation today, but that's actually not the case. In fact, many brands are finding new ways to merge the digital and physical world through magazine and newspaper ads. Download Now: Free Ad Campaign Planning Kit What Is Print Advertising? The 40 best free web fonts It's time-consuming to cut through the ocean of free fonts online, especially web fonts, to find the real gems that punch above their price tag. With this in mind, we've rounded up the greatest free web fonts from around the internet to get you started. There are various methods to source and license web fonts, including subscription-based models such as Typekit and Fontspring, which boast libraries of quality typefaces that are becoming increasingly popular with professional designers.

Craig & Karl illustrate animal-packed Sticker Art books for NHM Combining a few of our favourite things – walruses, stickers, and dynamic illustrations styles – a series of new books illustrated by transatlantic duo Craig & Karl ticks a lot of boxes. The Sticker Art paperbacks series is published in collaboration with the Natural History Museum, and comprises Ocean, Jungle, Woodland and Savannah. Ostensibly aimed at younger children (we’d wager their appeal to be far wider), the books feature eight different animals each, and encourage readers to create their own sticker-by-number animal portraits using Craig & Karl’s illustrations as a guideline. The bold, blocky style typical of Craig & Karl’s work is perfectly suited to the task, and will surely delight yummy mummies and cool dads as well as their creative offspring. As well as the portraits and stickers, each animal in the book is accompanied with some fun and informative facts.

New website Logobook archives logos going back to the 50s Created by a group of Swiss designers, who are now located around the world, Logobook aims to serve as both a resource and an inspiration to design fans. Currently in beta phase, its creators are adding to it all the time. “At the moment Logobook.com is mostly a reference tool for designers and businesses to not only find inspiration but also to build awareness of what has been done before, and by whom,” says Seymour Auf Der Maur, the site’s editor. “In future, we would like to grow the database of original designs, and ultimately to build a strong community of contributing businesses and designers that will help push identity design into new areas, encouraging more innovation and less repetition.”

Avant-garde and modernist magazines - Monoskop Inside back cover of Blok 6-7, Warsaw, 1924. Back cover of MA 8:1, Vienna, 1922. Back cover of Noi II/1:6-9, Rome, 1924. Introduction[edit] Rebuilding a Legacy: The Gastrotypographical- assemblage Article by Richard Anwyl March 05, 2008 The original wall circa 1966 (top) and details of the gastro-typography (above). Each day our world changes, the old quickly vanishing, displaced by inspired new designs, new perspectives and brilliant imaginative creations. Society seemingly demands it, our fascination and appetite for embracing the new apparently endless.

The Electrotyping Process Ellenor Alcorn: The Bryant Vase was completed in 1876 by a team of skilled artists working for Tiffany and Company. They worked for more than a year, meticulously chasing the sterling silver. Tiffany made a second vase for presentation using the electrotyping process. To make an electrotype, molds are taken of each section of the vase. A flexible molding material is applied to the surface —in this case, gutta-percha, the sap of an East-Indian tree. April 2007 - Vol 01 No 04 - Facsimile Magazine Two years ago Sister Mary Corita left Los Angeles' Immaculate Heart Convent, where she had been a nun for thirty years, to become Miss Corita Kent, artist. Cortia's art certainly is not in the kind of style you'd ever envision a nun's, even a former one. But Corita is an unusual person. Her medium is the serigraph, or silk screen print, which bombards the eye with Dayglo colors, pithy quotations from numerous sources (Camus, Peanuts, Beatle John Lennon, Rabbi Abraham Heschel, to name a few), and a generous sprinkling of ad slogans.