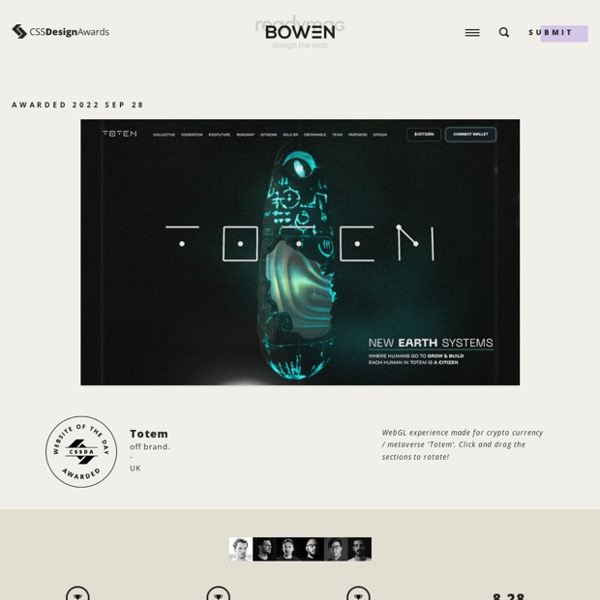 Playful Interaction for Draggable Elements A little playful interaction idea where we add some bounciness to a draggable element and animate it depending on its position. View demo Download source Today we’d like to share two tiny fun interaction experiments with you. NSA files decoded: Edward Snowden's surveillance revelations explained Two factors opened the way for the rapid expansion of surveillance over the past decade: the fear of terrorism created by the 9/11 attacks and the digital revolution that led to an explosion in cell phone and internet use. But along with these technologies came an extension in the NSA’s reach few in the early 1990s could have imagined. Details that in the past might have remained private were suddenly there for the taking. Chris Soghoian Principal technologist, ACLU

50 Useful CSS Snippets Every Designer Should Have With so many new trends advancing every year it can be difficult keeping up with the industry. Website designers and frontend developers have been deeply ingrained into the newer CSS3 properties, determining the ultimate browser support and quirky hacks. But there are also brilliant CSS2 code snippets which have been unrequited in comparison. For this article I want to present 50 handy CSS2/CSS3 code snippets for any web professional. These are perfect for storing in your development IDE of choice, or even keeping them saved in a small CSS file. 8 WordPress Plugins for Building a Video Game Site Posted on 26 March, 2009 By Kim Woodbridge For video game week, I listed some themes suitable for gaming sites and places to find free and cheap games. If you want to use WordPress to build a videogame site, there are a number of plugins that can assist you.

32 Amazing Mini vCard Websites with Slick Javascript Animation Startup Framework Close 2009, Aug 12 // Kevin Liew // 25 comments // Inspirations 32 Amazing Mini vCard Websites with Slick Javascript Animation Advertisement Introduction This is something new, I believe some of us may not even realized there are getting more and more people design vcard website. The Gooey Effect The following is a post by Lucas Bebber. Lucas the originator of some of the most creative effects I've ever seen on the web. So much so I couldn't resist blogging about them myself several times. Much better this time: we got the man himself to explain how SVG filters work and how you can use them to create a very cool gooey effect. A while ago, Chris wrote about Shape Blobbing in CSS. The effect is cool and the technique behind it is clever, but the approach, through regular CSS filters, has several drawbacks: no transparency, no content inside the blobs, hard to make it in any color besides black and white, etc.

Home Appliance Energy Use In the United States, over 20% of our total energy consumption is residential. In fact, in the United States, we are the 7th largest per capita consumer of residential energy. Where is all of that energy going? Are you living with a "gas-guzzler"? Explore the application below to understand more about how we consume energy in our homes. Caption Hover Effects A tutorial on how to create some subtle and modern caption hover effects. View demo Download source Today we want to show you how to create some simple, yet stylish hover effects for image captions. The idea is to have a grid of figures and apply a hover effect to the items which will reveal a caption with the title, author and a link button.

Royalty Free Stock Photo Texture Gallery » tonytextures.com Royalty Free Stock Photo Texture Gallery You NEVER can have enough textures! Therefore we open our photo case here for you: over 4000 free textures! 50 Beautiful Clean and Simple Web Designs When it comes to web design, my experience demonstrates to me that it’s easier to add to a design rather than to take away from it. The challenge with minimalist layouts lies in the conundrum of making something beautiful with basic design elements —and with as few of them as possible. Lately, I’ve been attracted to simple and clean designs.

Draggable Dual-View Slideshow Lorem Waldy Distilling design and other interesting methods It was not child's play tackling those horses. Some of the kind-hearted station folk in the backblocks had sent down some wild warrigals of the West; bucking brumbies that beat the band; old outlaws off the grass that the station hands could never master. State Worker Salary Database: Database Updated January 22, 2015: Now includes 2014 CSU pay, 2014 civil service pay, 2013 University of California pay, and 2012 state legislative pay. This database allows you to search the salaries of California's 300,000-plus state workers and view up to eight years of their pay history. Search by name or department. The Best Freebies for Designers (June 2013) Here are the best freebies for designers from June 2013. We have free GUI templates, icon sets, fonts, Photoshop brushes, PSD templates, textures… and everything else inbetween. Freebies for Designers – June 2013: Icon Sets Thin Stroke Icons (PSD) Download Page →

Level Design A plethora of level-design related texts and pieces from my brain. Mapography I’ve made a bunch of maps in my time.