Search For People At PeekYou 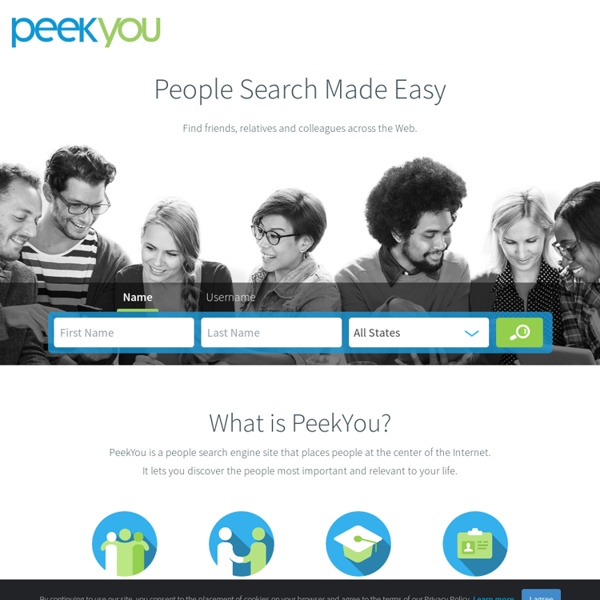 The Beat - Instagram Photos and What's Around Them - by the Rutgers Social Media Information Lab About the Beat We use Instagram pictures users added to their map, and combine them with the corresponding Google StreetView location to help explore topics in a new way. Feel free to explore your own beat by putting a new topic in the search box.

Domestic Violence: Can your smartphone save your life? Erasing domestic violence with a swipe of the finger? There’s an app for that. From apps to combat cyberstalking and real life domestic abuse, to using existing popular Facebook features, hundreds of volunteer developers contributed their time and talent to create online solutions against domestic violence during a weekend hackathon spanning two continents. The leading cause of injury for women - more than car accidents, muggings and rapes combined - domestic violence claims more female victims than any of the main threats to women’s wellbeing in the world. One in three women will be a victim of violence during her lifetime, with many being abused by a family member, according to experts. Latin America -and Central America in particular - are no strangers to this issue.

Wind Map An invisible, ancient source of energy surrounds us—energy that powered the first explorations of the world, and that may be a key to the future. This map shows you the delicate tracery of wind flowing over the US. The wind map is a personal art project, not associated with any company. Iran: A Crime on YouTube, an Execution in Public Two young men, Alireza Mafiha and Mohammad Ali Sarvari, were executed by hanging in Tehran, Iran in the early hours of January 20, 2013 before the eyes of public spectators [warning: graphic photos] who had gathered to watch, according to the Islamic Republic News Agency (IRNA). Crime and YouTube The hunt for the alleged muggers was given top priority after security camera footage was posted on YouTube towards the end of 2012 showing four youths on two motorbikes who ambushed a pedestrian, threatening him with a knife and taking his belongings. Four men were soon arrested and tried. Mafiha and Sarvari were sentenced to death, and the other two were each sentenced to 10 years in prison, five years in exile, and 74 lashes. Over a fistful of dollars

H. G. Wells Herbert George "H. G." Wells (21 September 1866 – 13 August 1946)[3] was an English writer, now best known for his work in the science fiction genre. He was also a prolific writer in many other genres, including contemporary novels, history, politics and social commentary, even writing textbooks and rules for war games. Wells is sometimes called "The Father of Science Fiction", as are Jules Verne and Hugo Gernsback.[4][a] His most notable science fiction works include The War of the Worlds, The Time Machine, The Invisible Man and The Island of Doctor Moreau.

Fashion History Movies Music A list of slang words and phrases that were used during the 1940s, and their meanings. This is just icing on the cake when you consider what the decade already gave us in the form of patriotism, music, fashion, and movies. Now, a language! In no particular order: Take a powder – to leave