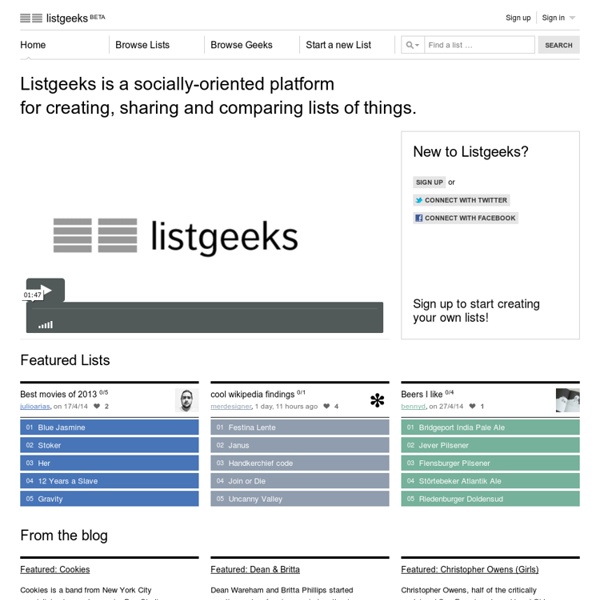 FlexLists Explore Weird & Wonderful Lists At Snagsta What results is that you find all sorts of wonderful and weird lists including tourism advice, motivation tips, startup advice, book lists, movie lists and much more. There’s always new lists to check out, so it’s definitely somewhere you could head back to on a regular basis just to get a little more inspiration. Signing up at Snagsta only takes a moment, regardless of whether you create a log in or use Facebook Connect to log in. Exploring Lists Browsing the lists can be done by categories listed at the bottom of all Snagsta pages, including some “best of” categories to let you quickly browse the popular lists. When browsing lists, ensure you let Snagsta know if you like it. Make Your Own Lists Creating a list is straightforward – the “Create List” link is at the top of all Snagsta pages. Take a look around for list ideas “” there’s plenty of unusual ideas out there. Finding Friends What Could Snagsta Do Better? It would be great to see : Have a play!

Amazon 'wish list' is gateway to epic social engineering hack Comedian Erik Stolhanske didn't know what he was getting himself into when he let a cybersecurity expert at SecureState take a crack at hacking him. The "Super Troopers" actor gave the company the green light to try to access his Twitter account with nothing more than his name. What he found out was that his entire digital life could have been compromised using simple techniques. SecureState profiling consultant Brandan Geise went on a mission to hack into Stolhanske's Twitter account, but instead was also able to gain access to his Amazon, AOL, Apple and Dropbox accounts, as well his Web hosting account. A manipulation tactic called social engineering can give anyone smart enough to connect the dots a gateway into your digital domain. "Pretty much anyone can do this," Geise told CBSNews.com. Geise started by running a search of Stolhanske's name on Spokeo.com, a website that aggregates public information about people. "It definitely required a lot of recon work," Geise said. He was in.

List Of The Day Can Amazon Monetize Anything? Billy Pilgrim has come unstuck in copyright. The time-traveling character from Kurt Vonnegut’s 1969 novel Slaughterhouse-Five this month became available to would-be writers of Vonnegut fan fiction, through a new Amazon.com program called Kindle Worlds. Earlier this month, Amazon announced it had cut a deal with the Vonnegut Trust to legitimate Vonnegut fan fic published through the program. For Amazon, which has already scrambled publishing as we know it, this could be seen as a coup upon a coup. But with the participation of the Vonnegut Trust, Amazon enters new--and controversial--territory. FAST COMPANY: Can you give an overview of Kindle Worlds? PHILIP PATRICK: Kindle Worlds is the first commercial publishing platform that enables any writer to create stories inspired by popular books, shows, films, comics, music, and games--what we call Worlds--and sell them in the Kindle Store. How many authors or franchises are on the platform? What does the rise of fan fiction mean?

5ives | Merlin's Lists of Five Things America's Multimedia Online (Human Eye Frames Per Second) This article is dedicated to a friend of mine, Mike. There is a common misconception in human thinking that our eyes can only interpret 30 Frames Per Second. This misconception dates back to the first human films where in fact a horse was filmed proving actually that at certain points they were resting on a single leg during running. These early films evolved to run at 24 Frames Per Second, which has been the standard for close to a century. A Movie theatre film running at 24 FPS (Frames Per Second) has an explanation. A Movie theatre uses a projector and is projected on a large screen, thus each frame is shown on the screen all at once. Now since the first CRT TV was released, televisions have been running at 30 Frames Per Second. Moving on now with the frame rate. Computer Games and their industry driving use of Frames Per Second It's easy to understand the TV and Movies and the technology behind them. A frame or scene on a computer is first setup by your video card in a frame buffer.