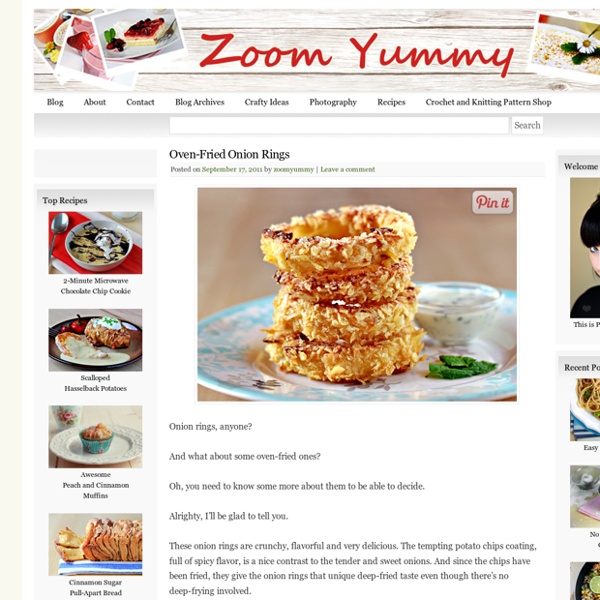 Onion rings, anyone? And what about some oven-fried ones? Oh, you need to know some more about them to be able to decide. Alrighty, I’ll be glad to tell you. These onion rings are crunchy, flavorful and very delicious. The tempting potato chips coating, full of spicy flavor, is a nice contrast to the tender and sweet onions. So, what do you think now? Are you with me? If so, here’s the stairway to heaven…no, no… I meant – here’s the step-by-step recipe… This is what we need. 1. 2. 3. Whisk until a smooth batter is formed. 4. 5. Just like this. 6. 7. 8. Let the excess batter dribble off a little. 9. 10. Since you will probably have more rings than you can fit in one baking sheet you might need to work in batches. 11. 12. I’ve used a lovely yogurt herb one. Crunchy around, soft and sweet in the middle. Enjoy, dear friends. Love, Petra (This recipe was adapted from notwithoutsalt.com.) Related:  Onions

Quickest French Onion Soup Recipe Quick French Onion Soup Recipe This is the quickest french onion soup. It’s ready in under 15 minutes but is as decadent and delicious as the original. Back when I was a kid I loved French Onion Soup. But if you’d told me that it was made mostly out of onions, I wouldn’t have believed you. Nowadays I understand how it’s possible that the kid-despised vegetable can lead to such beautiful flavors. Pin this quick and DELICIOUS recipe! This French Onion Soup is ready in under 15 minutes, like all of my SOUPin15 recipes. As with all of the SOUPin15 recipes, this one comes with a SouperTip for making soups delicious in a short amount of time. You won’t be able to taste the wine in the soup. And now, here’s my Quick French Onion Soup recipe: Ingredients: 4 Tbsp. unsalted butter3 large sweet onions, divided1 and 1/2 tsp. brown sugar, dividedsaltcoarse black pepper6 cups low or no-sodium beef broth3 sprigs fresh thymebaguette or other white bread5 oz. Directions: Who loves cheese??? Leave a Comment

Our 10 best onion recipes | Life and style Sausage-stuffed onions Stuffed veg is always a winner, the savoury filling seeping into its slow‑cooked casing to create melting parcels of myriad flavours. Sausage and onion are a particularly combo in terms of texture and taste. Serves 44 medium red onions (about 225g each), peeled, stem-ends trimmed, root-ends trimmed but intact3 tbsp extra virgin olive oilFlaky sea salt300ml water1 head garlic, outer layers removed to expose the clovesA small handful of thyme sprigs, plus 1 tsp leaves125g sausage meat225ml double cream 1 Preheat the oven to 200C/400F/gas mark 6. 2 Carefully lift the onions on to a cutting board, leaving the liquid in the pot. 3 Squeeze the soft flesh of the garlic cloves into the casserole, and add the thyme leaves, cream, the remaining 225ml water and 1 tsp salt. 4 Return the casserole to the oven for about 40 minutes, uncovered until the sauce is thick, but not gloopy. April Bloomfield, A Girl and Her Pig (Canongate) Chicken salad with onion pickle Onion fritters

How to Caramelize Onions, Caramelized Onions Recipe (with video) 1 Cut the onions root to tip: Slice 1/2-inch off the stem ends of the onions and the roots off of the root end. Place the onions cut side down on the cutting board. Cut them in half through the root end. Peel back the peels from the onions. Lay the onions cut side down and make angled cuts into each onion, aimed at the center, cutting almost all the way, but not completely through the root end. Make the cuts to your desired level of thickness. The root end will help hold the onion together as you cut it, making it easier to cut. 2 Heat olive oil and butter, add onion slices: Use a wide, thick-bottomed sauté pan for maximum pan contact with the onions. Depending on how strong your stovetop burner is you may need to reduce the heat to medium or medium low to prevent the onions from burning or drying out. After 10 minutes, sprinkle some salt over the onions, and if you want, you can add some sugar to help with the caramelization process.

Onion and cider soup with cheese toast recipe | The Sunday Times Magazine ● Merlin Labron-Johnson is a chef who never rests on his laurels. After six years working in kitchens across Europe, he was appointed head chef at the Portland restaurant in London, at the age of just 24. Nine months later — before he turned 25 — he became the youngest British chef to be awarded a Michelin star. He now is chef-patron of the farm-to-table restaurant Osip in Bruton, Somerset, which this week was awarded a Michelin star. This recipe is based on a classic soupe a l’oignon but with a Somerset twist. Continue reading Get unlimited access on any device.