TheMAG: your daily dose of creativity 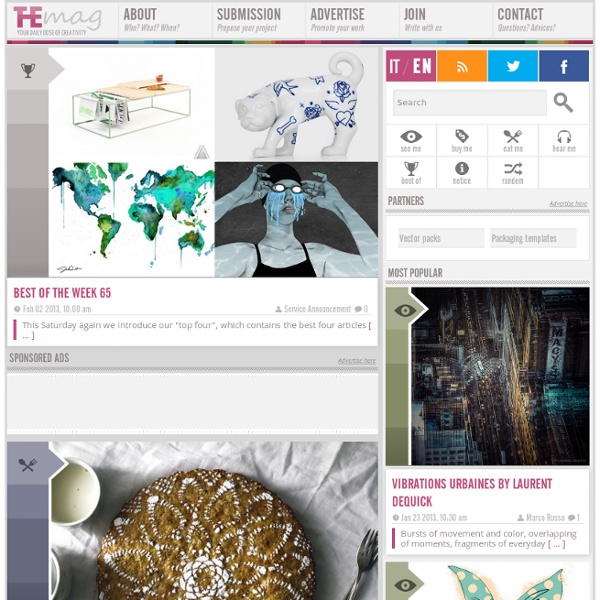 Bat Bow Tie Sometimes you just need to get a little festive! Halloween is the perfect time to do just that. Here is a simple tutorial for creating your own bat bow tie. These are so cute, and make the perfect October accessory. Supplies: -Black Felt -Flat back safety pin -Hand Needle -Scissors -Straight Pins -Template -Thread 1. I think this came out really cute.

Design Inspiration and Web Resources | PixelPetal Astounding Stories of Super-Science, February, 1930, by Various. The Project Gutenberg EBook of Astounding Stories of Super-Science February 1930, by Various This eBook is for the use of anyone anywhere at no cost and with almost no restrictions whatsoever. You may copy it, give it away or re-use it under the terms of the Project Gutenberg License included with this eBook or online at www.gutenberg.net Title: Astounding Stories of Super-Science February 1930 Author: Various Release Date: April 26, 2009 [EBook #28617] Language: English Character set encoding: ISO-8859-1 *** START OF THIS PROJECT GUTENBERG EBOOK ASTOUNDING STORIES--SUPER SCIENCE *** Produced by Greg Weeks, Katherine Ward and the Online Distributed Proofreading Team at Transcriber's Note Initial advertisements moved below main text . The Beetle Horde concludes a story begun in the Jan, 1930 edition. On Sale the First Thursday of Each Month The Clayton Standard on a Magazine Guarantees: Issued monthly by Publishers' Fiscal Corporation, 80 Lafayette St., New York, N.Y.

Industrial Design Mirror Fences Reflect The Ever-Changing Landscapes These unusual picket fences are made solely from mirrors by American artist Alyson Shotz. They’ve been installed in various locations since 2003, reflecting the surroundings and becoming, depending on the location, either subtle camouflage or mind-bending and twisted landscapes. Innovative Candle Holder Makes Candle Last At Least Twice As Long British artist and designer Benjamin Shine proved that real genius lies in simplicity. 21 Creative Furniture Design Ideas For Pets We spend a lot of time decorating and renovating our homes, but we often forget to customize them for the specific needs of our pets. Astronomical Watch Accurately Shows The Solar System’s Movements On Your Wrist Midnight Planétarium is a luxuriuos masterpiece of science and design – a watch that shows 6 planets from the Solar system rotating around the Sun in their actual pace. Graffiti Furniture by Dudeman 14 Clever Ideas by Gogelmogel 10 Of the Strangest Homes In the World

PEARL + EARL 123 Inspiration 5 mind-bending facts about dreams When your head hits the pillow, for many it's lights out for the conscious part of you. But the cells firing in your brain are very much awake, sparking enough energy to produce the sometimes vivid and sometimes downright haunted dreams that take place during the rapid-eye-movement stage of your sleep. Why do some people have nightmares while others really spend their nights in bliss? Like sleep, dreams are mysterious phenomena. Here's some of what we know about what goes on in dreamland. 1. As if nightmares weren't bad enough, a rare sleep disorder — called REM sleep behavior disorder — causes people to act out their dreams, sometimes with violent thrashes, kicks and screams. 2. Staying up late has its perks, but whimsical dreaming is not one of them. In the study 264 university students rated how often they experienced nightmares on a scale from 0 to 4, never to always, respectively. 3. As in their wake hours, men also dream about sex more than women do. 4. 5.

Matomeno Sorry, I'm a Lady Vitsœ | Home Kelvin Doe, AKA DJ Focus, Is Pretty Much A Teenage Tony Stark Back when Iron Man came out, one of the memes surrounding it was Jeff Bridges’ line about making things IN A CAVE, WITH A BOX OF SCRAPS. Yeah, that pretty much sums up the genius that is African teen prodigy Kelvin Doe. Here’s what Kelvin has done before most of us get a driver’s license: Built a battery to power his family’s home out of scrap metal, baking soda, and acid.Hand-built an RF transmitter, which he uses to broadcast the news to his village in Sierra Leone and the surrounding area.And did all of this with broken crap he pulled from the garbage. Oh, we forgot to mention, he has no formal training. The electronics, the chemistry, the physics — it’s all stuff he largely figured out on his own, and the stuff he built he reverse-engineered from stuff people threw in the trash that was largely broken or otherwise useless. In other words, he doesn’t live in a cave, but he does built pretty much everything out of scraps. I want more like this!

Colossal | A blog about art and visual ingenuity.