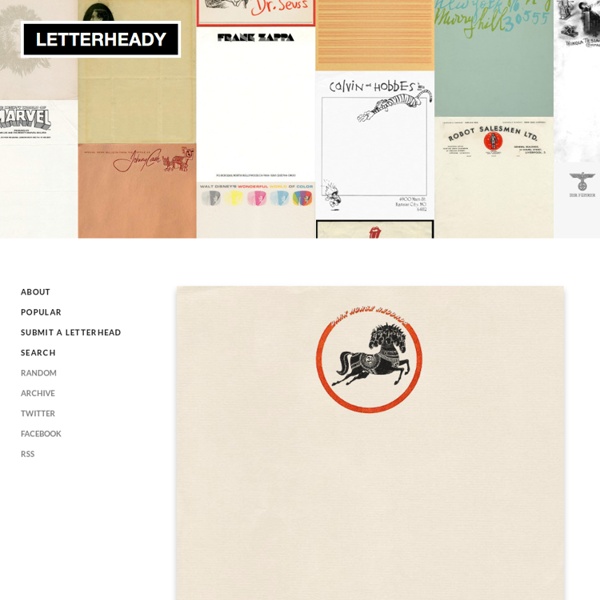 Gary's Social Media Count Click for App Store Page Original Counter and Post from 24 Sep 2009! June 2013 ‘Social’ Update (mobile, games & heritage to come) 60+ Beautiful Photoshop Logo Tutorials And Resources When we talk about a famous brand, the first thing that comes to mind is its logo. The logo is the most essential component of any personal brand and also the hardest part to execute. A logo must be appropriate, aesthetically pleasing and a reflection of the company’s credibility. garfield minus garfield garfield minus garfield Garfield Minus Garfield is a site dedicated to removing Garfield from the Garfield comic strips in order to reveal the existential angst of a certain young Mr. Jon Arbuckle. It is a journey deep into the mind of an isolated young everyman as he fights a losing battle against loneliness and depression in a quiet American suburb.

40+ Beautiful Robot Characters Illustration There are lots of cool illustrations that can be found on the net which can be a good basis to get some inspirations. Just like the 50+ Cute and Adorable Monster Characters Illustration that I showcase a days ago, here is another list of some cool illustrations to enhance your ideas. This time it is a 40+ Beautiful Robot Characters Illustration. The 38 Most Unexplainable Images On The Web If you're causally browsing the web looking at photos via Google Image Search, remember to have the 'Safe Search' filter enabled - if you don't you're bound to be in for a few surprises. That's exactly what happened to us recently (we haven't been able to sleep for weeks as a result) and low & behold Google very generously displayed some of the most shocking, unexplainable, bizarre and downright scary images the internet has ever seen. From the ill-advised to the utterly random, we've picked out 38 of the most unexplainable images on the web. Now some will make you laugh, some will give you nightmares, many defy logic or reason and all of them will have you asking the same question repeatedly...WTF PEOPLE!?! Enjoy and do tell us which number your personal favourite in the comments below....

Opinions on Corporate and Brand Identity Work UnderConsideration is a graphic design firm generating its own projects, initiatives, and content while taking on limited client work. Run by Bryony Gomez-Palacio and Armin Vit in Austin, TX. More… products we sell Flaunt: Designing effective, compelling and memorable portfolios of creative work. Postcards From Above 22nd May 2013 | 9 notes 29th Oct 2012 | 32 notes 22nd Oct 2012 | 66 notes 13th Oct 2012 | 29 notes 3rd Oct 2012 | 23 notes 2nd Oct 2012 | 13 notes Marketing News & Expert Advice The importance of headlines should never be overlooked, a little time spent finding the right headline can make a lot of difference. A good headline means more people will click on your article wherever they see it, it ensures that the effort you spent in writing an article doesn’t go to waste, and it can also help your content to be picked up by search engines in the weeks and months after publishing. Here are a few areas to think about when writing headlines.

Epsilon Description "In 2008, the largest particle accelerator ever created, the LHC at CERN's particle physics lab in Switzerland, was activated for the first time. The research obtained from this experiment has revolutionized the way we think about science. Un-answered questions that have puzzled man since the dawn of humanity are finally being answered. Are there extra dimensions? Pictogram Movie Posters (12 total) Viktor Hertz combines two of his greatest hobbies, graphic design and film, into a clever series starring pictograms! Often seen on signs or instruction manuals, pictograms serve as our universal language, a way for all of us to quickly figure out where we're going or what we're (not) allowed to do. To him, this set became Hertz's “form of expression,” a way to stretch his creativity and imagination. “I've always been fascinated and a bit obsessed by pictograms, with the way they are as simple as possible,” he tells us. “A classmate called me a ‘pictophile' the other day.

Logo Design History - Famous Logos Adidas - a name that stands for competence in all sectors of sport all over the world. Adidas was founded by Adolf (Adi) Dassler, who started producing shoes in the 1920s with the help of his brother Rudolf Dassler who later formed rival shoe company PUMA AG. Adi Dassler's aim was to provide every athlete with the best possible equipment. For this he followed three guiding principles: design the best shoe for the requirements of the sport, protect the athlete from injury, and make the product durable. Today, the Adidas brand product range extends from shoes, apparel and accessories for basketball, soccer, fitness and training to adventure, trail and golf. The company's clothing and shoe logo designs typically feature three parallel stripes, and this same motif is incorporated into Adidas's current official logo.

Cabinet of American Illustration - About this Collection - Prints & Photographs Online Catalog Most images are digitized | Some jpegs/tiffs display outside Library of Congress | View All The Cabinet of American Illustration contains more than four thousand original drawings by American book, magazine, and newspaper illustrators, made primarily between 1880 and 1910. It includes illustrations for magazines, novels, and children's books; cartoons; cover designs; and sketches for posters. More than two hundred artists are represented, including Charles Dana Gibson, Elizabeth Shippen Green, Oliver Herford, and Jessie Wilcox Smith.