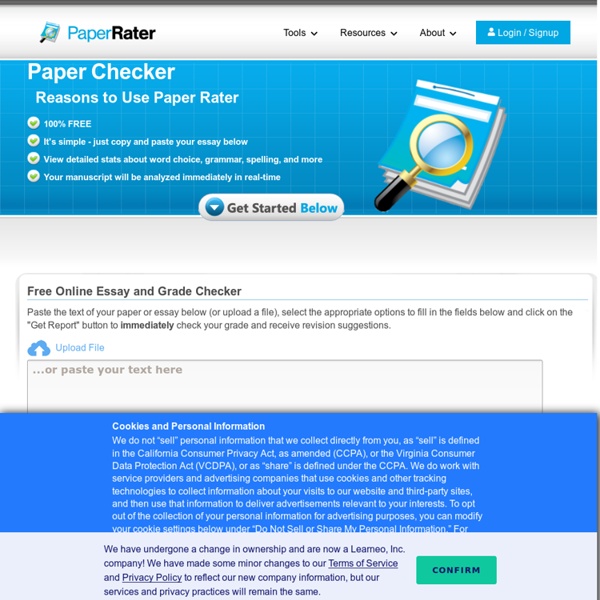 Paste the text of your paper below (or upload a file) and select the "Get Report" button to immediately receive your analysis.* Upload File Select the education level of this paper's author*: Select the type of paper you are submitting (optional): Terms of UseLast updated on February 20, 2014 This document explains the Terms of Use under which you may use PaperRater.com ("PaperRater"), its products and services. Please read these Terms of Use carefully. PaperRater may modify or revise these terms at any time, at its sole discretion, by updating this page. Using PaperRater In addition to complying with all of the terms on this page, you must also comply with all of the terms of PaperRater's Privacy Policy, and all applicable laws and regulations, such as those regarding the export and control of data. As part of your use of PaperRater, you may be required to provide information about yourself, such as identification or contact details. Submitted Content Liability and Indemnity Privacy

ISAR - Rewriting Mental Testing History Rewriting Mental Testing History: The View from the American Psychologist Note: This article, first published in 1986, is a critique of Mark Snyderman and Richard J. Herrnstein, "Intelligence Tests and the Immigration Act of 1924," American Psychologist 38 (September 1983): 986-995, in which the authors argue: "The testing community did not generally view its findings as favoring restrictive immigration policies like those of the 1924 Act, and Congress took virtually no notice of intelligence testing, as far as one can ascertain from the records and publications of the time." (p. 986). Steven A.

OWL Coming Soon: A new look for our same great content! We're working hard this summer on a redesign of the Purdue OWL. Worry not! Our navigation menu and content will remain largely the same. If you are having trouble locating a specific resource, please visit the search page or the Site Map. Psychology & The Human Mind What Science Tells Us about Beating Addiction Aspen Ideas Festival PBS Addiction has been scientifically established as a disease, not an absence of willpower. Neuroscientists are studying how drugs of abuse alter the brain, animal models are guiding us to new knowledge at the molecular level, and genetic tests are helping to distinguish many forms of addiction. Continue Test Your Implicit Bias with Science

Common Transition Words and Phrases in Writing: Free Guide Common Transition Words and Phrases The information presented in any academic paper must be structured and well-organized in order to convey its meaning clearly. To make readers’ attention flow from one idea to another smoothly, and to make the paper readable by connecting its semantic parts and indicating their relationships, transition words and phrases are used. The material you describe can be divided into two parts: facts which you introduce, and the relationships which you construct between them. Transitions prepare readers for understanding upcoming information by alerting them as to how they should react to presented ideas, and how to piece them together into a logically coherent argument. In other words, transitions are meant to make the organization of your paper easier to follow.

Homepage of the Department of Psychology at the University of Leipzig Furthermore, the growth of the Institute of Experimental Psychology will be presented in an overview: In 1917, Felix Krüger (1874-1948) was appointed to be the director of the Institute of Psychology at the suggestion of Wundt and with the consent from Johannes Volkelt and Eduard Spranger. Krueger was appointed on the grounds that was the only candidate who promised to continue the proceedings of experimental and ethnological psychology according to Wundt. The Department of Psychophysics was then outsourced to the so-called Pyschophysisches Seminar (Psychophysical Seminar). The professorship of Wilhelm Wirth (1876-1952) was renamed as that of philosophy with a focus on psychophysics; however, the duration of the seminar was confined until Wirth’s resignation.

Words to Avoid in Academic Writing There are some words that students use in academic writing that could be said to be overused or unnecessary. Whether you are writing a paper for a class, or you are submitting a business proposal as an entrepreneur, there are particular words that you should avoid in order to maintain a professional writing appearance. There is an exception, though, if you are specifically told by the person who assigned your work that the presence of colloquial and casual language is allowed. But this rarely happens, and it is best to avoid the following list of words even in the case of getting permission to use a freer language than usually practiced in academic writing: 1. Very FJ Gall Franz Joseph Gall (1758-1828) the originator of what later became phrenology. Franz Joseph Gall was born in the Swabian village of Tiefenbronn near Pforzheim, which was later in the German Grand-Dutchy of Baden, the sixth of ten children of Roman Catholic merchant parents. Although originally intended for the priesthood, and first educated by his priest uncle, Gall studied medicine in the French city of Strasbourg in 1777. There Gall was introduced to the comparative anatomy of Johann Hermann (1738-1800) who taught that there was a close relationship between Man and apes. In 1781 Gall continued his medical studies in Vienna where he was most impressed by his teacher, the well-known physician Maximilian Stoll (1742-1787). Stoll emphasized the collection of many empirical facts from clinical observation before drawing general conclusions, a theme which would permanently become part of Gall's practice and rhetoric.

Students Learn to Advocate with Reasoned Argument Before students dive into responding to the writing prompt, students will read the article on ThinkCERCA "How did Benjamin Franklin's inventions benefit people for years to come?" As a quick formative assessment, teachers can have students complete the five questions to check for student understanding of the text. After reading the text, explain to students that they will be using this article to generate reasons for a text and supporting them with text.

History of Phrenology on the Web What was phrenology? Phrenology was a science of character divination, faculty psychology, theory of brain and what the 19th-century phrenologists called "the only true science of mind." Phrenology came from the theories of the idiosyncratic Viennese physician Franz Joseph Gall (1758-1828). The basic tenets of Gall's system were: 1.The brain is the organ of the mind. 2. The mind is composed of multiple, distinct, innate faculties. 3. Writing Guides The following Writing Guides are available. To view guides, click on the list of catgories on the list below. You may view or hide descriptions of the guides. Writing and Speaking Research Writing & Documentation

Default History The first verifiable psychometric laboratory in the world was set up as part of Francis Galton’s Anthropometric Laboratory in South Kensington, London in 1884 (although because Galton was researching and publishing in psychometrics long before then, this date is late, possibly by about seven years or more, depending on one’s definition of ‘laboratory’). Its lineal descendant, the Galton Laboratory was established (as the Eugenics Record Office and Biometric Laboratory) at UCL in 1904, where it has survived as part of the Department of Genetics, Evolution and Environment. Upon relocation of the laboratory to the galleries of the South Kensington Science Museum at the end of the International Health Exhibition in 1885, Galton donated some of his equipment to Cambridge University.

A Must Have Tool to Track Students Writing May , 2017 Draftback is a good web tool that allows you to playback the revision history of any Google Doc you can edit. You will be able to watch your edits roll out in a video player as if you are watching a movie. We have tried this extension a couple of times and it worked perfectly well. Diogenes the Cynic Sunday's program is about Diogenes the Cynic. Diogenes was born about 413 BCE and died in 323 BCE, the same year, and, at least according to legend, the same day as Alexander the Great, who had an unrequited admiration for Diogenes. Cynicism was a School of Philosophy that was founded in Athens by Antisthenes (455—366 BCE), a student of Socrates.

An Excellent Tool to Help Students Learn How to Write Different Types of Letters May 5, 2017 letter Generator is an excellent tool from ReadWriteThink that helps students learn about letter writing. Whether it is a business or friendly letter, students will get to explore the different parts making up a letter and work towards creating their own letters. Letter Generator provides pre-made templates students can use to write their letters. All they need to do is simply filling in their own information. The process to use Letter Generator is simple and easy. The first step is to choose the type of letter you want to write: friendly letter or business letter.