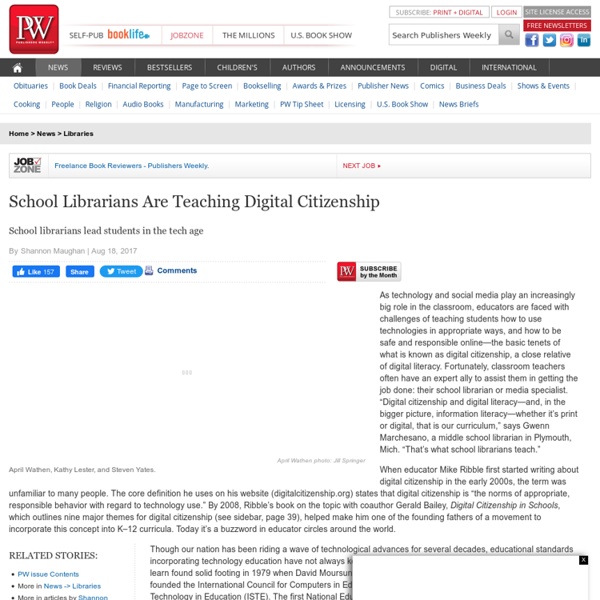 April Wathen photo: Jill Springer April Wathen, Kathy Lester, and Steven Yates. As technology and social media play an increasingly big role in the classroom, educators are faced with challenges of teaching students how to use technologies in appropriate ways, and how to be safe and responsible online—the basic tenets of what is known as digital citizenship, a close relative of digital literacy. Fortunately, classroom teachers often have an expert ally to assist them in getting the job done: their school librarian or media specialist. “Digital citizenship and digital literacy—and, in the bigger picture, information literacy—whether it’s print or digital, that is our curriculum,” says Gwenn Marchesano, a middle school librarian in Plymouth, Mich. “That’s what school librarians teach.” When educator Mike Ribble first started writing about digital citizenship in the early 2000s, the term was unfamiliar to many people. Lester is proactive at the start of the school year. Identifying Fake News

The Information Literacy User’s Guide: An Open, Online Textbook Introduction In 2010, a textbook being used in fourth grade classrooms in Virginia became big news for all the wrong reasons. The book, Our Virginia by Joy Masoff, had caught the attention of a parent who was helping her child do her homework, according to an article in The Washington Post. Carol Sheriff was a historian for the College of William and Mary and as she worked with her daughter, she began to notice some glaring historical errors, not the least of which was a passage which described how thousands of African Americans fought for the South during the Civil War.

Critical readers in the (mis)information age Did you know that Chicago was the most dangerous city in the US in 2014? I didn’t. I would have thought it was some bigger city, but according to this set of FBI statistics of total murders, I was wrong. But actually, was I? It’s very easy to look at this graph at face value without digging much further into the narrative it presents. As readers, we absorb this information, particularly when it comes from a perceived authority, but do we question it appropriately? Cyberbullying Protection: Librarians As Cyber-Arms With the arrival of Kindle, Nook and other technology in today’s world, libraries are sometimes forgotten as a first resource for information and services. But libraries have moved into the virtual realm, too. They can be utilized to provide Internet safety measures as well as cyberbullying protection. Pay a visit

Howard Rheingold: Check Facts With Crap Detection Resources - DML Central Want to know if someone plagiarizes a speech? Is the content on a website copied from another website? Do those song lyrics sound familiar? Teacher's Guide to Digital Citizenship The horror stories of young people not grasping the reach and influence of the content they put online are familiar to all of us. From the loss of job opportunities due to unprofessional pictures or comments on social media, to the more serious threats of abduction, and even the self-harm inspired by cyber bullying, the stakes are high. While students may often seem clueless to these dangers, some are starting to understand the risks. In a recent Rasmussen study on digital literacy, details of which you can see in the infographic below, 37% of millennials aged 18 – 34 said they consider the internet scary, which is more than any other demographic.

As Google Fights Fake News, Voices on the Margins Raise Alarm - The New York Times SAN FRANCISCO — When David North, the editorial chairman of the World Socialist Web Site, noticed a drop in the site’s traffic in April, he initially chalked it up to news fatigue over President Trump or a shift in political consciousness. But when he dug into the numbers, Mr. North said, he found a clearer explanation: Google had stopped redirecting search queries to the site. He discovered that the top search terms that once brought people to the World Socialist Web Site were now coming up empty. “This is not an accident,” Mr.

MediaLit Moments Friday, 19 May 2017 11:06 Beth Thornton In the “olden days,” people primarily relied upon newspapers for their news, and the papers were clearly labeled by section -- “News” “Features” “Opinion.” Through everyday use, newspapers trained their readers to expect the international and national news on the front page, and state and local news in following pages, and to flip through the pages for articles about local heroes or topics of interest like Home and Garden, Sports, or their favorite columnists and Editorials. Today, such labels are abandoned when articles are lifted as links and shared via social media, or when people check YouTube for the latest news, or when people accept their friends’ postings as “news.” When you read your news on Facebook (and many people do!)

Cyberbullying: What Teachers and Schools Can Do They may not call it cyberbullying. Students may say they got "dissed" on Facebook or that someone flooded their phone with mean texts. Even little kids have been known to hack into Club Penguin to sabotage each other's games. While most of these incidents occur at home, the problems spill over to the classroom, making cyberbullying an issue teachers can't ignore. The answer isn't forbidding technology, say experts, so much as teaching kids right from wrong.

*Truth, truthiness, triangulation: A news literacy toolkit for a “post-truth” world We were guaranteed a free press, We were not guaranteed a neutral or a true press. We can celebrate the journalistic freedom to publish without interference from the state. We can also celebrate our freedom to share multiple stories through multiple lenses. But it has always been up to the reader or viewer to make the reliability and credibility decisions. It is up to the reader or viewer to negotiate truth. News literacy is complicated. MediaBreaker Critical Remix Tools - The LAMP Break-a-thons are short-term programs with The LAMP, and a perfect introduction for youth about how, why and for whom media are made. Each Break-a-thon focuses on a theme, like the Super Bowl, the MTV Video Music Awards, movie trailers or political advertising; youth then come together for one or two days to break media related to the theme. Participants compete in challenges throughout the event, win prizes and create their very own broken videos talking back to mass media. Past students tell us they never watch TV in quite the same way once they’ve done a Break-a-thon! With Break-a-thon in a Box, you have everything you need to host your own event, including tips, samples, templates and more, all at no cost. Plus, we’re always here to help.

Cyber Safety - Internet Safety Tips To Stay Safe Online : InformED It's always good to be cautious while on the internet. There are people in the cyber world who want to do harm to you or your computer. These are some good tips to keep in mind while you are surfing: Facebook, Google and others join The Trust Project, an effort to increase transparency around online news “Fake news” and other misinformation, online propaganda, and satirical content people believe is true have filled the web via search engines and social media, and have caused a rift in how people perceive today’s news organizations and the quality of their coverage. A nonpartisan effort called The Trust Project is working to address this situation by helping online users distinguish between reliable journalism and promotional content or misinformation. Today, a key part of that effort – called “Trust Indicators” – are going live on Facebook, offering easy-to-access, transparent information about a news organization’s ethics and practices. Here’s how this will work in practice: starting today on Facebook, an icon will appear next to articles in the News Feed. Facebook, Google, Bing and Twitter have all committed to displaying these indicators, though not all implementations are yet live.

Did Media Literacy Backfire? – Data & Society: Points Update: On March 9, 2018, I gave a talk expanding on my ideas in this post after a year of reflection/research. You can read the talk crib and watch the video at here: “You Think You Want Media Literacy…. Do you?”