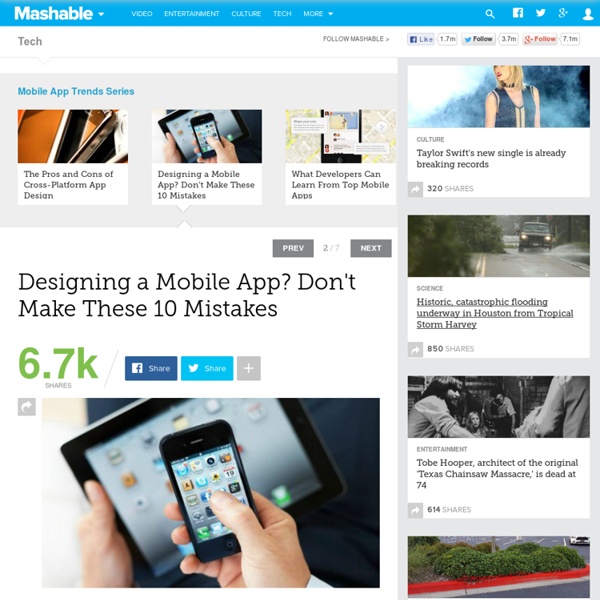 So you've already learned how to navigate the tricky world of cross-platform app design and worked through all of the common pitfalls of developing your app. You have a vision, some inspiration and maybe even a name that you know will be perfect. So ... now what? It's time to get down to the nitty-gritty and begin designing the structure, flow and features that will combine to form your finished mobile app. These mobile design “don’ts” will help any mobile designer avoid some messy obstacles, so make sure to keep them in mind. 1. Have a well-thought-out user flow ready to go before wireframes and designs begin. Another thing to pay attention to is making sure that key functional screens are close to the top rather than buried beneath multiple levels of navigational elements. 2. Everything a designer creates will have to go through a developer in order to bring those designs to life. In other words, the design should not dictate the functionality. 3. 4. 5. 6. 7. 8. 9. 10. Conclusion

What Language Should You Build Your App With? Mobile developers across the globe have developed and released more than 650,000 iPhone apps, 400,000 iPad apps, and 600,000 apps for Android. Are you thinking about building an app? A key step in the process is choosing the right programming language, which depends on how scrappy you're willing to be. Make sure you've researched cross-platform app design and reviewed the common pitfalls of developing your app. What languages have you used to build your app, and why did you choose that one? Objective-C Objective-C is the iOS standard, considerd the "correct" language, according to Stephen Kaliski, who works for NYC-based start-up Poptip. Advantages of using the iOS standard of Objective-C are the following: It's high performance, so you get to make use of the phone's actual functions, such as the camera. However, there are some difficulties with Objective-C programming. On the scrappier side, iPhone apps can be written as web apps. JavaScript (Plus CSS and HTML) Node.js Ruby

Mobile Apps Ideas - Find the Cool Ones Stanford's Free Developing Apps for iPhone and iPad 15 November '11, 08:05pm Follow Stanford University’s School of Engineering has a history of offering courses on some pretty interesting products for free online. Many of them have been through Apple’s iTunes U program, and this latest is no exception. Stanford’s iPad and iPhone Application Development (CS193P) course is now available for free on iTunes U. The course includes lectures and lessons focused on iOS 5 app development. Stanford’s stuff is generally very good and the ratings on this course are excellent so far. The prerequisites are C language and programming experience and/or general object-oriented programming and UNIX experience.

POP - Prototyping on Paper | iPhone App Prototyping Made Easy How to Avoid the Common Pitfalls of Mobile App Development The Mobile App Trends Series is supported by Sourcebits, a leading product developer for mobile platforms. Sourcebits offers design and development services for iOS, Android, Mobile and Web platforms. Follow Sourcebits on Twitter for recent news and updates. Mobile development has come a long way in the past few years. But as technology continues to introduce new and more innovating products at a rapid pace, there's room for many developers to make huge mistakes along the way — ones that could jeopardize their product or even their entire business. "I think that you can screw up five times before you get up in the morning, in ways that you never even thought of," says Josh Koppel, CCO and co-founder of ScrollMotion. We spoke with four leaders in mobile app development about the common issues developers often face when create a new product. Android or iOS? A common issue developers run into is deciding which operating system to run first: Android or iOS. Testing the Waters With Your App

How to become a mobile app millionaire | Technology You have an idea for an app? Of course you do. Everyone has an idea for an app. Step one: the idea This bit's really important: you need to work out very quickly whether or not your idea is rubbish. Step two: the spec Speak to someone who has built an app before, or knows how the process works. Step three: the money Most startups kick off with "friends and family" funding – a mini pot of cash raised in return for small equity. Step four: the build This is the really tricky bit. The alternative, increasingly popular route is to make it yourself. Step five: the marketing If possible, be 17 years old.

10 Things to Plan for Mobile App Dev David Tucker is a principal architect at Universal Mind. As the resident Apple and Adobe expert, he works closely with Universal Mind’s clients to develop rich user experiences that leverage many of today’s exciting new development platforms. Follow David on Twitter @mindmillmedia. Many companies have mobile apps at the top of their to-do lists, but while churning out a quick app is fairly straightforward, developing a strategic application or digital “solution” is considerably more complex. Here are 10 things to consider before developing your app. 1. When developing a digital solution strategy, first examine your organization’s goals for the program. 2. The next step is to understand who your target users are, their goals and requirements, and the technologies they use. 3. Spending time with your target users is the only way to ensure you really understand what they are looking for in a mobile application. 4. Don't try to tackle the whole problem at once. 5. 6. 7. 8. 9. 10.

Sizes of iPhone UI Elements How to detect the current device size and kind Other dimensions common to all screen sizes: Points vs. Pixels Apple introduced retina displays starting with the iPhone 4. iOS supports high resolution displays via the scale property on UIScreen, UIView, UIImage, and CALayer classes. To refer to an image in your code (or in Interface Builder), use the filename of the standard sized image. iOS will automatically detect and use the @2x version if the device supports it: imageView.image = [UIImage imageNamed:@"button.png"]; Adjusting Sizes Click here to see how to adjust View Frames and Bounds. Additional References Apple Documentation: Points vs.

6 Tools to Build a Mobile App on the Cheap The Mobile App Trends Series is presented by Sourcebits, a leading product developer for mobile platforms. Sourcebits offers design and development services for iOS, Android, Mobile and Web platforms. Follow Sourcebits on Twitter for recent news and updates. The massive growth of the app market has coincided with the creation of a parallel niche industry — the proliferation of accessible, low-cost development alternatives to traditional shops and agencies. But not all brands — or industries altogether — require diverse, expansive functionality in their apps. As the mobile applications market moves toward $25 billion per year, according to a MarketsandMarkets report, non-traditional development opportunities are emerging in a number of forms. Below are six platforms carving out their space in the market. 1. PhoneGap leverages JavaScript to allow for the development of apps in HTML5 and CSS3 — highly capable languages that are now standard to most mobile devices. 2. 3. 4. 5. 6. Conclusion