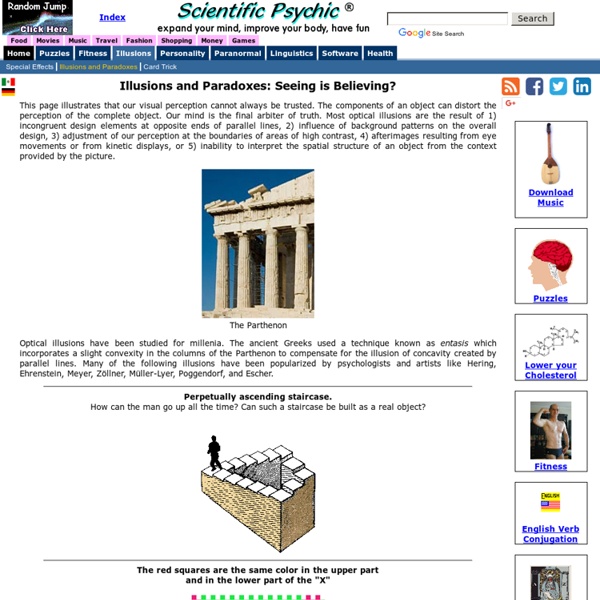 This page illustrates that our visual perception cannot always be trusted. The components of an object can distort the perception of the complete object. Our mind is the final arbiter of truth. Most optical illusions are the result of 1) incongruent design elements at opposite ends of parallel lines, 2) influence of background patterns on the overall design, 3) adjustment of our perception at the boundaries of areas of high contrast, 4) afterimages resulting from eye movements or from kinetic displays, or 5) inability to interpret the spatial structure of an object from the context provided by the picture. The Parthenon Optical illusions have been studied for millenia. Perpetually ascending staircase. The red squares are the same color in the upper part and in the lower part of the "X" The diagonal lines are parallel. There are no gray spots at the corners of the squares. Stairway between corners of a flat square. The rows of black and white squares are all parallel. Impossible triangle.

Ebbinghaus Illusion - The Illusions Index Crane, T., and French, C., 2016. The Problem of Perception. In: Zalta, E. N., ed. The Stanford Encyclopedia of Philosophy. Metaphysics Research Lab, CSLI, Stanford University. Color Survey Results « xkcd Who in the rainbow can draw the line where the violet tint ends and the orange tint begins? Distinctly we see the difference of the colors, but where exactly does the one first blendingly enter into the other? So with sanity and insanity. The Evolutionary Psychology of Human Sex and Gender By Daniel Pouzzner, 2000-Apr-11/12 Sexuality is an indispensable mechanism whereby biological evolution bridged the immense gap between asexual/Lamarckian unicellular organisms, and the now plainly preeminent humans. For tens of millions of generations, the lineage leading to humanity has been formed and continued exclusively by sexual procreation. The precise microbiological mechanics of sexuality vary widely from species to species, while the functional consequences - strictly sexual procreation, in which each individual has precisely two parents, each contributing roughly half of the individual's genome - is absolutely conserved.

Impossible Triangle - The Illusions Index The Impossible Triangle (also known as the Penrose Triangle or the Impossible Tribar) was first created by Oscar Reutersvärd (1915 - 2002), a Swedish graphic artist known as the ‘father of the impossible figure’. It is anecdotally, but widely reported that he created it in 1934, aged 18 while doodling as a student in his Latin class. The illusion was independently discovered later and popularised by Lionel Sharples Penrose (1898 -1972), a British psychiatrist, geneticist, and mathematician, and his son Sir Roger Penrose (1931 -), a British mathematician, physicist and philosopher of science. Penrose and Penrose published the illusion in the British Journal of Psychology in 1958. The Penrose Triangle is an impossible figure (or impossible object or undecidable figure): it depicts an object which could not possibly exist.

How To Train Yourself To Be In The Mood You Want Dec 27, 2010 When you have major changes going on in your life, or you’re just frustrated about where you are, it’s easy to get trapped in a cycle of depression, bad moods and frustration. I know, I’ve been there … and when I’m not careful, I still get there more than I want to. The "Johnny Depp Effect" - An evolutionary explanation for homosexuality Who is more attractive as a mate? A guy who is kind or a guy who is cruel? A guy who is sensitive or a guy who lacks empathy ? A guy who is physically attractive or a guy who is homely? A guy who can appreciate art or the guy who only appreciates ESPN? Now consider who is more likely to be gay.

Expand Your Mind To expand your mind you need to learn new facts and develop new modes of thinking that will make the information that you already know more useful. Solving the following problems requires a combination of world knowledge, mathematics, common sense, logic, and science (chemistry, physics). This is not an IQ test. There is no time limit. To expand your mind, do not look at the answers until after you have made an honest effort to figure out the problems.

Eve and the Identity of Women: 7. Eve & Lilith In an effort to explain inconsistencies in the Old Testament, there developed in Jewish literature a complex interpretive system called the midrash which attempts to reconcile biblical contradictions and bring new meaning to the scriptural text. Employing both a philological method and often an ingenious imagination, midrashic writings, which reached their height in the 2nd century CE, influenced later Christian interpretations of the Bible. Inconsistencies in the story of Genesis, especially the two separate accounts of creation, received particular attention.