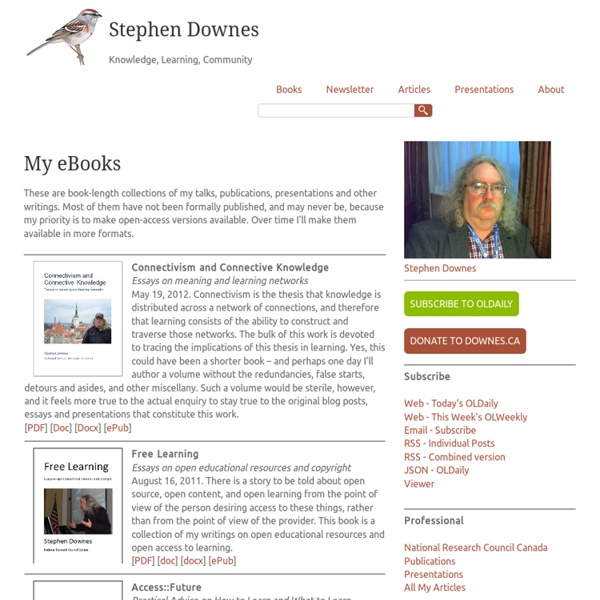 Kirkpatrick's Revised Four Level Evaluation Model I had an interesting discussion with Clark Quinn on using Kirkpatrick's model in learning processes other than courses. Clark argues that use of Kirkpatrick’s model is only for courses because training is the dominant discussion on their web site. I disagree and wonder if perhaps it is more of a “not invented here” hesitation because advancing concepts to the next level has often been a primary means of moving forward. 21st Century Initiative About the initiative CCL launched a pan-Canadian program to advance the work of the 21st Century Learning Initiative within Canada in September 2005. The purpose of this program was to engage Canadians in dialogue about new ways of thinking about learning systems, based on the research synthesis provided by the 21st Century Learning Initiative. Established in 1995, the Initiative, led by John Abbott, is a network of academics, researchers, policy-makers and practitioners from numerous countries.

Educause 2012: 5 ways online learning is disrupting education As one of the hot buzz terms and concepts in education this year, massive open online courses (MOOCs) are reshaping the way institutions offer learning services, and Michael B. Horn, the co-founder and executive director of Innosight Institute, specializes in disruption. Horn spoke on Wednesday at the Educause 2012 conference in Denver, and Education Dive sat in on his talk about the changes that are currently underway, ushering in new models in higher education. As it happens, Horn did not stop at higher ed and went on to address what MOOCs could eventually do to high schools as well.

The Problem of "Pedagogy" in a Web 2.0 Era Pedagogy | Viewpoint The Problem of 'Pedagogy' in a Web 2.0 Era By Trent Batson06/15/11 Students Reflect on Their Own Learning We are always talking about the ideal education should be a learner-centered setting. Learners can be in charge of their learning with options to different paths and paces. Learners will participate in the designing of their learning processes. So the first thing of all is that they have their voices heard. More and more teachers have their students reflect on their own learning experience. The Need for an Evidence-based Approach to Demonstrating Value When I read the Editor’s View column in the current issue of IWR (Information World Review, Nov/Dec 2011) the words seemed familiar. The column began “Evaluating the shortlist for the IWR Information Professional of the Year Award, one of the judges noted that at a time when the library profession was suffering from the economic turmoil there was a need for an evidence-based approach to demonstrating the value for libraries“. Checking my email it seems that these were the words I used when I voted for Ian Anstice as this year’s IWR Information Professional of the Year. As described in the announcement about the award published in IWR “The judges – all previous winners- gave Anstice, a branch manager of a public library in Cheshire, the honour for his work in documenting the changes taking place across the public library sector as a whole“. But what does “evidence-gathering” entail?

What Americans Keep Ignoring About Finland's School Success - Anu Partanen - National The Scandinavian country is an education superpower because it values equality more than excellence. Sergey Ivanov/Flickr Everyone agrees the United States needs to improve its education system dramatically, but how? One of the hottest trends in education reform lately is looking at the stunning success of the West's reigning education superpower, Finland.

Ten meta-trends impacting learning In a world where libraries are completely reinventing themselves, where universities and schools are moving away from labs to BYOD, and where the focus of everything seems to be on mobiles —what will be the role of technology in the next decade? What do leading institutions need to be doing now to prepare? What are the strategies that will provide them the most flexibility?