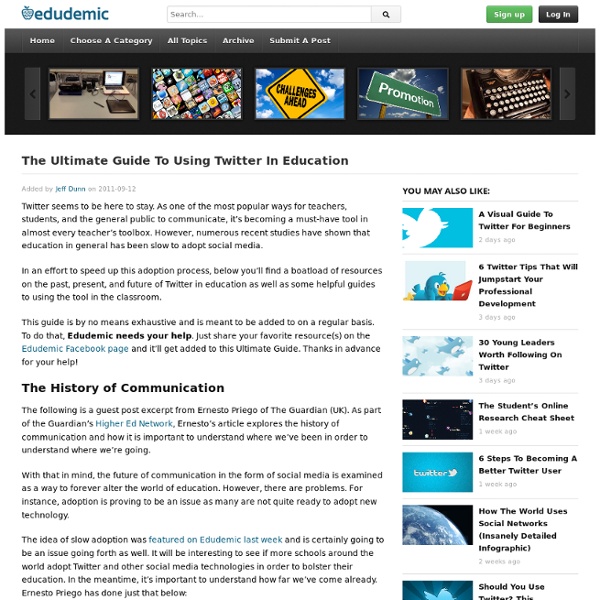 Twitter seems to be here to stay. As one of the most popular ways for teachers, students, and the general public to communicate, it’s becoming a must-have tool in almost every teacher’s toolbox. However, numerous recent studies have shown that education in general has been slow to adopt social media. In an effort to speed up this adoption process, below you’ll find a boatload of resources on the past, present, and future of Twitter in education as well as some helpful guides to using the tool in the classroom. This guide is by no means exhaustive and is meant to be added to on a regular basis. To do that, Edudemic needs your help . The History of Communication The following is a guest post excerpt from Ernesto Priego of The Guardian (UK). With that in mind, the future of communication in the form of social media is examined as a way to forever alter the world of education. Read the full article on Guardian.co.uk here . The Nuts and Bolts of Twitter In Education The Twitter Experiment Dr.

Twitter Page 3/14 1. Qu'est-ce que Twitter ?2. Learn English on Twitter What's Twitter you ask? Twitter is a tool that you can use to send messages of up to 140 characters to a group of followers while you also follow others. To understand, here is a video called Twitter in Plain English which provides a good introduction: This is a great tool that works with any device that you use to connect to the Internet. The messages are short, and easy to read. Teachers Teaching Teachers, on Twitter: Q. and A. on 'Edchats' A screenshot from TweetDeck showing, left, a recent #Edchat stream and, right, the #Engchat stream at the same time. Like other groups with shared interests, from epidemiologists to James Joyce fans to locked-out N.F.L. players, teachers are turning to Twitter to collaborate, share resources and offer each other support. Many, in fact, are using it to take professional development into their own hands, 140 characters at a time. Each week, thousands of teachers participate in scheduled Twitter “chats” around a particular subject area or type of student.

Is Twitter Being Used As A Training Tool? Twitter, a social networking platform used for microblogging, is a free service that lets you send the briefest of messages (with a maximum of 140 characters) to everyone in your network. It marries the mass appeal of blogging with the speed and ease of text messaging. There has been a growing interest in how to use these new forms of social media for learning & development. Driving this interest is the fact that Millennials, or those born after 1981, make up 22 percent of the workforce now and will grow to comprise 46 percent of the workforce by the year 2020.

How Can Twitter be used as a Learning Tool? If you still haven’t got your head around Twitter, don’t worry! You’ll get there. And it really is a lot more simple than you might think. It’s basically a free social networking tool that connects you with other people and information. People write “tweets” (or posts) of up to 140 characters about what they’re up to, what they’re reading, anything really or they throw a question out there to be answered.

Three Practical Ideas for Using Twitter in E-Learning Twitter’s all the rage. Some people love it. Some people hate it. But many people really don’t know much about it or don’t do much with it. I’ll have to admit, I have mixed feelings about Twitter (and much of the other social media). Twitter As a Learning Tool. Really. - 2009 Savvy trainers are using micro-blogging to foster informal learning and meet likeminded peers. Here's a scenario to give trainers pause. You're presenting at a conference. Minutes into your session, a number of people are tapping furiously at their phones or reading incoming messages. Most of these people get up and leave the room, while another bunch trickles in. Manchester Head Teacher's Conference: Be careful what you tweet. - Creative ICT News Yesterday, I spent the day at the Hallmark Hotel in Cheadle Hulme for the annual Manchester Head teacher's Conference at the invitation of Dave Watson, headteacher at Chorlton Park where I teach three mornings a week. On the bill were Professor Stephen Heppell and both the former and current headteachers from Robin Hood school in Birmingham. The idea was to prod and provoke by demonstrating some interesting and innovative developments in technology here in England and around the world. Originally I was hoping to get the opportunity to put some of that into a local context by demonstrating some of the excellent blogging that goes on at Chorlton Park, but, for whatever reason, that didn't happen. Their loss. I feel I have to make the point that the coffee served by the hotel was the worst I have ever tasted -truly dreadful and prompted discussions as to whether someone had mixed the tea with the coffee as the taste was completely indeterminate.

Twitter Tweets for Higher Education I love Twitter.com. I usually post a couple of items a day, on average, and tend to follow and interact others who also post in a moderate fashion. Some people post dozens of twits a day and use Twitter as a kind of instant messaging client. I see, and use it, more as a mini-blog. Professors experiment with Twitter as teaching tool Facebook may be the social medium of choice for college students, but the microblogging Web tool Twitter has found adherents among professors, many of whom are starting to experiment with it as a teaching device. People use Twitter to broadcast bite-sized messages or Web links and to read messages or links posted by others. It can be used as a source of news, to listen to what people in certain groups are talking about, or to communicate with experts or leaders in certain fields. Marquette University associate professor Gee Ekachai uses Twitter to discuss what she's teaching in class with students and connect them with experts in the field of advertising and public relations. Instructor Linda Menck, who also teaches at Marquette, encourages students to include social media as a strategy in marketing campaigns for clients. Twitter is helping these professors build community in their classes in a way that appeals to some members of a Facebook-addicted generation.

The Top 100 Twitter Tools of 2012 (Categorized) This post is #9 in DailyTekk’s famous Top 100 series which explores the best startups, gadgets, apps, websites and services in a given category. Total items listed: 115. Time to compile: 8+ hours. Follow @DailyTekk on Twitter to make sure you don’t miss a week! Twitter is my social network of choice (see our recent article: Inside Twitter). HOW TO: Get the Most Out of Twitter #Hashtags One of the most complex features of Twitter for new users to understand is the hashtag, a topic with a hash symbol ("#") at the start to identify it. Twitter hashtags like #followfriday help spread information on Twitter while also helping to organize it. The hashtag is a favorite tool of conferences and event organizers, but it's also a way for Twitter users to organize themselves: if everyone agrees to append a certain hashtag to tweets about a topic, it becomes easier to find that topic in search, and more likely the topic will appear in Twitter's Trending Topics.

The A-Z Dictionary of Educational Twitter Hashtags Whether you’re a new or seasoned Twitter user, you likely come across confusing hashtags that probably look like a bunch of nonsense. First, What’s A Hashtag? The # symbol, called a hashtag, is used to mark keyword or topic in a Tweet. Any Twitter user can categorize or follow topics with hashtags.Those hashtags (usually) mean something and are a great way to get a tweet to appear in search results or discussion monitoring. For example, the popular #edchat hashtag is used by thousands of users every Tuesday.