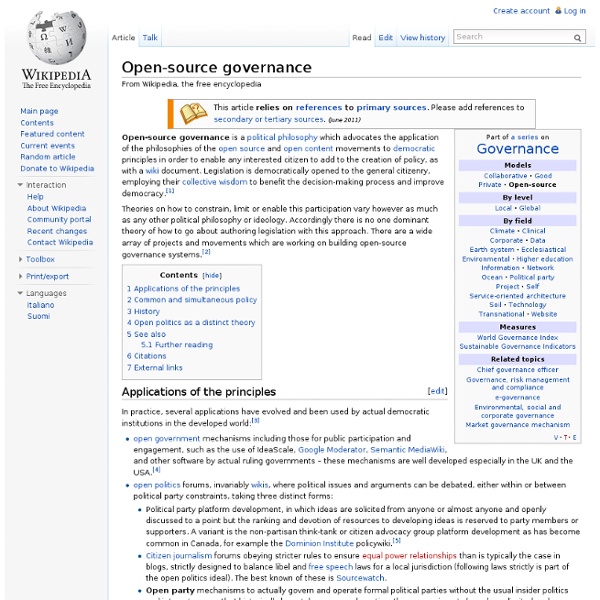 Open-source governance is a political philosophy which advocates the application of the philosophies of the open source and open content movements to democratic principles in order to enable any interested citizen to add to the creation of policy, as with a wiki document. Legislation is democratically opened to the general citizenry, employing their collective wisdom to benefit the decision-making process and improve democracy.[1] Theories on how to constrain, limit or enable this participation vary however as much as any other political philosophy or ideology. Accordingly there is no one dominant theory of how to go about authoring legislation with this approach. Applications of the principles[edit] In practice, several applications have evolved and been used by actual democratic institutions in the developed world:[3] Common and simultaneous policy[edit] These goals for instance were cited often during the Green Party of Canada's experiments with open political platform development.

Open Source Life: How the open movement will change everything Consider this: in just a few short years, the open-source encyclopedia Wikipedia has made closed-source encyclopedias obsolete — both the hard-bound kind and the CD-ROM or commercial online kind. Goodbye World Book and Brittanica. Sure, these companies still exist, but their customer base is rapidly shrinking as more and more people would rather go with Wikipedia — it’s free, it’s easy to use, and it’s much, much more up-to-date. This is but one example of how the concept of open source has changed our lives already. Over the next 10 years or so, we’ll be seeing many more examples, and the effects could change just about every aspect of our lives. The open-source concept was popularized through GNU and the GPL, and it has spread ever since, in an increasingly rapid manner. Now consider this: the open-source concept doesn’t have to just apply to software. Schools.

Internet Archive: Free Download: Libre Culture: Meditations on F SILK: Social Innovation Lab Kent SILK is a small team based within Kent County Council that was set up in 2007 to ‘do policy differently’. Over the past 4 years we have been doing projects which have demonstrated the benefits of working in a different way and have developed a Methodology and Toolkit which provide a structure for the way we work. We believe that the best solutions come from the people who are closest to the issue; this could be service users, residents or frontline staff. We're really pleased that SILK has been featured in Parsons Innovation Constellation. Each project will fall into one of three diamonds: Strategic / Policy, Service Re-design, or Creating Sustainable Communities: Once the type of project has been identified it will follow four phases: Initiate | Create | Test | Define as shown in our Project Planner: The Method Deck can then be used to choose which methods should be used during each phase of the project: If you have any questions about our Methodology or Toolkit please get in touch.

Global mapping of technology for transparency and accountability | Transparency & Accountability Initiative As internet and mobile phone use increases, technology is transforming the field of transparency and accountability making it an increasingly dynamic space across the globe. Technology is helping to improve citizen participation in decision-making and producing new ways of identifying public service challenges through processes such as ‘data mashing’. This paper documents current trends in the way technology is being used to promote transparency in different parts of the world. Our research finds promising success stories alongside less accomplished examples. The paper includes a summary of the key findings and recommendations for further research in key areas of this field.

Government Are we on the cusp of seeing dramatic changes in the way governments operate by publishing and consuming open data? Mark Headd, Developer Evangelism at Accela seems to think so. Earlier this year, Croatian political party ORaH published a new policy that relies heavily on open source solutions, addresses the dangers off vendor lock-in, and insists on open document standards. Best of all, they did it the open source way. The Open Election Data Initiative wants to give access to election data for a true picture of an election process, including how candidates are certified, how and which voters are registered, what happens on election day, whether results are accurate, and how complaints are resolved. The Government of India (GOI) has adopted a comprehensive and supportive open source policy. The impact of technology on society and the economy continues to excite and challenge government. The history of creativity and how the rise of it has propelled open data forward today.

Ideal Government A More Social Open Government Earlier this week, Federal CTO Aneesh Chopra and OIRA Administrator Cass Sunstein jointly released an inquiry about the future of open government-- specifically, they asked for insight on three things: How can regulations.gov, one of the primary mechanisms for government transparency and public participation, be made more useful to the public rulemaking process?OMB is beginning the process of reviewing and potentially updating its Federal Web Policy. What policy updates should be included in this revision to make Federal websites more user-friendly and pertinent to the needs of the public? We have specific, detailed responses to each of these questions, based on our experiences in encouraging public engagement, but first, it’s worth talking about how far we’ve come. If government does not take input from its citizens seriously, we do not have a democracy at all. In that spirit, we present thoughts about the inquiries itself, and how things can be made better. 1. Improve the language 3.

Wired 11.11: Open Source Everywhere Open Source Everywhere Software is just the beginning … open source is doing for mass innovation what the assembly line did for mass production. Get ready for the era when collaboration replaces the corporation. By Thomas Goetz Cholera is one of those 19th-century ills that, like consumption or gout, at first seems almost quaint, a malady from an age when people suffered from maladies. Since cholera kills by driving fluids from the body, the treatment is to pump liquid back in, as fast as possible. "It's a health problem, but it's also a design problem," says Timothy Prestero, a onetime Peace Corps volunteer who cofounded a group called Design That Matters. But the team needed more medical expertise. ThinkCycle's collaborative approach is modeled on a method that for more than a decade has been closely associated with software development: open source. Open source, of course, is the magic behind Linux, the operating system that is transforming the software industry. In the Beginning Linus

Open access (publishing) Open access logo, originally designed by Public Library of Science. Whilst no official open access logo exists, organisations are free to select the logo style that best supports their visual language. Other logos are also in use. 9-minute video explaining open access Open access (OA) refers to online research outputs that are free of all restrictions on access (e.g. access tolls) and free of many restrictions on use (e.g. certain copyright and license restrictions).[1] Open access can be applied to all forms of published research output, including peer-reviewed and non peer-reviewed academic journal articles, conference papers, theses,[2] book chapters,[1] and monographs.[3] Definitions[edit] On the occasion of the tenth anniversary of the Budapest Open Access Initiative in 2012, Peter Suber is interviewed about his views on past, present and future developments in open access to scholarly publications The Budapest statement defined open access as follows: Gratis and libre OA[edit]