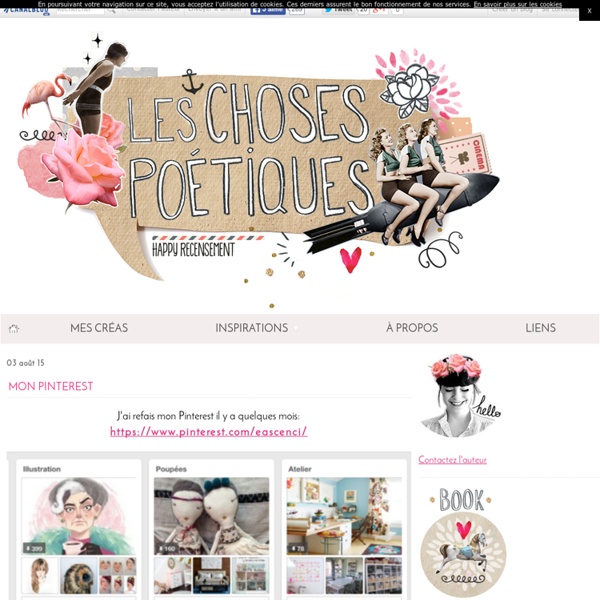 Justinyvette The Jealous curator i’m jealous of javier piñón Oh boy, I think I have a new crush… yep, I do. Brooklyn based artist Javier Piñón {and his cowboys} had me at howdy. These boys are from three different series: Chairs, Chandeliers, and Floods… and I love them all very, very much. {I discovered Javier’s work through Fine Line Magazine. Les cas sociaux du net | L'intelligentsia 2.0 la VraieVie de JulieMartin the magic behind the magic Hi everyone! This post is actually about two months overdue, but I kept putting it off in the hopes that I would feel inspired again. I haven’t updated this tumblr in a few months and before that, hadn’t been updating all that frequently. While I still love Disney and adore concept art and appreciate everyone who followed and affiliated and contributed to this blog, I’ve found that I don’t have the passion needed to update this tumblr on a regular basis. This is my official “~closure~” announcement — I say ~closure~ because I’m trying to make this post as not-serious as possible! Thanks so very much to everyone who followed, and I’ll close with a link to the song that started my fascination with Disney concept art: If I Never Knew You. Filed under disney Pocahontas A concept design for Governor Ratcliffe Source: Pocahontas special edition DV Filed under disney pocahontas The Little Mermaid Source: the Little Mermaid special edition DVD Filed under disney the little mermaid Cinderella

If we don't, remember me. CMYK A QUIET WORD - Tamasin Cave & Andy Rowell Lobbying is a two-billion pound industry, answering to no-one and operating out of public sight. This book shows just how effectively the voice of public interest is being drowned out by the word in the ear from the professional persuaders of the lobbying industry. And if you’ve never heard about them, that’s because the most effective lobbying goes unnoticed. Our design echoes this dichotomy – the noise of the influence industry, driven by it’s silent mechanics. ybuffet's posterous - My press review Les Textapes d'Alice / saison III Les Textapes d'Alice / saison III InkBlooD, LE site/blog/C.V en ligne qui va te faire apprendre des tas de trucs !