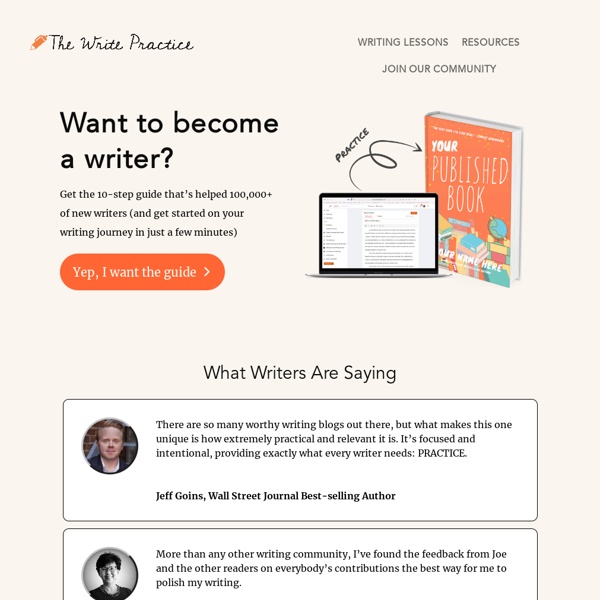 TRADITIONAL CATHOLIC PRAYERS A partial indulgence is granted to the faithful, who recite devoutly, according to any legitimate formula, the acts of the theological virtues (Faith, Hope, Charity) and of Contrition. Each act is indulgenced. In the Name of the Father, and of the Son, and of the Holy Spirit, Amen. OUR FATHER Our Father, Who art in Heaven, hallowed be Thy Name.

The Very Best Articles on Writing in 2014 Practice means what it says: writing is something to be done over and over, something that improves through the repetitive doing but that needs not be done perfectly. ~Julia Cameron It’s that time again, it’s the end of the year roundup! Writing Fantasy Last night, A Game Of Thrones author George R.R. Martin took to the stage at the Sydney Opera House to discuss his popular fantasy series, the spin-off HBO TV show and his craft as a writer. Below are ten kernels of wisdom that could help budding authors write their own fantasy saga. (Surprisingly, ‘take your time’ isn’t one of them.) Photo: Getty Images How to Break Up Your Novel into Definable Sections Last week I started diving into the three-act structure and explained that such structure is random and arbitrary. While many writing instructors swear by this structure, I feel it’s too pat and restrictive to be a “one size fits all,” and, really, it’s the story that should determine how many acts it needs. And even with that, it’s up to the writer to decide if he wants to break his story up into acts or sections.

11 Most Important Philosophical Quotations 1. “The unexamined life is not worth living” – Socrates (470-399 BCE) Socrates’ [wiki] belief that we must reflect upon the life we live was partly inspired by the famous phrase inscribed at the shrine of the oracle at Delphi, “Know thyself.” The key to finding value in the prophecies of the oracle was self-knowledge, not a decoder ring. Blue Flame Magick (My local spirits postings will continue after this post) Normally I’d be posting a book review here according to my schedule (did you even notice I have a schedule of when I post what?) but I decided this week to finally get around to doing the book meme. When I started this blog the “What 5 Books do you recommend as an occultist” posts were popular, but I never made one, it’s come and gone a few times, and I never bothered with it. What I always wants to talk about, and I will now is such a list with a twist. What 5 fiction books do you recommend as a sorcerer?

Lessons learned in a writing journey Author Michael Smart (see my chat with Michael here) has a pet peeve about using too many words when fewer would do. If you haven’t read his riveting Bequia Mysteries, set in the unusual locale of St. Vincent and the Grenadines, you’re missing out. All three are tightly-woven, action-packed, and sprinkled with the authentic island culture of their Caribbean setting. Michael published “Kill These Words! 10 Easy Rules to Enliven Your Writing” about a month ago on his blog and has given me permission to republish it here: Action Stories Think “action scene,” and you probably think of the Hollywood version: A character is thrust into high-stakes, physical drama (a gunfight, a daring rescue, a desperate escape) that changes her in some important way, and moves the action forward. Action scenes serve the same function in your fiction, but they need not be over-the-top to be effective. A surprise phone call, an unexpected visit, or an ill-timed delay will force your character to respond quickly (rather than reflect), and allows you to advance the plot without miring it in long descriptive passages and explanations. The key to writing action scenes is to make sure that something happens that impels your protagonist to act, reveals her capacity to deal with problems, and affects future events in the story. “The only requirement of an action scene is that it rely in part upon physical movement through the space you’ve created, and evoke a sense of time passing,” says Jordan E.

Novel Plotting Worksheet Want to help support the author? There are hundreds, possibly thousands of articles on novel plotting on the web. There are a few plotting worksheets, with spaces and questions for you to fill in your own work – some of them are good. But I couldn’t find what I wanted, so I decided to make it and share it with you all. Speed reading History[edit] Psychologists and educational specialists working on visual acuity used a tachistoscope to conclude[1] that, with training, an average person could identify minute images flashed on the screen for only one five-hundredth of a second (2 ms). Though the images used were of airplanes, the results had implications for reading.[citation needed] Methods[edit] The teleological fallacy and our common delusion of control The teleological fallacy improperly infers causes from outcomes. A good or bad outcome of an initiative by a general counsel does not derive, necessarily, from a good or bad cause, be it an idea, design or implementation. A loss at trial doesn’t mean the legal work done was shoddy. A patent granted doesn’t prove the application was well drafted and prosecuted. Outside counsel costs might rise even though a number of solid steps were taken to moderate those costs.

8 Writing Techniques to Win You a Pulitzer Today’s guest post is from writer Joe Bunting, who blogs at The Write Practice. We all know there are novels and then there are “literary” novels. When you read Margaret Atwood, it just feels different than when you read Tom Clancy. And for some reason, these literary novels are the ones that win all the most prestigious awards like the Pulitzer Prize, the Man Booker Prize, and the Nobel Prize for Literature. Literary authors are known for their unique voices and experimental styles. You might have learned not to write run-on sentences in school or to avoid beginning a sentence with “and,” but literary writers often seem to flaunt their rule-breaking ways.

Writing Historical Ethics: Rules for Writing Historical Novels These are my seven guidelines. 1. Free Printables for Writing Your Novel Are you interested in writing a novel but you don’t want to start? Do you learn by doing? Do you want easy-to-use worksheets to help novel writing made sense? I’ve pulled together a ton of FREE Printables for you.