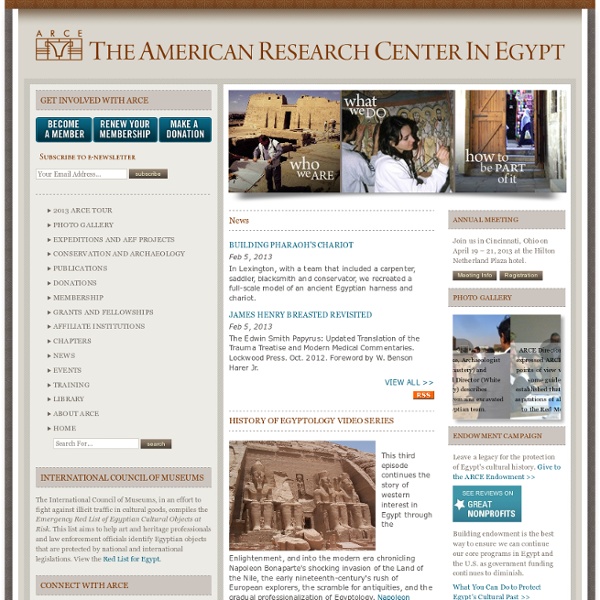 It's been an eventful year in Egypt! This is the perfect time to look back; here are some of our highlights. Luxor: Nearly 1000 jobs created in Luxor at Deir El Shelwit, Qurna, and Theban Tomb 110 to help mitigate the devastating effects of the overwhelming economic downturn in tourism. Khonsu Temple: Completed conservation, working on signage Luxor: 105 graduates of archaeological, conservation, and photography field schools Cairo: Published The Tomb Chapel of Menna Cairo: Initiated archival project for USAID funded projects. Images, maps, drawings, and reports make this one of the world's most significant archives for Egyptian heritage preservation. Cairo: Visitor plans for Historic Cairo are completed.

Tutankhamun Tutankhamun (alternatively spelled with Tutenkh-, -amen, -amon) was an Egyptian pharaoh of the 18th dynasty (ruled ca. 1332 BC – 1323 BC in the conventional chronology), during the period of Egyptian history known as the New Kingdom. He is popularly referred to as King Tut. His original name, Tutankhaten, means "Living Image of Aten", while Tutankhamun means "Living Image of Amun". Interactive Dig Sagalassos - City in the Clouds In 1706, Paul Lucas, traveling in southwest Turkey on a mission for the court of Louis XIV, came upon the mountaintop ruins of Sagalassos. The first Westerner to see the site, Lucas wrote that he seemed to be confronted with remains of several cities inhabited by fairies. Later, during the mid-nineteenth century, William Hamilton described it as the best preserved ancient city he had ever seen. Toward the end of that century, Sagalassos and its theater became famous among students of classical antiquity. Yet large scale excavations along the west coast at sites like Ephesos and Pergamon, attracted all the attention. Gradually Sagalassos was forgotten...until a British-Belgian team led by Stephen Mitchell started surveying the site in 1985.

Interactive Dig Hierakonpolis The largest site from the Pre- and Protodynastic period (3800-3100 B.C.), Hierakonpolis the City of the Hawk is the most important site for understanding the foundations of Egyptian civilization. Here, nearly 400 miles south of Cairo, archaeological investigation over the past century has confirmed this vast site's central role in the transition from prehistory to history. This season we are running a small field school, with Egyptian and American students, the latter from the University of Illinois at Urbana-Champaign. We'll be excavating more of the breweries and possibly doing some experimental beer making! After that, we hope to check in on the elite cemetery and the Fort.

Jean-François Champollion Jean-François Champollion (23 December 1790 – 4 March 1832) was a French scholar, philologist and orientalist, decipherer of the Egyptian hieroglyphs. Biography[edit] Champollion was the last of seven children (two of whom died before he was born). He was raised in humble circumstances; because his parents could not afford to send him to school, he was taught to read by his brother Jacques. Jacques, although studious and largely self-educated, did not have Jean-François' genius for language; however, he was talented at earning a living, and supported Jean-François for most of his life.[1]

Kara Cooney Dr. Kathlyn M. Cooney aka Dr. Kara Cooney is an Egyptologist and Assistant Professor of Egyptian Art and Architecture at UCLA. She was awarded a PhD in 2002 by Johns Hopkins University for Near Eastern Studies. Arachne Arachne is the central Object database of the German Archaeological Institute (DAI) and the Archaeological Institute of the University of Cologne, administrated by Reinhard Foertsch. Arachne is intended to provide archaeologists and Classicists with a free internet research tool for quickly searching hundreds of thousands of records on objects and their attributes. This combines an ongoing process of digitizing traditional documentation (stored on media which are both threatened by decay and largely unexplored) with the production of new digital object and graphic data.

Institute of Egyptology, Waseda University Institute of Egyptology 120-3-103, 513, Waseda-tsurumaki-cho Shinjuku-ku, Tokyo 162-0041, Japan TEL & FAX: 81-3-3203-1879World Wide Web: Click here for Japanese version Petra Petra (Arabic: البتراء, Al-Batrāʾ, Ancient Greek Πέτρα) is a historical and archaeological city in the southern Jordanian governorate of Ma'an that is famous for its rock-cut architecture and water conduit system. Another name for Petra is the Rose City due to the color of the stone out of which it is carved. The site remained unknown to the Western world until 1812, when it was introduced by Swiss explorer Johann Ludwig Burckhardt. It was described as "a rose-red city half as old as time" in a Newdigate Prize-winning poem by John William Burgon.

Met Museum of Art / Archaeological Fieldwork The Met has been involved in the study of antiquity since its founding in 1870. Today, we participate in active excavations at Dahshur, Lisht, and Malqata in Egypt; Tell Mozan and Umm el Marra in Syria; and at Palaikastro in eastern Crete and Amorium in Turkey. These activities are critical to understanding the cultures represented in the Museum's collections, and fundamental to the Met's role as an international institution. During the Middle Ages (ca. A.D. 650–1000), Amorium, in central Anatolia, was an important Byzantine city, which at its height in the early ninth century A.D. was the third largest in the Byzantine Empire, after Constantinople (Istanbul) and Thessalonica (Thessaloniki, Greece).

Angkor Angkor (Khmer: អង្គរ or នគរ, "Capital City")[1][2] is a region of Cambodia that served as the seat of the Khmer Empire, which flourished from approximately the 9th to 15th centuries. The word Angkor is derived from the Sanskrit nagara (नगर), meaning "city".[3] The Angkorian period began in AD 802, when the Khmer Hindu monarch Jayavarman II declared himself a "universal monarch" and "god-king", and lasted until the late 14th century, first falling under Ayutthayan suzerainty in 1351. A Khmer rebellion resulted in the 1431 sacking of Angkor by Ayutthaya, causing its population to migrate south to Longvek. The ruins of Angkor are located amid forests and farmland to the north of the Great Lake (Tonlé Sap) and south of the Kulen Hills, near modern-day Siem Reap city (13°24′N, 103°51′E), in Siem Reap Province. Historical overview[edit] Map of the Angkor region

The Tell Basta Project Five days of extensive 3D scanning lie behind us and we have managed to document all areas and fragments from the temple as planned. Our surveyors, Thomas and Mark, left this morning, quite tired after working day and night! During the day they were busy in the Old Kingdom necropolis and the Middle Kingdom palace, using a 3D laser scanner. 3D-scanning the Old Kingdom necropolis using a laser scanner Machu Picchu Machu Picchu (in hispanicized spelling, Spanish pronunciation: [ˈmatʃu ˈpiktʃu]) or Machu Pikchu (Quechua machu old, old person, pikchu peak; mountain or prominence with a broad base which ends in sharp peaks,[1] "old peak", pronunciation [ˈmɑtʃu ˈpixtʃu]) is a 15th-century Inca site located 2,430 metres (7,970 ft) above sea level.[2][3] It is located in the Cusco Region, Urubamba Province, Machupicchu District in Peru.[4] It is situated on a mountain ridge above the Sacred Valley which is 80 kilometres (50 mi) northwest of Cusco and through which the Urubamba River flows. Most archaeologists believe that Machu Picchu was built as an estate for the Inca emperor Pachacuti (1438–1472). Often mistakenly referred to as the "Lost City of the Incas", it is perhaps the most familiar icon of Inca civilization. The Incas built the estate around 1450, but abandoned it a century later at the time of the Spanish Conquest. Machu Picchu is vulnerable to threats. History

Temple of Amenhotep III Tuesday, February 21, 2012 The site of Malqata is built just outside the northern end of a gigantic man-made lake (or harbor) called the Birket Habu on old maps. The lake is outlined by huge mounds, with a double row along the desert side (for more on the Birket Habu, see the blog post for February 18, 2010 below). The best way to see this monumental piece of landscape architecture is on Google Earth, where it is very recognizable because of the straight line it makes along the edge of the desert. As you can see on the Google Earth photograph at the top of the page (and on the plan above), the double row of mounds peters out towards the upper right corner allowing the cultivated land to extend into the desert on two sides of the King’s Palace.