One Person–One Language and Bilingual Children 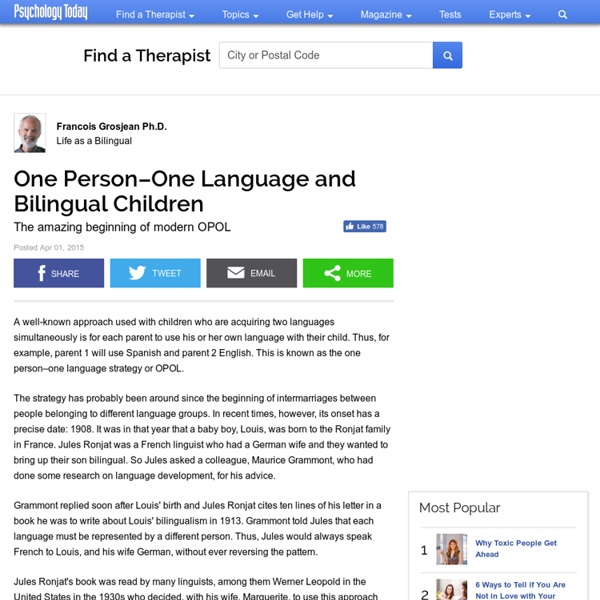 I Said I Want the Red Bowl! Responding to Toddlers' Irrational Behavior Pin It Amelia, told that she can’t have a fifth book before bedtime, shouts: “You are the meanest mommy! You are not invited to my birthday party!” Derek, when offered a choice between carrots and cheese, not ice cream, before dinner announces: “I don’t like the choices you are choicing me!” Teaching English to learners with Special Educational Needs (SENs) – Myths and realities ‘I know I have children with special educational needs in my class, I want to help them and we are supposed to promote inclusion, but I really am not sure how to do this’ Vera, primary teacher from Spain ‘Some of the children in my class are really badly behaved, they can’t sit still, don’t finish their work and are always calling out. I think they might have a learning difficulty, but I don’t know what to do’

The natives and the speakers Let me start with the good news. We are, all of us without exception, native speakers. This may come as a surprise to those of us who have had close encounters with the second/foreign language world, but is nonetheless true. It means that we are all competent users of language – more or less competent, of course, depending on all sorts of individual and social factors that make us clumsy or proficient in whatever we do. Now the bad news.

The Brain-Changing Power of Conversation The Science Researchers used highly faithful audio recorders — a system called Language Environment Analysis (known as LENA) — to capture every word spoken or heard by 36 4–6 year olds from various socioeconomic backgrounds over two full days. The recordings were analyzed to measure the number of words spoken by each child, the number of words spoken to each child, and the number of conversational turns — back-and-forth exchanges initiated by either adult or child. Comparing those measurements with brain scans of the individual children, the analysis found that differences in the number of conversational turns accounted for differences in brain physiology, as well as for differences in language skills including vocabulary, grammar, and verbal reasoning.

Deconstructing Role Play – Provide the Resources, Step Back and Watch Children’s Learning Flourish Hospital, vet’s surgery, post office, travel agent – themed role play areas are often seen as a must for an early years setting. They are often meticulously prepared to be aesthetically pleasing, covered in laminated words and pictures with the aim of enticing children in. But this is where I encountered a problem: in these areas, children are expected to come together to play out adult scenarios that are consistent with these themes. Yet how many children have visited a travel agent to book a holiday recently, or operated on a pet dog in a vet’s surgery? How can parents and teachers best educate young children? What principles can both teachers and parents bring to the education of very young children? Gillian Craig, who was part of the Learning Time with Shaun and Timmy writing team, explains. As teachers and parents, we follow certain principles in our roles. Often though, these principles overlap and all we need to do is recognise and reinforce these areas. Ask (the right) questions When my daughter came out of her class one day shortly after her course started, I asked her, 'What did you do in class today?'.

Scientists Say Child's Play Helps Build A Better Brain : NPR Ed Deion Jefferson, 10, and Samuel Jefferson, 7, take turns climbing and jumping off a stack of old tires at the Berkeley Adventure Playground in California. The playground is a half-acre park with a junkyard feel where kids are encouraged to "play wild." David Gilkey/NPR hide caption toggle caption MIT Brain Study: Back-And-Forth Talk Key To Developing Kids' Verbal Skills Sign up for the CommonHealth newsletter to receive a weekly digest of WBUR’s best health, medicine and science coverage. New MIT research finds that for children's brain development, parents don't just need to talk to their kids — it's important to talk with them, in back-and-forth exchanges. Story continues below Most Viewed Stories