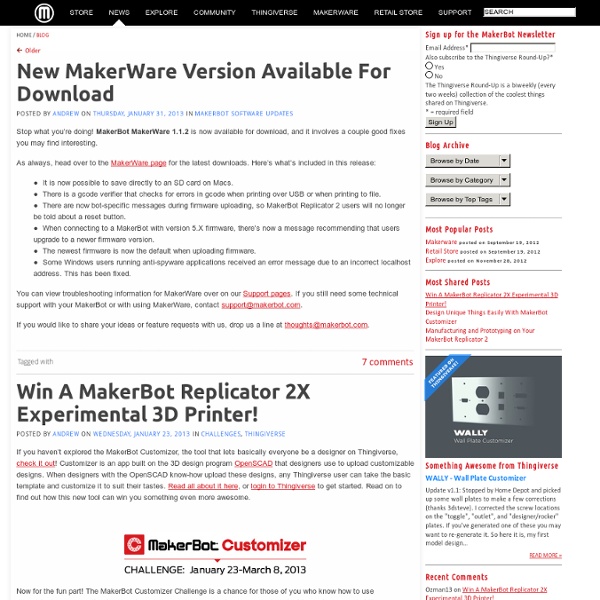 Steps to Success Every now and then we’re reminded 3D printing is not science fiction, but a real technology used every day to make amazing things in homes, studios, schools, and businesses. At MakerBot we’re proud to be leading this Next Industrial Revolution with the MakerBot 3D Ecosystem, which makes desktop 3D printing and 3D scanning affordable and reliable for everyone, and includes a variety of products and services to help unleash your creativity. One of the newest members of our family is MakerBot Desktop, a complete, free 3D printing solution for discovering, managing, and sharing your 3D prints. 1. – Did you design your own model? – Want to browse through free designs? – Looking for high-quality, original prints? 2. You may also want to change some settings before printing. You can also choose your resolution: low, standard, or high. 3. – If you’re printing via USB stick, MakerBot Desktop will slice your file when you click Print. Now you’re all set to start printing.

Printrbot: The Perfect Beginner 3D Printer Can Expand Itself There are a host of 3D printers out there, but none are as simple and inexpensive as the Printrbot created by Brook Drumm. It’s still in Kickstarter mode, but as of this writing,( the Printbot has already met the pledge goal. So we’re going to be seeing some of these in the future, and I know I already want to get my hands on one. There are a lot of different Printrbot kits you can order right now by pledging funds to the project: Some kits have only the basic parts, and no electronics, while some are even sparser, not even containing motors and hardware. I suppose if you got a bunch of hardware lying around and want to buy the electronics yourself that’s a good way to go, but Brook will offer a kit for $499 that includes everything you'll need to build it. For somebody looking to get going right away that’s probably your best bet, and it’s a lot cheaper than a MakerBot--and you can be printing in under 2 hours. What’s the first thing you would print with one of these? [Kickstarter]

DIY High Resolution 3D Printer Even though 3D printers have become mainstream and costs have declined, most cannot create a fine level of detail when printing. For rapid prototyping, you can fabricate one yourself such as the High Resolution DLP 3D Printer. Homemade yet still turns out impressive results. The 3D printer uses a Digital Light Processing chip with a high resolution video projector to render each layer of the image on a resin which is cured by a UV laser layer by layer. Popular 3D Printer Projects: Blog: A new approach to printing metals There have been numerous attempts to print conductors. Fab@home, Ed Sells and myself have all tried it previously with very limited success. Whilst I've been able to print a basic circuit from solder, we were unable to achieve the resolution to produce anything but the most simplistic circuit board. I did actually make filament using this composite material using the old technique of casting into silicone tubing. Fortunately non-eutectic alloys also offer this ability to have solid elements suspended within a molten liquid. After some thought I proposed that our ideal material would have a similar melting point to PLA/ABS such that when deposited on top a minimal amount of damage. I decided to go for an alloy of tin, indium and bismuth few a few reasons. Above is the phase diagram for the system. The above was printed directly onto glass. After the initial success, this is where the onslaught of problems began. At this point we were a bit stumped. Labels: Printing Conductors

Thinglab - Independent UK Experts in 3D Printing and 3D Scanning - Full Solutions and Services in the United Kingdom Now You Can Do 3-D Printing Out of Sawdust From our friends at Fast Company , "bridging the fuzzy border between design and business." Used to be, if you wanted to make a detailed shape out of wood -- for a nice little fruit bowl, say -- you had to carve it by hand using a big chunk of timber, which is a.) time-consuming b.) expensive and c.) bad for the environment. (Think of all the scraps you end up with.) Now, you can just pull it out of a printer. The Dutch rapid-prototyping outfit Freedom of Creation (FOC) announced today that it has added wood -- one of the planet's most abundant natural resources -- to its suite of 3-D printing materials. Mind you, this isn't wood resembling anything you might buy at Home Depot. The big selling point here is that it's gentler on Mother Nature than the materials rapid prototyping typically resorts to, like plastics and metals. There are limitations. By Suzanne LaBarre at Fast Company

Freedom Of Creation | Pioneers in 3D Printed Designs Freedom Of Creation develops Tree-D Printing in Wood We have been preaching about the sustainability of 3D printing for a long time, but it is still quite difficult for most to understand the bigger picture. As all should know by now our transportation of the future will be limited to just emails and our stock is reduced to just files stored on our hard drives. However, the base materials still need to be created from scratch and they still need to be shipped all over the world. We have been very motivated to find alternatives for this that truly democratize creation. This means there is a 3D printer available to everyone, that anybody can use and that uses common materials that are found anywhere on the planet. We have been busy with our development now for over 2 years and so far we have been able to 3D print in a range of wood sorts from around the world. Here you can see a comparison between a gray Laser Sintered Macedonia tray to a teak tray. The digital 3D computer file we use to manufacture the Macedonia Fruit Tray .

Latest 3D Printing News From Cubify Guest Posting by Matthew Straub, Director of Communications at IDEAco As far as we know, on Tuesday we launched the first Common Core State Standards-aligned curriculum that fully integrates 3D printing technologies, design thinking, and empathy for kids. Specifically, the City X Project toolkit is geared toward kids 8-12, and is the result of testing and experimenting with the workshop with over 500 kids in four countries. Our design thinking toolkit is meant for everyone, and we couldn’t be happier that it has already been downloaded by people in at least 13 countries. The CIty X Project is accommodates approximately six hours of lessons, beginning with a fictional story about humans building the first settlement on a new planet, called City X. We began our journey toward releasing this toolkit over a year ago thanks to our Presenting Sponsor, 3D Systems.