Who Controls Our Schools? How Billionaire-Sponsored Privatization Is Destroying Democracy and Enriching the Charter School Industry 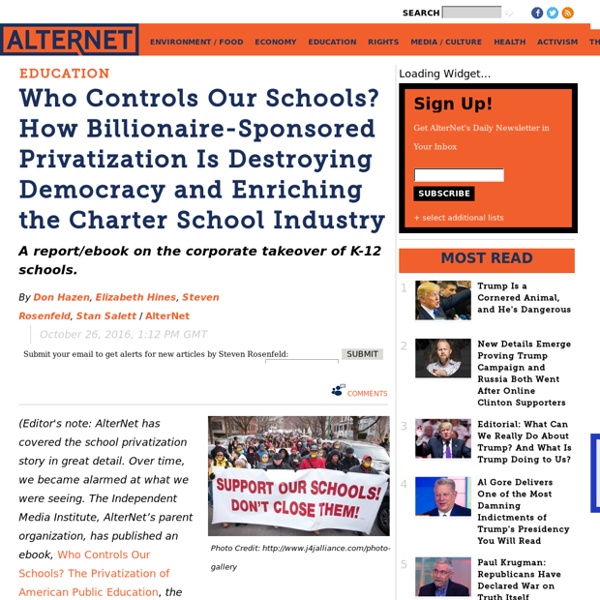 Photo Credit: (Editor's note: AlterNet has covered the school privatization story in great detail. Over time, we became alarmed at what we were seeing. The Independent Media Institute, AlterNet’s parent organization, has published an ebook, Who Controls Our Schools? The Privatization of American Public Education, the full text of which you can access for free online with this link. What follows is a summary of its findings and recommendations.) The Problem America’s public schools, which over the 20th century came to embrace the promise of equal opportunity for all children, are at a historic crossroad. The growth of charter schools nationwide (whose numbers have increased exponentially since 2000) would not have occurred without a handful of heirs to the world’s largest family fortunes and other billionaires directing their tax-exempt foundations using their wealth to remake public schools in a corporate image. The Findings This narrative includes but is not limited to:

War on the wildest places: US bill may open pristine lands to development The Big Snowy Mountains wilderness study area in Montana represents 91,000 acres of the wildest land left in America. Viewed from a limestone bluff high in a timbered gulch, no houses are visible. No transmission lines or roads interrupting the expanse of green. How Segregation Shapes Fatal Police Violence : Code Switch The family of Dontre Hamilton marked a spot in red paint to memorialize where he was shot by a Milwaukee police officer. Carrie Antlfinger/AP hide caption toggle caption Ghana's Illegal Galamsey Gold Mining Affecting Cocoa Farmers, Chocolate Supply Obuasi, GhanaKwaku Asare grabbed his machete and trekked through the bush to his cocoa farm—through winding pathways and hills, past ominous pits of muddy water, and underneath the low-hanging canopy of dried cocoa leaves. But the trees were bare. A few rotting cocoa pods littered the ground, while other stunted pods refused to ripen on the branches. “When the Chinese came, they told me that my plants were not yielding anymore because there was so much gold under the soil,” Asare said. After a few years of low production, he sold his 14 acres to a group of small-scale gold miners, also called galamsey miners, with a Chinese sponsor.

World’s great forests could lose half of all wildlife as planet warms – report The world’s greatest forests could lose more than half of their plant species by the end of the century unless nations ramp up efforts to tackle climate change, according to a new report on the impacts of global warming on biodiversity hotspots. Mammals, amphibians, reptiles and birds are also likely to disappear on a catastrophic scale in the Amazon and other naturally rich ecosysterms in Africa, Asia, North America and Australia if temperatures rise by more than 1.5C, concludes the study by WWF, the University of East Anglia and the James Cook University. The research in the journal Climate Change examined the impact of three different levels of warming – 2C (the upper target in the 2015 Paris agreement), 3.2C (the likely rise given existing national commitments) and 4.5C (the forecast outcome if emissions trends remain unchanged) on nearly 80,000 plant and animal species in 35 of the world’s most biodiverse regions.

The World’s Water Crisis Explained on World Water Day “Day Zero,” when at least a million homes in the city of Cape Town, South Africa, will no longer have any running water, was originally scheduled for April. It was recently moved to July. The three-year long drought hasn’t ended, but severe water rationing—limiting people to a mere 13 gallons (50 litres) per person per day—has made a difference.

A Black Family Stood Up to this Racist White Couple a Restaurant A black teenager used Facebook Live to reveal just how ugly racism is at a Chester's in San Antonio, Texas. The 15-year-old went with her family to the restaurant after attending church services, and according to her, when she got her beverage she heard a white family cursing at her for an unknown reason. With her camera in hand, and another relative by her side, she walked up to the white family and said, "So, Facebook, this is what racist people looks like." Without skipping a beat, the white family immediately started using racial slurs and obscenities at the teen and her family.

Two minutes to midnight: did the US miss its chance to stop North Korea’s nuclear programme? Pyongyang International is one of the world’s quieter airports. The country’s chronic isolation means that there are not many places to fly, and few foreigners keen on visiting. At least until a new terminal was built in 2012, many of the flights on the departure boards were just for show, giving the appearance of connection with the outside world. They never actually took off. Against this melancholy backdrop, one day in late May 1999, something quite extraordinary happened. An official plane bearing the blue-and-white livery of the US government and emblazoned with the stars and stripes landed and taxied along the runway.

Terrawatch: the rivers taking plastic to the oceans Every minute one rubbish lorry’s-worth of plastic is dumped into the sea. If we continue at this rate, some estimate that our oceans will contain more plastic than fish by 2050. So where does all the plastic come from? New research reveals that just 10 river systems transport more than 90% of the global input of plastic into to the world’s oceans. Abusive relationships: Why it's so hard for women to 'just leave' “And so I stayed.” In a widely read blog post, Jennifer Willoughby wrote this phrase after each of the many reasons she gave for enduring what she described as her abusive marriage to former White House aide Rob Porter. Willoughby’s reasons are consistent with those that hundreds of abused women report to researchers.

Climate change: Our plans are in pieces as killer heat shreds records Climate change is here and is affecting the entire globe -- not just the polar bears or tiny islands vulnerable to rising sea levels -- scientists say. It is on the doorsteps of everyday Americans, Europeans and Asians, and the best evidence shows it will get much worse. Remarkably, scientists can now work out in just a matter of days how much human-induced climate change has had to do with a particular weather event, using a combination of observation, historical data and current information from weather stations. "The European heat wave was at least twice as likely to happen because of human intervention. Based on findings in Ireland it was double -- and we know that with very high confidence -- and based on data from all other weather stations it was more than double," said Karsten Haustein from the World Weather Attribution Project, part of Oxford University's Environmental Change Institute.

A Warm Water Mass Called “The Blob” Is Killing Alaska’s Cod THE DESTRUCTIVE BLOB. In 2013, an unstoppable entity began terrorizing the Pacific. At times it spanned the entire stretch of ocean from Alaska to South America. 'My classroom has asbestos and bats': a message for Betsy DeVos Secretary DeVos, this is what American teachers want you to know about their struggles. In September, the Guardian invited a team of public school teachers to serve as guest editors of our site and share their stories of teaching in America. As part of the project, our teacher-editors published a manifesto entitled “We shouldn’t be on food stamps: Teachers on how to fix America’s education system”. We also invited teachers in our audience to contribute their own stories to the document, and promised to deliver their messages to Secretary of Education Betsy DeVos. We received responses from hundreds of teachers across the country, and today, we are publishing a representative sample of those messages.

60,000 tons of dangerous radioactive waste sits on Great Lakes shores More than 60,000 tons of highly radioactive spent nuclear fuel is stored on the shores of four of the five Great Lakes — in some cases, mere yards from the waterline — in still-growing stockpiles. “It’s actually the most dangerous waste produced by any industry in the history of the Earth,” said Gordon Edwards, president of the nonprofit Canadian Coalition for Nuclear Responsibility. The spent nuclear fuel is partly from 15 current or former U.S. nuclear power plants, including four in Michigan, that have generated it over the past 50 years or more. But most of the volume stored along the Great Lakes, more than 50,000 tons, comes from Canadian nuclear facilities, where nuclear power is far more prevalent.

Suicide more prevalent than homicide in US, but most Americans don't know it In the United States, suicide is twice as common as homicide -- and more often involves firearms -- but public perception is just the opposite. News reports, movies and TV shows may contribute to the perception of a high risk of firearm homicide, authors of a new study say, leaving a substantial gap between ideas and reality and potentially leading to further danger. Now, first-of-its kind research, led by the University of Washington, Northeastern University and Harvard University, delves into public perceptions of gun violence and the leading causes of death in the U.S. The study, published Tuesday in the Annals of Internal Medicine, seeks to facilitate national public discussions about firearm ownership and storage. "This research indicates that in the scope of violent death, the majority of U.S. adults don't know how people are dying," said Erin Morgan, lead author and doctoral student in the Department of Epidemiology at the UW School of Public Health.