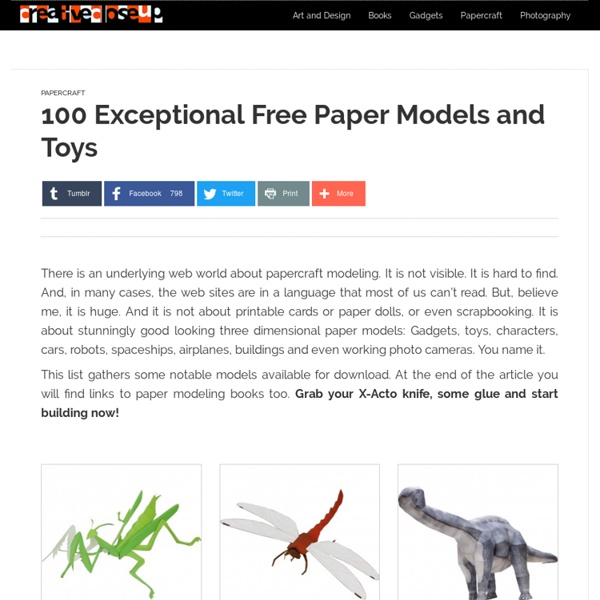 Haunted Paper Toys Welcome to the toy shop! Here you'll find a variety of rather unusual paper toys, all free for you to print out and enjoy. The toys include a hearse playset, coffin gift boxes (with occupants), a little cemetery, a few dark gloomy haunted houses, several unusual board games, some horrifying monsters, and quite a few other dark delights. So pick out some toys, print out the pattern pages, and with a few common supplies like scissors and glue you're ready to create all these strange little curiosities. I hope you'll enjoy them all. I recommend printing these toys on HEAVY CARD STOCK.

Modern Paper Crafts Modern Paper Crafts presents more than 20 projects that rely on classic paper craft techniques, but are suited to 21st-century style and aesthetics.The suite of contemporary projects ranges from gift wrap, holiday ornaments, and note cards to home decor items like a frames, boxes, bowls, silhouettes, wall art, mobiles, and even a folding screen. Projects are divided into five chapters: folding, cutting, scoring and sculpting, pleating, and recycling. Each chapter begins with an overview and step-by-step photo tutorials of basic techniques, and each project includes step-by-step instructions and illustrations. A variety of papers are used for the projects, from standard cardstock and scrapbooking paper to art papers and recycled corrugated cardboard.

Paper diamonds for decoration We made these huge diamonds, while we were preparing the paper fir trees. You need two sheets of A4 printer paper. The form is very flexible and it is suitable both for a separate decoration and the finishing element of hanging Christmas snowflakes, for example. They make a beautiful garland when strung up together. Spazio Papercraft - SHADO UFO Interceptor gratuita Modello Paper Scarica This UFO paper model is the SHADO UFO Interceptor, based on the UFO TV series, the papercraft was designed by Gary Pilsworth. UFO is a 1970 British television science fiction series about an alien invasion of Earth, created by Gerry Anderson and Sylvia Anderson with Reg Hill, and produced by the Andersons and Lew Grade's Century 21 Productions for Grade's ITC Entertainment company. To defend against the aliens, a secret organisation called SHADO is established. Operating behind the cover of the Harlington-Straker Studios movie studio in England, SHADO is headed by Commander Edward Straker, a former United States Air Force Colonel and astronaut who poses as the studio's chief executive.

rolled paper flowers Welcome to flower week – five days of simple and delightful flower projects. I could probably do three weeks of flowers because there are so many different ways to create them, but I’ve limited it to five of my current favorites. Before we get started, let me make a few disclaimers: 1. I find inspiration for projects all over the place {online, in shops, in magazines}, then figure out how to re-create them on my own. Each of these projects are my adaptation of something I’ve seen elsewhere. Paper craft Also known as the Festival of Lights, Hanukkah is an eight-day Jewish holiday commemorating the rededication of the Holy Temple (the Second Temple) in Jerusalem at the time of the Maccabean Revolt of the 2nd century BCE. This year, Hanukkah begins in the evening of Saturday, December 8, 2012, and ends in the evening of Sunday, December 16, 2012. But even though Hanukkah is fast-approaching, it’s not the date that’s giving me a sense of urgency about posting this paper craft project: Rather, I’m just tired of people correcting my pronunciation when I say “Droidel.” Click here to keep reading about the difference between a droidel and a dreidel Now that the Dr. Seuss book, “The Lorax” has been adapted for the big screen , merchandising is bound to follow: From stuffed animals and apps to Lorax-themed meals at IHOP, lots of companies are hoping to cash on this fable about the environment.

untitled And the Oscar goes to…YOU! The 88th Annual Academy Awards show airs February 28th and it is always full of glitz and glam. Other than watching the red carpet trends, my favorite part of the night has to be getting together with friends for a fun watch party. So this year I thought I would share my tradition with you all! Oscar Party decor is so much fun to play around with, and any worthwhile Oscar event would not be complete without its own DIY Oscar statue. To plan your own Oscar Watch Party, start by creating your guest list and sending out your invitations. UFO - SHADO Skydiver gratuita di modello di carta - Papermodels If you want to discuss contents of this page - this is the easiest way to do it. Click here to edit contents of this page. Click here to toggle editing of individual sections of the page (if possible).

Just Glue and Paper: March 2010 Paper Model: Italian Job Mini Coopers and Mr. Bean Mini Cooper Material: Linen paper Date Finished: August 25, 2009 Credits: Vancouver Mini Club The red, blue and white mini coopers are the ones used by the protagonists of the 1969 movie "Italian Job" starred by Michael Caine. Mini Canvases Family Shadow Box [ Close Privacy Policy ] Privacy Policy / Your California Privacy Rights Revised and posted as of January 11, 2016 Prime Publishing, LLC ("Company," "we" or "us") reserves the right to revise this Privacy Policy at any time simply by posting such revision, so we encourage you to review it periodically. In order to track any changes to this Privacy Policy, we will include a historical reference at the top of this document. This Privacy Policy will tell you, among other things:

Motor Sports World: Racing - Spettacolo The underlying ideal for Yamaha Motor's motorcycle development is achieving rider-machine unity in which the machine responds just the way the rider expects it to. Is it possible to recreate in papercraft the world of racing in its entirety instead of just a machine, where the ultimate unity between the rider and the machine is achieved? We offer you a model kit that embodies the idea of Mr. Mukouyama, a papercraft designer who has been in charge of producing papercraft models offered at the Yamaha Motor website. The general world of racing is created in papercraft on an unprecedented scale as our own "Motorsports World," with the YZR-M1 (2013 model) at the center, representing the powerful excitement of racing and the ambience of a racing circuit as its stage.