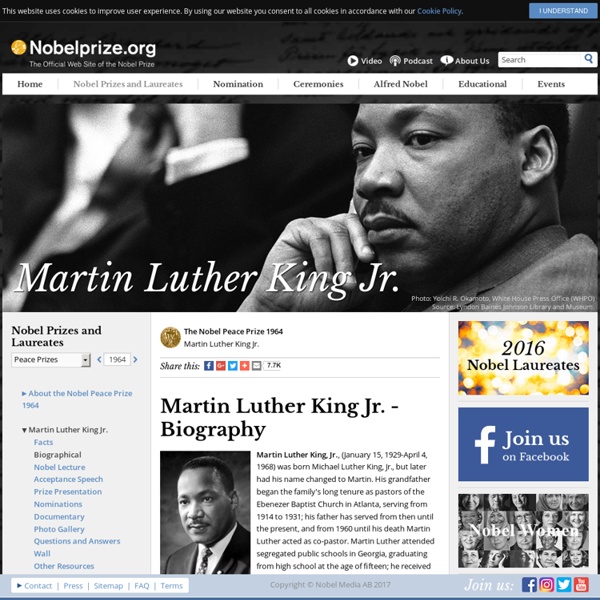 Martin Luther King, Jr., (January 15, 1929-April 4, 1968) was born Michael Luther King, Jr., but later had his name changed to Martin. His grandfather began the family's long tenure as pastors of the Ebenezer Baptist Church in Atlanta, serving from 1914 to 1931; his father has served from then until the present, and from 1960 until his death Martin Luther acted as co-pastor. Martin Luther attended segregated public schools in Georgia, graduating from high school at the age of fifteen; he received the B. A. degree in 1948 from Morehouse College, a distinguished Negro institution of Atlanta from which both his father and grandfather had graduated. After three years of theological study at Crozer Theological Seminary in Pennsylvania where he was elected president of a predominantly white senior class, he was awarded the B.D. in 1951. In 1954, Martin Luther King became pastor of the Dexter Avenue Baptist Church in Montgomery, Alabama. Selected Bibliography "Martin Luther King, Jr Related:  Civil Rights Movement

Civil Rights Movement 1955-1965: Freedom Rides [Previous Topic] [Next Topic] [Up] [Table of Contents] [Citation Guide] [Feedback] [Search] [Home] [Help!] "At our first stop in Virginia . . . I [was] confronted with what the Southern white has called `separate but equal.' A modern rest station with gleaming counters and picture windows was labelled `White,' and a small wooden shack beside it was tagged `Colored.'"-- Freedom Rider William Mahoney[26] In 1947, the Congress of Racial Equality (CORE) planned a "Journey of Reconciliation," designed to test the Supreme Court's 1946 decision in the Irene Morgan case, which declared segregated seating of interstate passengers unconstitutional. Nearly a decade and a half later, John F. The Freedom Ride left Washington DC on May 4, 1961. On Mother's Day, May 14, the Freedom Riders split up into two groups to travel through Alabama. Despite the violence, the Freedom Riders were determined to continue. After the violence at the church, Robert Kennedy asked for a cooling-off period.

Confucius Confucius (551–479 BC)[1] was a Chinese teacher, editor, politician, and philosopher of the Spring and Autumn period of Chinese history. Confucius is traditionally credited with having authored or edited many of the Chinese classic texts including all of the Five Classics, but modern scholars are cautious of attributing specific assertions to Confucius himself. Aphorisms concerning his teachings were compiled in the Analects, but only many years after his death. Confucius's principles had a basis in common Chinese tradition and belief. Names Within the Analects, he is often referred to simply as "the Master" (子 Zǐ). Background Biography Early life Lu can be seen in China's northeast Confucius was born into the class of shi (士), between the aristocracy and the common people. Political career Exile Return home According to the Zuo Zhuan, Confucius returned home when he was 68. Philosophy In the Analects, Confucius presents himself as a "transmitter who invented nothing". Ethics 廄焚。 己所不欲，勿施於人。

Mahatma Gandhi Biography Early Life Indian nationalist leader Mohandas Karamchand Gandhi, more commonly known as Mahatma Gandhi, was born on October 2, 1869, in Porbandar, Kathiawar, India, which was then part of the British Empire. His father, Karamchand Gandhi, served as a chief minister in Porbandar and other states in western India. His mother, Putlibai, was a deeply religious woman who fasted regularly. Gandhi grew up worshiping the Hindu god Vishnu and following Jainism, a morally rigorous ancient Indian religion that espoused non-violence, fasting, meditation and vegetarianism. Young Gandhi was a shy, unremarkable student who was so timid that he slept with the lights on even as a teenager. In 1885, Gandhi endured the passing of his father and shortly after that the death of his young baby. Upon returning to India in 1891, Gandhi learned that his mother had died just weeks earlier. Spiritual and Political Leader Gandhi formed the Natal Indian Congress in 1894 to fight discrimination. The Salt March

The Supreme Court . Expanding Civil Rights . Landmark Cases . Brown v. Board of Education (1954) Mother (Nettie Hunt) and daughter (Nickie) sit on steps of the Supreme Court building on May 18, 1954, the day following the Court's historic decision in Brown v. Board of Education. Nettie is holding a newspaper with the headline "High Court Bans Segregation in Public Schools." Reproduction courtesy of Corbis Images Brown v. In 1954, large portions of the United States had racially segregated schools, made legal by Plessy v. One of these class actions, Brown v. Thanks to the astute leadership of Chief Justice Earl Warren, the Court spoke in a unanimous decision written by Warren himself. Were the black and white schools "substantially" equal to each other, as the lower courts had found? Opposition to Brown I and II reached an apex in Cooper v.

About Buddha About Dr. Marshall Rosenberg — Visionary Leader Marshall B. Rosenberg, Ph.D. is the founder and director of educational services for the Center for Nonviolent Communication, an international peacemaking organization. He is the author of Speak Peace in a World of Conflict, the bestselling Nonviolent Communication: A Language of Life, as well as Life-Enriching Education and several NVC booklets. Dr. Growing up in a turbulent Detroit neighborhood, Dr. Dr. A sought-after presenter, Rosenberg’s teaching style is both intimate and powerful. With guitar and puppets in hand, a history of traveling to some of the most violent corners of the world, and a spiritual energy that fills a room, Rosenberg is a revolutionary leader we should all watch.

A Brief History of Jim Crow “I can ride in first-class cars on the railroads and in the streets,” wrote journalist T. McCants Stewart. “I can stop in and drink a glass of soda and be more politely waited upon than in some parts of New England.” Perhaps Stewart’s comments don’t seem newsworthy. Consider that he was reporting from South Carolina in 1885 and he was black. Stewart had decided to tour the South because he feared for freedmen’s liberties. After a few weeks on the road, Stewart decided they would. Stewart was wrong. “Jim Crow” was a derisive slang term for a black man. In 1890, in spite of its 16 black members, the Louisiana General Assembly passed a law to prevent black and white people from riding together on railroads. Two years later, the court seemed to seal the fate of black Americans when it upheld a Mississippi law designed to deny black men the vote. Jim Crow laws touched every part of life. In Richmond, one could not live on a street unless most of the residents were people one could marry.

Gandhi - Wikipedia, Mohandas Karamchand Gandhi pronunciation (pronounced: [ˈmoːɦənd̪aːs ˈkərəmtʃənd̪ ˈɡaːnd̪ʱi] ; 2 October 1869 [ 1 ] – 30 January 1948), commonly known as Mahatma Gandhi , was the preeminent leader of Indian nationalism in British-ruled India . Employing non-violent civil disobedience , Gandhi led India to independence and inspired movements for non-violence, civil rights and freedom across the world. [ 2 ] [ 3 ] The son of a senior government official, Gandhi was born and raised in a Hindu community in coastal Gujarat , and trained in law in London. Gandhi led Indians in protesting the national salt tax with the 400 km (250 mi) Dandi Salt March in 1930, and later in demanding the British to immediately Quit India in 1942, during World War II . In his last year, unhappy at the partition of India , Gandhi worked to stop the carnage between Muslims, Hindus and Sikhs that raged in the border area between India and Pakistan. Early life and background English barrister Gandhi and the Africans

The Rise and Fall of Jim Crow. Resources The History of Jim Crow www.jimcrowhistory.org/home.htm This site for educators explores the segregation of African Americans from the 1870s through the 1950s. African American World www.pbs.org/wnet/aaworld/ Peruse this detailed, comprehensive Web site on African Americans to learn more about their historic struggles from the civil rights movement to the Jim Crow era. Behind The Veil: Documenting African American Life in the Jim Crow Era Housed at the Center for Documentary Studies at Duke University, this research effort attempts to correct historical inaccuracies of African American experiences during the period of legal segregation through the voices of those who lived it. Virtual Jim Crow Museum of Racist Memorabilia www.ferris.edu/news/jimcrow/index.htm Visit the museum that houses a 4,000-piece collection of racist artifacts that Dr. African American Holocaust www.maafa.org/ See a compilation of lynching photographs by Milford F. W.E.B. A.

Jesus Jesus (/ˈdʒiːzəs/; Greek: Ἰησοῦς Iesous; 7–2 BC to 30–33 AD), also referred to as Jesus of Nazareth, is the central figure of Christianity,[12] whom the teachings of most Christian denominations hold to be the Son of God. Christianity regards Jesus as the awaited Messiah (or "Christ") of the Old Testament and refers to him as Jesus Christ,[e] a name that is also used in non-Christian contexts. Etymology of names Since early Christianity, Christians have commonly referred to Jesus as "Jesus Christ". The word Christ is derived from the Greek Χριστός (Christos),[28][37] which is a translation of the Hebrew מָשִׁיחַ (Meshiakh), meaning the "anointed" and usually transliterated into English as "Messiah".[38] Christians designate Jesus as Christ because they believe he is the awaited Messiah prophesied in the Hebrew Bible (Old Testament). Chronology A number of approaches have been used to estimate the year of the crucifixion of Jesus. Life and teachings in the New Testament

Civil Rights Movement 1955-1965: The Montgomery Bus Boycott [Previous Topic] [Next Topic] [Up] [Table of Contents] [Citation Guide] [Feedback] [Search] [Home] [Help!] "My feets is weary, but my soul is rested."-- Mother Pollard[1] The Montgomery Bus Boycott officially started on December 1, 1955. The simple version of the story leaves out some very important people, such as Jo Ann Robinson, of whom Martin Luther King, Jr., would later write, "Apparently indefatigable, she, perhaps more than any other person, was active on every level of the protest." [3] She was an educated woman, a professor at the all-black Alabama State College, and a member of the Women's Political Council in Montgomery. Rosa Parks is probably the most romanticized personage in the Montgomery cast of characters. On Thursday, December 1, 1955, Rosa Parks boarded a city bus and sat with three other blacks in the fifth row, the first row that blacks could occupy. When E.D. That night, Jo Ann Robinson put plans for a one-day boycott into action. Next, whites turned to the law.

Martin Luther King has claimed the rights of black people by making a lot of speeches and actions. Just like him, the aboriginals could have had a racial democratic leader who could have helped them to get out of their situation where they were in minority with no rights. by gagnonseguinzilio Oct 31