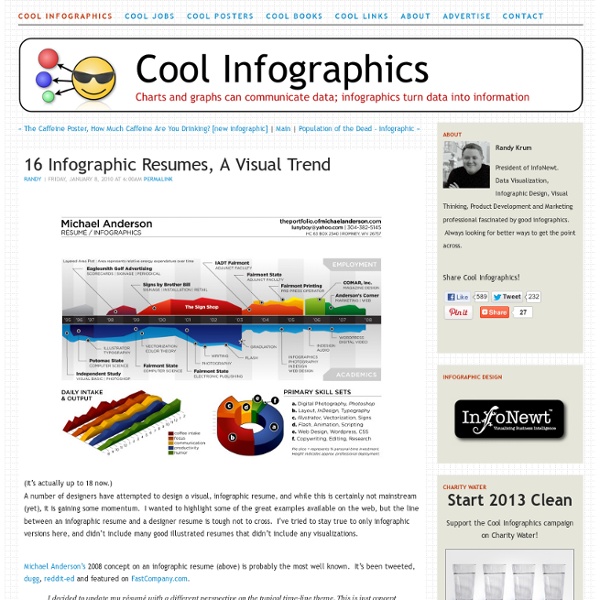 (It’s actually up to 18 now.) A number of designers have attempted to design a visual, infographic resume, and while this is certainly not mainstream (yet), it is gaining some momentum. I wanted to highlight some of the great examples available on the web, but the line between an infographic resume and a designer resume is tough not to cross. I’ve tried to stay true to only infographic versions here, and didn’t include many good illustrated resumes that didn’t include any visualizations. Michael Anderson’s 2008 concept on an infographic resume (above) is probably the most well known. It’s been tweeted, dugg, reddit-ed and featured on FastCompany.com. I decided to update my résumé with a different perspective on the typical time-line theme. I do agree it’s more of an overview and less of a project-experience-oriented resume, but I’ve been thinking a lot about (and looking at) resumes lately, and I feel like what you really need to do is grasp someone’s attention first. Randy

animal font « Daisy Balloon Diary Daisy Balloon | Announcement /April 24 , 2011 we are planning to have some projects to support people from the recovery of this disaster. To begin with that we will donate our entire sales of the i phone APP “Animal Font” which is the picture above for half a year. A Timeline of Timelines This is an expanded version of a timeline tha­t appeared in Cabinet's "Histories of the Future" issue. Daniel Rosenberg's introduction to the timeline can be found here. Although we have not been able to preserve the horizontal design, we have added additio­nal entries for this web version. If there are omissions or errors, we'd love to hear from you. Please email Cabinet at this e-mail address. Jewish scholar José ben Halafta calculates the exact length of time between Creation and the destruction of the Second Temple.

How To Create Outstanding Modern Infographics In this tutorial you will learn that data doesn't have to be boring, it can be beautiful! Learn how to use various graph tools, illustration techniques and typography to make an accurate and inspiring infographic in Adobe Illustrator. Start by using the Rectangle Tool (M) to draw a shape. Give it a subtle radial gradient too. The entire design is based on a grid of four columns.

The Scale of the Universe, Five Ways by Maria Popova What coffee beans, dinosaurs and lakeside picnics have to do with Isaac Asimov and formalized figments. Since yesterday was 10.10.10, we’ve decided to celebrate this cosmic alignment of numerical symmetry by illuminating the measurements of magnitude. Today, we are taking five different looks at one of the most difficult concepts for the human brain to quantify and understand: The size and scale of the universe. What better way to celebrate 10.10.10 than with Charles and Ray Eames’ iconic Powers of Ten film, an adventure in magnitudes circa 1977?

It’s smarter to travel in group, new campaign for De Lijn Public bus company De Lijn has launched a new campaign showing it’s smarter to take the bus or tram. Kick off is a commercial showing a group of ants beating an aardvark in a clever way. Pay-off : It’s smarter to travel in group, take the bus. The 3D-production was done by CC (Creative Conspiracy). information visualized Click here to see original size on flickr Authors: Creative Direction: Donato Ricci, Concept development: Gaia Scagnetti, Visualizer: Mario Porpora, Artist: Michele Graffieti, Designer: Luca Masud Why Self-Publishers Should Consider Using Lightning Source Self-publishing services are on the rise — a dramatic one. And because of this, technologies are evolving weekly, and advertising is flowing. If you’re using a free subsidy press and e-book distributor to self-publish and sell your book, one service to get familiar with is Lightning Source. Lightning Source has free book cover templates, spine-width calculators, and bar codes, and visibly higher-quality printing. Because it’s owned by Ingram, your book will automatically be visible to bookstores, too. Here are a bunch of reasons LSI should be in the mix of tools you use to publish your book.

m jealous of javier piñón i’m jealous of javier piñón Oh boy, I think I have a new crush… yep, I do. Brooklyn based artist Javier Piñón {and his cowboys} had me at howdy. These boys are from three different series: Chairs, Chandeliers, and Floods… and I love them all very, very much. {I discovered Javier’s work through Fine Line Magazine. I wrote about Issue One last November, and as of this Friday (02.25) Issue Two will be out/ready to order… and Javier’s cowboys are in it ♥ Yee-haw!} Malcolm Gladwell: When technology fails Malcolm Gladwell said the story of the Norden bombsight is a cautionary tale about the promise of technology. Malcolm Gladwell: U.S. invested heavily in WW II-era bombsight that often missed its markAt TED Global conference, he said today's drone attacks may be counterproductiveOther speakers asked: Why can't we feed world's poorest?Alain de Botton: What can atheists learn from religion? Edinburgh, Scotland (CNN) -- By the end of World War II, the United States military had spent $1.5 billion on the Norden bombsight, a device that promised to be so accurate it was said a plane could drop a bomb in a pickle barrel from 20,000 feet, according to author Malcolm Gladwell. Speaking Friday on the last day of the TED Global conference, Gladwell said the device, designed by engineer Carl Norden, indeed could allow bombers to hit their targets -- but only under perfect conditions, such as a cloudless sky.

45 Incredible Futuristic Scifi 3D City Illustrations Futuristic cities have always fascinated me, as a fan of SciFi TV shows, movies, and digital art, futuristic city designs always bring me inspiration. Everyone can find quite a lot of stunning illustrations on sites like deviantArt. Many artists have become so skilled at Photoshop and 3D software that they create almost photographic illustrations of whole cities with incredible detail and precision. I have been inspired by these illustrations and it makes me work harder at everything I do; I hope you will feel the same. If you find other amazing art, please send it to us, we will use them in our upcoming articles.