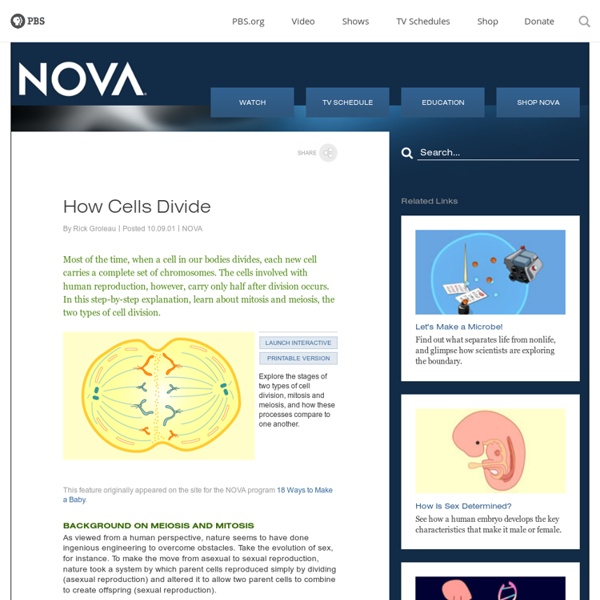 share By Rick Groleau Posted 10.09.01 NOVA Most of the time, when a cell in our bodies divides, each new cell carries a complete set of chromosomes. The cells involved with human reproduction, however, carry only half after division occurs. In this step-by-step explanation, learn about mitosis and meiosis, the two types of cell division. This feature originally appeared on the site for the NOVA program 18 Ways to Make a Baby. Background on Meiosis and Mitosis As viewed from a human perspective, nature seems to have done ingenious engineering to overcome obstacles. Asexual reproduction relies on a process called mitosis, in which the nucleus of a cell divides to create two new nuclei, each containing an identical copy of DNA. Meiosis, on the other hand, is the process by which certain sex cells are created. How exactly does meiosis halve and mix chromosomes?

Transport Videos Page Topics Brownian movement, Osmosis, Elodea Osmosis, Elodea Hypertonic, Elodea Hypotonic, Blood Isotonic, Blood Hypertonic, Blood Hypotonic, Osmosis in Red Onion, Paramecium Contractile Vacuole, Bulk Transport, Paramecium Endocytosis, Paramecium Exocytosis, Links to Transport Videos and Animations. Brownian Movement Brownian movement (motion) is the random movement of suspended particles in a gas or liquid that is caused by the molecular motion (collisions) of surrounding molecules (and particles) of the medium. In biological systems osmosis is defined as the diffusion of water (from an area of high concentration to an area of low concentration) across a selectively permeable membrane. Elodea - Osmosis Elodea is a common freshwater plant that is frequently used to decorate aquariums. Elodea - Hypertonic Solution A hypertonic solution is a solution that contains more (hyper) solutes than the cytoplasm of the cell. Elodea - Hypertonic Cells in a Hypotonic Solution Blood - Isotonic Solution

Exercising restores sensitivity of neurons that make one feel full There is now another good reason to exercise. Besides burning calories, exercise restores the sensitivity of neurons involved in the control of satiety (feeling full), which in turn contributes to reduced food intake and consequently weight loss. This is the conclusion of a study led by Brazilian researchers at the University of Campinas, and the findings will be published next week in the online, open access journal PLoS Biology. This disclosure may bring hope to over 40% of the population that suffers from weight problems and obesity around the world. The increase in obesity has become one of the most important clinical-epidemiological phenomena. The group led by José Barreto C. Physical activity has always been considered a cornerstone in the treatment of obesity, however, only now have the effects of exercise on the control of body weight been understood.

A Closer Look at Evolutionary Faces To recreate the faces of our early ancestors, some of whom have been extinct for millions of years, sculptor John Gurche dissected the heads of modern humans and apes, mapping patterns of soft tissue and bone. He used this information to fill out the features of the fossils. Each sculpture starts with the cast of a fossilized skull; Gurche then adds layers of clay muscle, fat and skin. Gurche, a “paleo-artist,” even molds the hominids’ eyes out of acrylic plastic, eschewing pre-fabricated versions. The sculpture above is of Lucy’s species, Australopithecus afarensis, which walked the earth roughly three million years ago.

Misfolded neural proteins linked to autism disorders An international team of scientists, led by researchers at the University of California, San Diego, has identified misfolding and other molecular anomalies in a key brain protein associated with autism spectrum disorders. Palmer Taylor, associate vice chancellor for Health Sciences at UC San Diego and dean of the Skaggs School of Pharmacy and Pharmaceutical Sciences, and colleagues report in the Sept. 10 issue of the Journal of Biological Chemistry that misfolding of a protein called neuroligin-3, due to gene mutations, results in trafficking deficiencies that may lead to abnormal communications between neurons. Genetic misfolding of neuroligins is thought to prevent normal formation and function of neuronal synapses. The gene mutation has been documented in patients with autism. "It makes sense that there's a connection," said Taylor. Neuroligins are post-synaptic proteins that help glue together neurons at synapses by connecting with pre-synaptic protein partners called neurexins.

Photosynthesis and Respiration Google Reader (10) Climate change remains a real threat to corals Hopes that coral reefs might be able to survive, and recover from, bleaching caused by climate change may have grown dimmer for certain coral species, according to new research by University at Buffalo marine biologists published this week in PLoS One. The research shows, for the first time, that while hard corals can take up from the environment new stress-tolerant algae that provide critical nutrients, the coral may not be able to sustain the relationship with these algae over a long period, a process known as symbiosis. The findings may mean that certain types of coral will not be able to adapt rapidly enough to survive global warming, says the study's lead author, Mary Alice Coffroth, PhD, UB professor of geological sciences in the College of Arts and Sciences. The demise of coral reefs deprives fish of food and shelter, which reduces reef fish populations and marine diversity. Co-authors on the paper include Eleni L.

Curriculum Catalyst The Curriculum Catalyst is about crowd-sourcing topic ideas – creating a resource that can be printed off, yes printed, to form the basis for more detailed planning. With the English primary curriculum in a period of flux we are in a great position to push the creative agenda more and more – online networks allow us the opportunity to collaborate on a simple resource to support this. Catalysed Topics Stage 1 An opportunity to contribute and vote for the most interesting or relevant curriculum topic ideas. These will then be the focus of development by the wider education community. Go to the Google Moderator and there are… 1) Contribute a curriculum topic idea + description 2) Vote for you favourite, most interesting or most relevant topic idea Stage 2 After a period of voting we will focus on the top topic and crowd-source an ideas map.