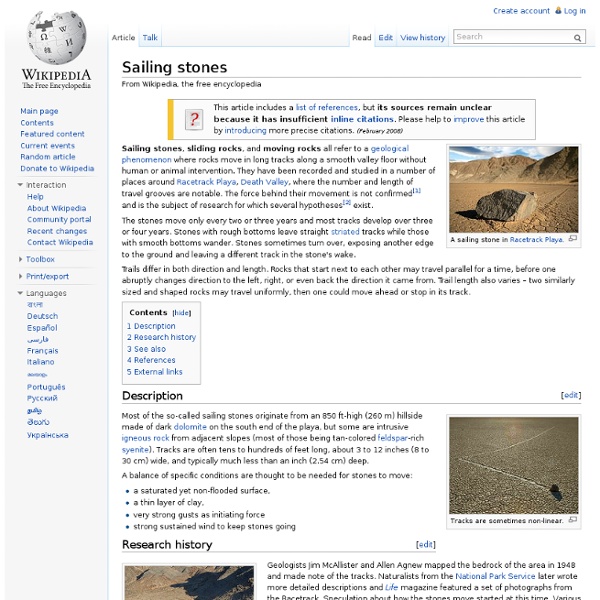 Sailing stones, sliding rocks, and moving rocks all refer to a geological phenomenon where rocks move and inscribe long tracks along a smooth valley floor without human or animal intervention. Tracks from these sliding rocks have been observed and studied in various locations, including Little Bonnie Claire Playa in Nevada,[1] and most notably Racetrack Playa, Death Valley National Park, California, where the number and length of tracks are notable. At Racetrack Playa, these tracks have been studied since the early 1900s, yet the origins of stone movement are not confirmed[2] and remain the subject of research for which several hypotheses[3] exist. The stones move only every two or three years and most tracks develop over three or four years. Trails differ in both direction and length. Description[edit] Tracks are sometimes non-linear. The Racetrack’s stones speckle the playa floor, predominately in the southern portion. And in some hypotheses: ice floes Research history[edit] See also[edit] Related:  How to achieve your life

The Elements Revealed: An Interactive Periodic Table In the October 2011 issue of Scientific American, we celebrate the International Year of Chemistry. Learn more about its impact on our daily lives in our Special Report. UPDATED: 06/18/2013 In honor of the 2013 Lindau meeting, which focuses on chemistry, we have updated our interactive periodic table with links to Nature Chemistry's In Your Element essay series. Each essay tells the story of a particular element, often describing its discovery, history and eventual uses. Main Sources & More to Explore: The Poisoner’s Handbook: Murder and the Birth of Forensic Medicine in Jazz Age New York. Interactive by Krista Fuentes Davide Castelvecchi Davide Castelvecchi is a freelance science writer based in Rome and a contributing editor for Scientific American magazine.

Des activités originales pour des expériences inoubliables ! Human World Human World The women of the Tiwi tribe in the South Pacific are married at birth. When Albert Einstein died, his final words died with him. The nurse at his side didn't understand German. St Patrick, the patron saint of Ireland, was not Irish. The lance ceased to be an official battle weapon in the British Army in 1927. St. Many sailors used to wear gold earrings so that they could afford a proper burial when they died. Some very Orthodox Jew refuse to speak Hebrew, believing it to be a language reserved only for the Prophets. A South African monkey was once awarded a medal and promoted to the rank of corporal during World War I. Born 4 January 1838, General Tom Thumb's growth slowed at the age of 6 months, at 5 years he was signed to the circus by P.T. Because they had no proper rubbish disposal system, the streets of ancient Mesopotamia became literally knee-deep in rubbish. The Toltecs, Seventh-century native Mexicans, went into battle with wooden swords so as not to kill their enemies.

List of emoticons A simple smiley This is a list of notable and commonly used emoticons or textual portrayals of a writer's mood or facial expression in the form of icons. The Western use of emoticons is quite different from Eastern usage, and Internet forums, such as 2channel, typically show expressions in their own ways. In recent times, graphic representations, both static and animated, have taken the place of traditional emoticons in the form of icons. Emoticons can generally be divided into two groups: Western or Horizontal (mainly from America and Europe), and Eastern or Vertical (mainly from east Asia). Western The emoticon in Western style is written most often from left to right as though the head is rotated counter-clockwise 90 degrees. Eastern Eastern emoticons generally are not rotated, and may include non-Latin characters to allow for additional complexity. Unicode characters References

Tanganyika laughter epidemic The Tanganyika laughter epidemic of 1962 was an outbreak of mass hysteria – or mass psychogenic illness (MPI) – rumored to have occurred in or near the village of Kashasha on the western coast of Lake Victoria in the modern nation of Tanzania (formerly Tanganyika) near the border of Kenya.[1] The laughter epidemic began on January 30, 1962, at a mission-run boarding school for girls in Kashasha. The laughter started with three girls and spread haphazardly throughout the school, affecting 95 of the 159 pupils, aged 12–18.[2][3] Symptoms lasted from a few hours to 16 days in those affected. After the school was closed and the students were sent home, the epidemic spread to Nshamba, a village that was home to several of the girls.[4] In April and May, 217 people had laughing attacks in the village, most of them being school children and young adults. The school from which the epidemic sprang was sued; the children and parents transmitted it to the surrounding area. See also[edit]

Fallacy List 1. FAULTY CAUSE: (post hoc ergo propter hoc) mistakes correlation or association for causation, by assuming that because one thing follows another it was caused by the other. example: A black cat crossed Babbs' path yesterday and, sure enough, she was involved in an automobile accident later that same afternoon. example: The introduction of sex education courses at the high school level has resulted in increased promiscuity among teens. A recent study revealed that the number of reported cases of STDs (sexually transmitted diseases) was significantly higher for high schools that offered courses in sex education than for high schools that did not. 2. SWEEPING GENERALIZATION: (dicto simpliciter) assumes that what is true of the whole will also be true of the part, or that what is true in most instances will be true in all instances. example: Muffin must be rich or have rich parents, because she belongs to ZXQ, and ZXQ is the richest sorority on campus. 3. 4. 5. 6. 7. 8. 9. 10. 11. 12. 13.

Charles Bonnet syndrome Charles Bonnet syndrome (CBS) is the experience of complex visual hallucinations in patients with visual loss. First described by Charles Bonnet in 1760,[1][2] it was first introduced into English-speaking psychiatry in 1982.[3] Characteristics[edit] Sufferers, who are mentally healthy people with often significant visual loss, have vivid, complex recurrent visual hallucinations (fictive visual percepts). People suffering from CBS may experience a wide variety of hallucinations. Causes[edit] CBS predominantly affects people with visual impairments due to old age or damage to the eyes or optic pathways. Prognosis[edit] There is no treatment of proven effectiveness for CBS. Treatment[edit] Because there is no prescribed treatment, the physician will consider on a case by case basis whether to treat any depression or other problems that may be related to CBS. History[edit] The disease is named after the Swiss naturalist Charles Bonnet, who described the condition in 1760. See also[edit]

Related:
Related:  How to achieve your life