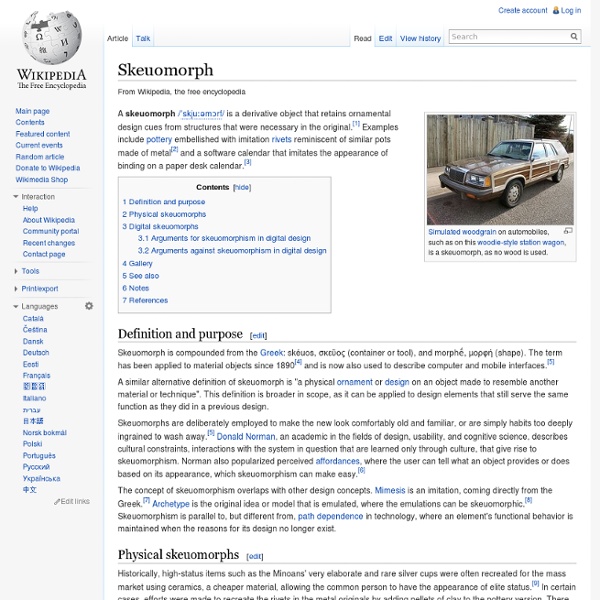 A skeuomorph /ˈskjuːəmɔrf/ is a derivative object that retains ornamental design cues from structures that were necessary in the original.[1] Examples include pottery embellished with imitation rivets reminiscent of similar pots made of metal[2] and a software calendar that imitates the appearance of binding on a paper desk calendar.[3] Definition and purpose[edit] Skeuomorph is compounded from the Greek: skéuos, σκεῦος (container or tool), and morphḗ, μορφή (shape). The term has been applied to material objects since 1890[4] and is now also used to describe computer and mobile interfaces.[5] Skeuomorphs are deliberately employed to make the new look comfortably old and familiar, or are simply habits too deeply ingrained to wash away.[5] Donald Norman, an academic in the fields of design, usability, and cognitive science, describes cultural constraints, interactions with the system in question that are learned only through culture, that give rise to skeuomorphism. Gallery[edit] Notes[edit]

Screw the Power Users I designed HomeSite and TopStyle for power users. Only power users would want to edit HTML & CSS by hand, so I made sure to cater to them. Those products were filled with features and tool buttons, and their settings dialogs contained dozens of geeky options. Customers liked them that way. I liked them that way, too. Why Aren't Our Gadgets Still Covered In Wood? The world of Mad Men is made up of wood of every conceivable grain and color. The show’s sumptuous design palette has been responsible for popularizing midcentury design again, showing everyday objects and funiture that were popular in the 1960s not as the cracked and fading relics of our grandparents’ basements but as objects that define the characters who inhabit Matt Weiner’s vivid, romantic world. But what about the design of 1960s technology? The Sylvania television set veneered in wenge? The record console cabineted in oiled walnut?

How Misinformed Ideas About Profit Are Holding Back The World's Poor I run a for-profit business that delivers products and services to customers earning less than $6 a day in West Africa. When I tell people this, I frequently encounter disbelief or concern. The three most common responses I hear are: Surely you can’t make money working with people who are so poor? Don’t you feel like you are taking advantage of these people by making money from them? Wouldn’t charity do a better job of meeting their needs?

Criticism and Two Way Streets A post by Jason Fried titled “Give it 5 minutes” reminded me of a great technique I learned about from Bill Buxton. Bill is a Principal Researcher in Microsoft where his main role focuses on designing a company that permits great design to happen. As many have learned to their peril, it’s not simply a case of just dumping talent in a room full of Ikea furniture. In large companies you have to design the process that creates design. Circa’s Object-Oriented Approach To Building The News ⚙ Co Since newspapers first started to print, the basic unit of news has been the article, an unstructured blob of data. A news article contains standard elements like a headline, quotes, facts and photos. It has a clear beginning and an end. To report a new fact, a journalist writes an entirely new article.

Eerie Photos Show The Strange Emptiness Of Dubai Recently released timelapses of images from NASA’s Landsat satellite highlight the dramatically rapid urbanization of the desert in places like Dubai over the past couple decades. Cities sprout so quickly from nowhere, you can see the landscape morphing from space. But another photography project is a reminder that these cities are just as shocking to behold up close. Photographer Matthias Heiderich’s series "UAE" reveals a post-modern kingdom in the desert, hauntingly empty and utterly lifeless. Glistening buildings appear unused.

Rarely say yes to feature requests - Inside Intercom Here’s a simple set of Yes/No questions that you can quickly answer before you add another item to your product roadmap. Saying yes to a feature request – whether it’s a to an existing customer, a product enquiry, a teammate, or a manager – is immediately rewarding. It’s an unspoken transaction where you barter long term product focus in exchange for short term satisfaction. Buying short term joy for the cost of long term pain is the human condition. Previously we’ve written about how product strategy means saying no, but a list of reasons to reject a feature isn’t as immediately useful as a test that any new feature must pass.

Design Classics A to Z - Alphabet Print - 67 Inc An affordable way to own 35 of the greatest 20th Century design classics. Objects from chairs to cameras, clocks to record players, inspired by the work of Eames to Jacobsen, we have picked the 35 items we feel represent the most iconic product design and designers of the 20th Century. Illustrated and presented as a collectors set of trading cards on an A2 print this is the first in our series of Alphanumeric / Alphabet prints. If you can't guess them all the answers are on the last card of the set.