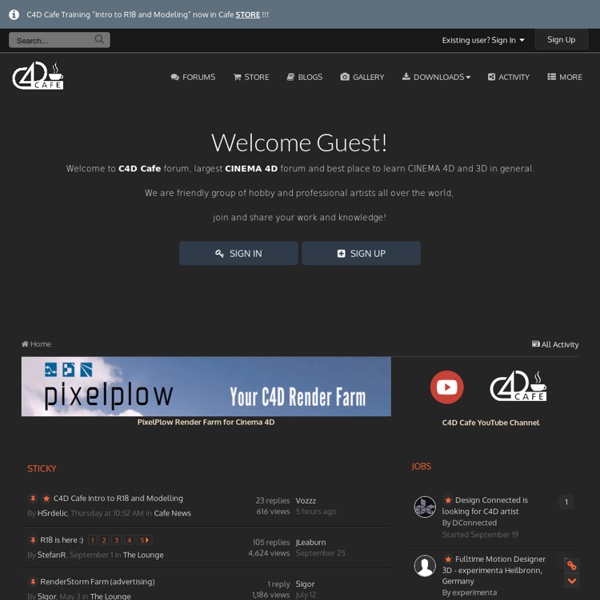 70 Ultimate Cinema 4D Tutorials & Techniques Feb 12 2010 Today we share a very comprehensive round-up of Cinema 4D Tutorials. Cinema 4D is a modeling, animation and rendering application that is noted for its flexible interface and ease of use. It is capable of procedural and polygonal/subd modeling, animating, lighting, texturing and rendering. Cinema 4D comes with an intuitive interface and a sound workflow that let the imagination and creativity of an artist flow freely. Cinema 4D Tutorials Create an Abstract Armored Sphere Scene in Cinema 4DIn this tutorial you will learn how to create a complex abstract Armored Sphere scene in Cinema 4D. Making Of: PrimateranIn this tutorial artist creates a scene that showed a part of the world of the “Primaterans” – a civilization that prefers dark corners of the galaxy, hiding from their enemies until their armada is strong enough to destroy them. On/Off SwitchEnable or disable multiple objects at with one click Increase viewport speed and animation playback.

55 Terrific Cinema 4D Tutorials & Techniques Don't Forget to participate in a contest where you can win an amazing e-Commerce template from TemplateMonster. Cinema 4D is getting very popular day by day mainly due to the body paint functionality. It has artist friendly interface with a customizable work flow. Many films like Spiderman 3, Monster House, Chronicles of Narnia, Beowulf, Polar Express and Superman Returns also used Cinema 4D to present a long lasting effect. People also used Cinema 4D in motion graphics because of its excellent integration with compositing application pipelines. You are welcome if you want to share more Cinema4d Tutorials and Techniques that our readers/viewers may like. Making of Super Snail This work is fully modeled and rendered in Cinema 4D. How to Create Explosive Typographic Effects in Cinema 4D In this tutorial artist will walk through the steps he used to create this illustration to bring alive the word “collide.” 3D Abstract Tentacle Tutorial Creating a Ball Bearing using Arrays On/Off Switch

A R T N A U 83 Nightclub Flyer Samples for Design Inspiration | UPrinting Design Blog by admin | October 25, 2009 | Design Looking for ideas to create a hot and chic flyer that’ll pack your next party? Designing nightclub or party flyers is a challenging project. Disclaimer: The images on this page are not owned by UPrinting and are used solely as design examples. Once you’ve created your flyer design, check out our nightclub flyer printing. Tagged as: Nightclub Flyers This post was written by admin+ Leave a Comment

Cinema 4D Tutorials: 40+ Wickedly Fantastic Tips And Tricks The latest major motion pictures are utilizing 3D animation and motion graphics more and more these days. With movies like The Dark Knight Rises, The Avengers and The Amazing Spider-Man coming to the theaters soon, we have decided to put together a stunning collection of must have Cinema 4D tutorials. These fantastic tutorials will arm you with all the latest tips and tricks to create your own movie like scenes. Now the hard part will be deciding which of these amazing tutorials you will use for your next creation. Hope you enjoy! Want more articles on Motion Graphics Tutorials? After Effects CS4 Tutorials: 40 Creative Tips AE Tutorials: 50 Superb Must Have Effects After Effects Tutorial: 60+ Kick Ass Effects Ironman Stealth Tutorial How to Make An Animated Title Sequence in Cinema 4D and After Effects Cgtuts+ Hollywood Film Studio Logo Animation Series – 20th Century Fox, Part 1 Cgtuts+ Hollywood Film Studio Logo Animation Series – 20th Century Fox, Part 2 SLOW MoDynamics Cinema 4D Tutorial

Visual Music Creation LAB Design a Paint Splashing Effect Into Your Image Create this sophisticated looking design with this step by step tutorial with the help of Media Militia’s awesome paint tossing pack. Yes, its easier than you think! This particular design was featured and printed in the recently held Graphika Manila 2010 as one of the design contribution of Team Manila. About Artist: Heinritzh Sales Time: 1-2 Hours Software Required: Photoshop Resources Used Base Photo Courtesy of Ms.Camille Cordero(Must be used for non-commercial purposes only) Additional Credits: Model: Yas Neri Make-up and Styling: Jaime Bautista-Garcia, Pearl Romano, Rem Lucio Hair: Jay Wee Paint Tossing Pack by Media Militia *I will be using PC here, so just change all Ctrl to Command and Alt to Option if your using a mac. Final Preview Part 1 Open the “base-image_by-camille-cordero.jpg” image and name this layer “Base Image”. Part 2: Body Painting Create a new layer (Shift Ctrl+N) and name it “Body Paint”. First select the brush tool and choose a soft rounded brush. Download the PSD Yeah!

C4D Textures - Textures STASH How to Create Explosive Typographic Effects in Cinema 4D In this tutorial I will walk through the steps I used to create this illustration to bring alive the word “collide.” While you may not find yourself needing to recreate the word “collide,” I hope you will find useful the techniques I will cover: - extruding text in Cinema 4d - using displacement maps in Cinema 4d - using the explosion deformer in Cinema 4d - exporting to photoshop from Cinema 4d - unique color enhancing techniques in Photoshop - various layer modes applied in Photoshop for great light effects (A basic knowledge of Cinema 4d and Photoshop is required) STEP 1: Creating 3d text I created a new document in C4d and added some text with the built in text tool. I typed the word COLLIDE in the Attributes manager. I applied Extrude Nurbs by making it a parent of my text. Parent/child relationship shown above in my Objects Manager. There’s a small problem at this point: The word “collide” is treated as one object and I want to manipulate the individual letters.