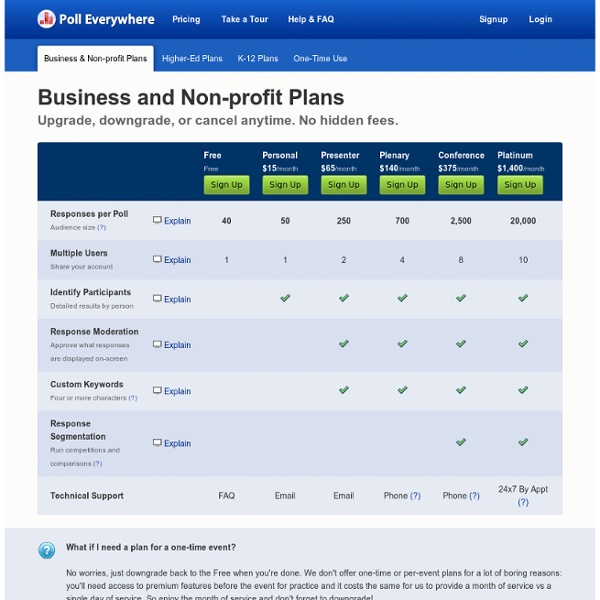 Compare Poll Everywhere vs. SMSPoll, Socrative, Top Hat Monacle, and others Superbelfrzy RP | Blog grupy Superbelfrzy RP - eduzmieniaczy Meeks Educational Technologies > Company Information > History & Description Voting via SMS, Internet, Twitter | Sendsteps | SMS stemmen BCSE - British Council for School Environments Create an interactive college! | Voting via SMS, Internet, Twitter | Shakespeak | Classroom interaction Be part of our user group on Linkedin and start your own discussion with other teachers using Shakespeak during their lectures. The use of Shakespeak during college will help to: Test students their knowledgeGet honest feedback with anonymous responsesAllow everybody to respondRelate to students their mobile phone and social media behaviorUse feedback on any later momentExperience stronger engagement! Download Shakespeak now and experience the effect yourself! Try it now – Free up to 20 People Do you want to hear user experiences? Teacher Chris Kockelkoren and the use of Shakespeak during his college Michel Jansen – Education Advisor University of Amsterdam Use of Shakespeak at CHE University

Where to Find Great Mobile Design Inspiration They say you should never judge a book by its cover: sage advice from back in the day. But now, mobile apps are often judged by their icons and interfaces; all it takes to make a bad impression is a dated design, no matter how useful or well-coded your app is. Good design takes time, and sometimes, you need a little outside help coming up with ideas. If you’re looking for some inspiration for ways to dress up your next mobile app or site, we’ve got a nice list of places you should go to get in the zone. Dribbble Dribbble is an exclusive invite-only community for designers, where they show off concepts and works-in-progress from their projects in 400×300 pixel screenshots. From typography to icons to interfaces to illustrations, you can see some of the world’s best creative minds at work here. MyColorScreen MyColorScreen is a repository of user-submitted Android and iOS home screens and lock screens, detailed with tips on how to recreate those delicious interfaces on your own device. Meerli

Cross Browser Testing. Pick an OS - Pick a Browser - Test website DesignShare Home SMS Education: Poll Everywhere Is Making the Mobile Pop Quiz More Affordable Over 40% of students text during class and 80% say they've never been caught. That sounds like a bit of a quandary for teachers, but not for much longer: Teachers can now hijack students' cell phones for educational purposes, including testing, homework assignments, quizzes, and more. Poll Everywhere, which specializes in instant audience feedback via text messaging, and Mobile Messenger, a technology solutions group that partners with carriers, have partnered to develop affordable, educational SMS programs. As we reported last April, new studies and pilot projects show smartphones can actually make kids smarter, and as a result major foundations are zeroing in on handhelds for preschool and the primary grades. "Student Response Systems typically cost $1,200 per classroom," Poll Everywhere CEO Jeff Vyduna tells Fast Company. This particular classroom initiative will focus on the U.S., but don't think that means the rest of the world isn't eligible. [Image: flickr user compujeramey]