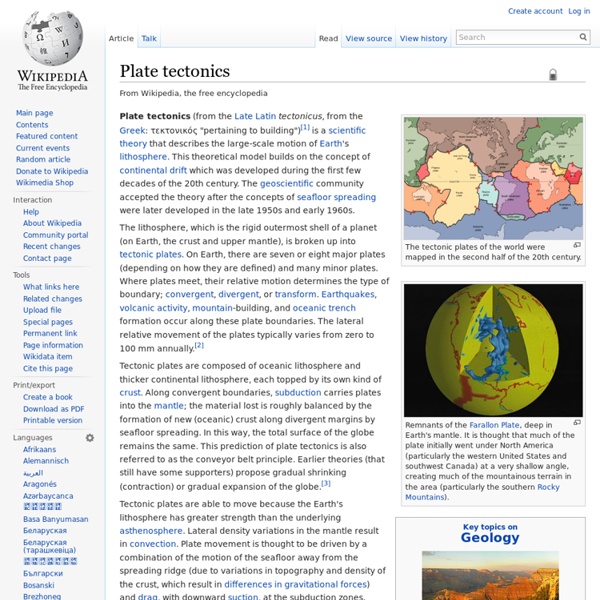 The tectonic plates of the world were mapped in the second half of the 20th century. Remnants of the Farallon Plate, deep in Earth's mantle. It is thought that much of the plate initially went under North America (particularly the western United States and southwest Canada) at a very shallow angle, creating much of the mountainous terrain in the area (particularly the southern Rocky Mountains). Plate tectonics (from the Late Latin tectonicus, from the Greek: τεκτονικός "pertaining to building") is a scientific theory that describes the large-scale motion of Earth's lithosphere. This theoretical model builds on the concept of continental drift which was developed during the first few decades of the 20th century. The geoscientific community accepted the theory after the concepts of seafloor spreading were later developed in the late 1950s and early 1960s. Key principles The outer layers of the Earth are divided into the lithosphere and asthenosphere. Types of plate boundaries Related:  Mesoproterozoic era

Grenville orogeny Extent (orange regions) of the Grenville orogeny, after Tollo et al. (2004) and Darabi (2004). Timescale[edit] The problem of timing the Grenville Orogeny is an area of some contention today. Timeline of the Grenville orogeny, after Rivers (2002) Ages are approximated from the magmatic activity associated with the individual cycles of the orogeny. River’s 2008 paper has now examined the timing of the different periods of the orogeny and reconstructed the timeline based on the spatial and temporal metamorphism of the rocks present. General Tectonics[edit] Reconstruction of the events of the orogeny is ongoing, but the generally-accepted view is that the eastern and southern margins of Laurentia were active convergent margins until the beginning of continental collision. General Lithology[edit] The Grenville Orogeny can be categorized into three sections based on structure, lithology, and thermochronology. The age of this belt is approximately 1.8 to 1.18 Ga. Regional Variations[edit]

Stromatolite Morphology[edit] Fossil record[edit] Archean[edit] Some Archean rock formations show macroscopic similarity to modern microbial structures, leading to the inference that these structures represent evidence of ancient life; namely stromatolites. However others regard these patterns as having been due to natural material deposition or other mechanism, and thus abiogenic. Younger[edit] Stromatolites in the Hoyt Limestone (Cambrian) exposed at Lester Park, near Saratoga Springs, New York. Stromatolites (Pika Formation, Middle Cambrian) near Helen Lake, Banff National Park, Canada Stromatolites are a major constituent of the fossil record for about the first 3.5 billion years of life on earth, peaking about 1.25 billion years ago.[4] They subsequently declined in abundance and diversity,[6] and by the start of the Cambrian had fallen to 20% of their peak. Proterozoic stromatolite fossils may be primordial forms of the eukaryote chlorophytes (that is, green algae). Modern occurrence[edit]

Ancient Egypt Ancient Egypt was an ancient civilization of Northeastern Africa, concentrated along the lower reaches of the Nile River in what is now the modern country of Egypt. It is one of six civilizations globally to arise independently. Egyptian civilization coalesced around 3150 BC (according to conventional Egyptian chronology)[1] with the political unification of Upper and Lower Egypt under the first pharaoh.[2] The history of ancient Egypt occurred in a series of stable Kingdoms, separated by periods of relative instability known as Intermediate Periods: the Old Kingdom of the Early Bronze Age, the Middle Kingdom of the Middle Bronze Age and the New Kingdom of the Late Bronze Age. History Map of ancient Egypt, showing major cities and sites of the Dynastic period (c. 3150 BC to 30 BC) Predynastic period A typical Naqada II jar decorated with gazelles. In Predynastic and Early Dynastic times, the Egyptian climate was much less arid than it is today. Early Dynastic Period (c. 3050 –2686 BC)

Sediment Sediment billowing out from Italy's shore into the Adriatic Sea Sediment is a naturally occurring material that is broken down by processes of weathering and erosion, and is subsequently transported by the action of wind, water, or ice, and/or by the force of gravity acting on the particle itself. Sediments are most often transported by water (fluvial processes), wind (aeolian processes) and glaciers. Classification[edit] Grain size[edit] Sediment size is measured on a log base 2 scale, called the "Phi" scale, which classifies particles by size from "colloid" to "boulder". Composition[edit] Composition of sediment can be measured in terms of: This leads to an ambiguity in which clay can be used as both a size-range and a composition (see clay minerals). Sediment transport[edit] Sediment builds up on human-made breakwaters because they reduce the speed of water flow, so the stream cannot carry as much sediment load. Glacial transport of boulders. Particle motion[edit] where Fluvial bedforms[edit]

Pyramid A pyramid's design, with the majority of the weight closer to the ground,[2] and with the pyramidion on top means that less material higher up on the pyramid will be pushing down from above. This distribution of weight allowed early civilizations to create stable monumental structures. Pyramids have been built by civilizations in many parts of the world. For thousands of years, the largest structures on Earth were pyramids—first the Red Pyramid in the Dashur Necropolis and then the Great Pyramid of Khufu, both of Egypt, the latter the only one of the Seven Wonders of the Ancient World still remaining. Khufu's Pyramid is built mainly of limestone (with large red granite blocks used in some interior chambers), and is considered an architectural masterpiece. It contains around 1,300,000 blocks ranging in weight from 2.5 tonnes (5,500 lb) to 15 tonnes (33,000 lb) and is built on a square base with sides measuring about 230 m (755 ft), covering 13 acres. Ancient monuments[edit] Egypt[edit]

Mesoproterozoic This era is marked by the further development of continental plates and plate tectonics. The first large-scale mountain building episode, the Grenville Orogeny, for which extensive evidence still survives, happened in this period. This era was the high point of the Stromatolites before they declined in the Neoproterozoic. The era saw the development of sexual reproduction, which greatly increased the complexity of life to come. It was the start of development of communal living among organisms, the multicellular organisms. It was an Era of apparently critical, but still poorly understood, changes in the chemistry of the sea, the sediments of the earth, and the composition of the air. Subdivisions[edit] The subdivisions of the Mesoproterozoic are arbitrary divisions based on time. By contrast, the transition from Calymmian to Ectasian has no meaning beyond calendar time. For that matter, they are not completely without biological markers. References[edit] Jump up ^ U. External links[edit]

Mummy Mummies of humans and other animals have been found on every continent,[1] both as a result of natural preservation through unusual conditions, and as cultural artifacts. Over one million animal mummies have been found in Egypt, many of which are cats.[2] (See: Animal mummy) In addition to the well-known mummies of Ancient Egypt, deliberate mummification was a feature of several ancient cultures in areas of South America and Asia which have very dry climates. Etymology and meaning[edit] The OED defines a mummy as "the body of a human being or animal embalmed (according to the ancient Egyptian or some analogous method) as a preparation for burial", citing sources from 1615 CE onward.[8] However, the Chamber's Cyclopaedia, 1727–41, and the Victorian zoologist Francis Trevelyan Buckland.[9] define a mummy as follows: "A human or animal body desiccated by exposure to sun or air. History of mummy studies[edit] Types of mummies[edit] The Egyptian mummies[edit] Mummy in the British Museum