Congress for Kids - Interactive, Fun-filled Experiences About the Federal Government 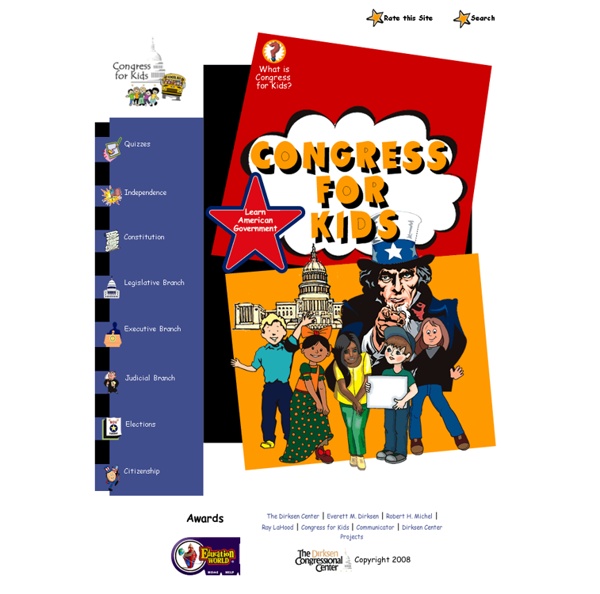 Learning about the federal government doesn't have to be boring. Congress for Kids gives you access to interactive, fun-filled experiences designed to help you learn about the foundation of our federal government and how its actions affect you. Although designed for students in grades fourth through high school, other students, teachers, parents, and interested citizens will find helpful, engaging activities, too. Using appealing, full-color illustrations, and engaging activities, this site will extend your learning in the basics about the American federal government. Uncle Sam is your guide through Congress for Kids. He will introduce you to a new skill or bit of knowledge, or review a skill you already have, or even test your knowledge.

The Washington Post’s Constitution Day quiz (National Archives) Sept. 17 is Constitution Day, celebrating the document that is at the foundation of the United States of America. Take this quiz to see how much you know about the Constitution. Who is considered the father of the Constitution? National Geographic Education Xpeditions is now archived in National Geographic Education's new website—natgeoed.org If you liked Xpeditions, you'll love the new media-rich natgeoed.org. Explore the new site now for activities, maps, interactives, videos, homework help, and more!

Online United States (U.S.) History Quiz for Fun Test your knowledge of the U.S. Constitution with our interactive quizzes! We have four to choose from. 4th Grade Social Studies Resources Links verified 7/2/2013 (3rd Grade ) 4th Grade Social Studies (5th Grade) Return to Grade Level Help.**GREAT TOOLS: Government sites for kids - Numerous resources from the Justice Dept, Department of Treasury's, Digital Diplomacy for Students, National Highway Traffic Safety ,United Nations and too many others to mention.EdSitement's lesson plans - offers high-quality material on the Internet in the subject areas of literature and language arts, foreign languages, art and culture, and history and social studies. Search for grade level specific web sites and lesson plans. . return to the top of the page

Civics For Kids – Learn Our Rights and Duties Civics for Kids - The ultimate place for kids to learn about the civic affairs and the rights and duties of citizens in a very fun and interactive way. Just click on the title or the image of any article to read it. Let your child know about the civics of India and the world, the constitutions and the fundamental rights of people. Let them get acquainted with the many types of government that overlook the order of things in the world or even the Panchayat system that is prevalent in the villages of India. Civics for kids has also the basic teachings that help your child develop an understanding of the political scenario of India in particular and the world in general.

Community Club Home Community Club Firefighter Level A, Community Club What happens when the fire alarm rings? Early readers will follow along with images and audio as a firefighter races to work. Librarian The U.S. Constitution By September 1787, the convention’s five-member Committee of Style (Hamilton, Madison, William Samuel Johnson of Connecticut, Gouverneur Morris of New York, Rufus King of Massachusetts) had drafted the final text of the Constitution, which consisted of some 4,200 words. On September 17, George Washington was the first to sign the document. Of the 55 delegates, a total of 39 signed; some had already left Philadelphia, and three–George Mason (1725-92) and Edmund Randolph (1753-1813) of Virginia, and Elbridge Gerry (1744-1813) of Massachusetts–refused to approve the document. In order for the Constitution to become law, it then had to be ratified by nine of the 13 states.

Types of Governments Maps of WorldCurrent, Credible, Consistent World Map / Thematic Maps / Types of Governments Get Custom Mapping Quote +1 408 637 0064| sales@mapsofworld.com Types of Governments Search Types of Government (for Kids) Gully cricket is popular amongst young boys in India. They just troop into a street with little traffic outside their homes and start hitting the ball with the bat. Now, there are a number of ways in which this can be organized. When only one boy brings a bat, he rules. 4 TED-Ed Lessons to watch on Constitution Day On September 17, 1787, thirty-nine men emerged from the last meeting of the Constitutional Convention, having signed the US Constitution — a document that had been debated behind closed doors in the sweltering heat, shrouded by secrecy. On the 227th anniversary of that day, check out these 4 TED-Ed Lessons that investigate the history and content of this iconic document. First thing’s first — how did a meeting intended to revise the Articles of Confederation lead to the new Constitution for the United States? Discover how a handful of men changed the course of history for America in 1787.

Democracy - A short introduction Take a look at What is Democracy? to learn about the main elements and principles of a democratic government. Also don't forget to understand democracy through the lens of history which will provide more context for its present day form. What Is a Civil Right? Each year on the third Monday of January, Americans celebrate Martin Luther King, Jr. Day. This federal holiday marks the birthday (January 15) of Rev. Dr. Martin Luther King, Jr.

134. The Universal Declaration of Human Rights Today, October 16, is Blog Action Day, where thousands of different bloggers from all over the world post about the same theme. This year’s theme is HUMAN RIGHTS. After surfing the net trying to get an idea of what I could contribute, I kept coming across articles about how governments seem to be ignoring people’s human rights more and more these days. 100 Civics Questions and Answers with MP3 Audio (English version) The 100 civics (history and government) questions and answers for the naturalization test are listed below. The civics test is an oral test and the USCIS Officer will ask the applicant up to 10 of the 100 civics questions. An applicant must answer 6 out of 10 questions correctly to pass the civics portion of the naturalization test. On the naturalization test, some answers may change because of elections or appointments. As you study for the test, make sure that you know the most current answers to these questions. Answer these questions with the name of the official who is serving at the time of your eligibility interview with USCIS.