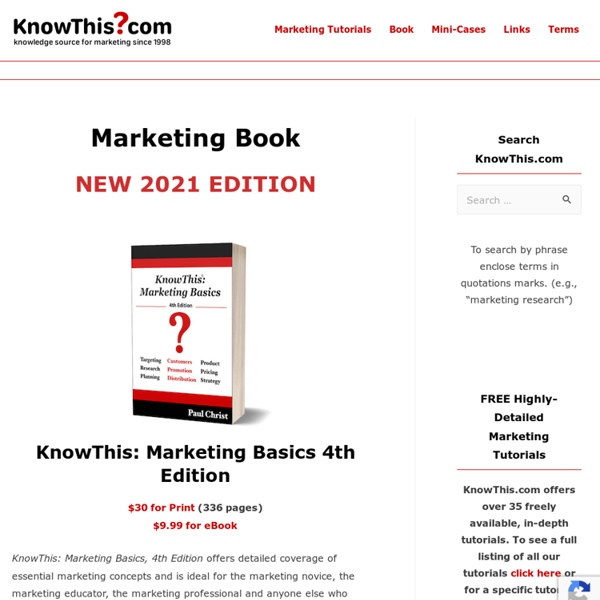 All About Marketing Guidelines for developing, marketing and evaluating nonprofit programs are included in the book Field Guide to Nonprofit Program Design, Marketing and Evaluation . The vast majority of the guidelines apply to for-profit marketing as well. Sections of This Topic Include Basics and Planning Basics -- and Misunderstanding -- About Marketing (below on this page) 60+ Beautiful Photoshop Logo Tutorials And Resources When we talk about a famous brand, the first thing that comes to mind is its logo. The logo is the most essential component of any personal brand and also the hardest part to execute. A logo must be appropriate, aesthetically pleasing and a reflection of the company’s credibility. Furthermore, a logotype should be synonymous with the company or product it represents and should penetrate people’s minds as a selling agent.

Future IPhone Will Support China Mobile's 4G Network ~ Mobile News Future versions of Apple's iPhone will support China Mobile's fourth generation (4G) network, China's largest mobile carrier said, a sign that it will eventually offer the iconic device to its 600 million customers. China Mobile's chairman Wang Jianzhou reported the development on Thursday, according to a company spokeswoman. Both Apple and the carrier have reached a consensus on the development of Long-Term Evolution (LTE), a 4G technology that can allow mobile phones to exchange data at much faster rates. When Apple releases iPhones built for 4G networks, the devices will also support China Mobile's version of this technology known as LTE TDD (Time-Division Duplex), Wang said. China Mobile has been in discussions with Apple since 2007 about selling its iPhone product, but the companies have yet to reach agreement. Part of those discussions have revolved around China Mobile's third-generation technology known as TD-SCDMA (Time Division Synchronous Code Division Multiple Access).

iPad 2 Camera Has Only 23 Active Daily Users ~ Mobile News According to Flickr’s camera usage statistics, the iPad 2′s camera is used by very few people — only 23 active daily users. And so far, 12,811 photos have been taken and uploaded to Flickr with the device.By comparison, the iPhone 4 has 4,402 daily active users; more than a million photos have been taken with the device. We don’t have exact numbers of iPad 2 sales, but the tablet has been on the market since March 11. Opinions on Corporate and Brand Identity Work UnderConsideration is a graphic design firm generating its own projects, initiatives, and content while taking on limited client work. Run by Bryony Gomez-Palacio and Armin Vit in Austin, TX. More… products we sell Flaunt: Designing effective, compelling and memorable portfolios of creative work. Brand New Conference videos / Individual, downloadable videos of every presentation since 2010.

3 Pressing Questions Facing the Future of Social Media Soren Gordhamer is the organizer of the Wisdom 2.0 Conference, which brings together staff from Google, Facebook, Twitter and Zynga along with Zen teachers and others to explore living with awareness and wisdom in our modern age. He is SorenG on Twitter. The conversation about social media in our society is shifting significantly. We're no longer asking questions like, “Will people use social media?” or “Are sites like Facebook and Twitter simply trends that will soon lose steam?” After billions of tweets and 600 million people on Facebook, it’s settled: People want to share online. Marketing News & Expert Advice The importance of headlines should never be overlooked, a little time spent finding the right headline can make a lot of difference. A good headline means more people will click on your article wherever they see it, it ensures that the effort you spent in writing an article doesn’t go to waste, and it can also help your content to be picked up by search engines in the weeks and months after publishing. Here are a few areas to think about when writing headlines. It should be noted though, that its not about writing sensation headlines for short-term traffic gains, it’s about ensuring that, if you write a quality article, the headline works to sell it.