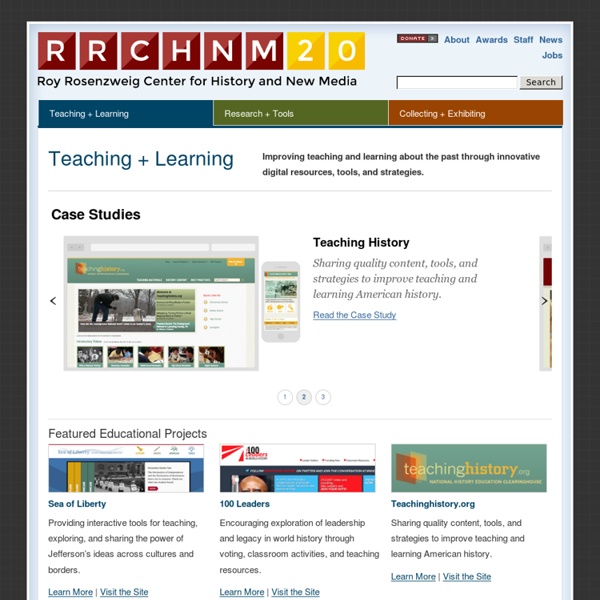 Web 2.0 Tools for Kids Page 1 / 28 1. Mind42 2. Bubble.us 3. Blendspace - Create lessons with digital content in 5 minutes Make mobile learning awesome! Student creation Share materials Free! Get our new app! Save time by using free lessons & activities created by educators worldwide! The secret maritime history of the Aborigines in settling of Australia - Australasia, World But within a few years, and despite a smallpox epidemic that wiped out half the indigenous population, Aborigines in the Sydney area had adapted to the new reality. Having never ventured outside Sydney harbour before, they accompanied the English on globe-trotting voyages, witnessing the founding of new settlements and helping to explore new frontiers. This little-known aspect of early Australian colonial history has been pieced together for an exhibition at the New South Wales State Library that provides a fresh perspective on the impact of European occupation.

A Must Have Google Drive App for Teachers May 8, 2014 Since the introduction of add-ons to Google Drive a few weeks ago, I tried several of these extensions on my Google Drive and I am really impressed by the great service some of them offer. Today, I am sharing with you one of my favourite apps to use on Google Sheets. This add-on is called Doctopus. Doctopus is a handy Spreadhseet script which allows teachers to make copies and hand out google Drive files to students listed in a Google Sheet. inklewriter - Education Education inkle is looking to bring interactive stories to the classroom, and give teachers free and simple get-stuck-right-in software to use with their students. From within a web-browser, the inklewriter will let students make and play interactive stories with no programming required. Why make stories interactive anyway? The way our stories work is simple: the reader is given the text of a story in a small chunks, and after each, they get to make a decision about what happens next.

First Americans 'reached Europe five centuries before Columbus discoveries' When Christopher Columbus paraded his newly discovered American Indians through the streets of Spanish towns at the end of the 15th century, he was not in fact introducing the first native Americans to Europe, according to new research. Scientists who have studied the genetic past of an Icelandic family now claim the first Americans reached Europe a full five centuries before Columbus bumped into an island in the Bahamas during his first voyage of discovery in 1492. Researchers said today that a woman from the Americas probably arrived in Iceland 1,000 years ago, leaving behind genes that are reflected in about 80 Icelanders today. The link was first detected among inhabitants of Iceland, home to one of the most thorough gene-mapping programs in the world, several years ago. Initial suggestions that the genes may have arrived via Asia were ruled out after samples showed they had been in Iceland since the early 18th century, before Asian genes began appearing among Icelanders.

Making Thinking Visible with Socrative Project Zero, an educational research group at Harvard’s Graduate School of Education, has been working to enhance student learning, thinking and creativity since the 1960s. Founded by the philosopher Nelson Goodman it’s impacted global education and been guided by such education luminaries as Howard Gardner and David Perkins. Utilizing it’s core concepts and adding a dash of Socrative will bolster student reflection, critical thinking, and creativity while developing independent learners for the 21st century.

How to Google like a boss - Become a master of Google search with these little-known tips No doubt about it, Google Search has revolutionized the way we do research. Gone are the days when we need to reside in the library for days-on-end just to finish work we’ve set ourselves to do. What is great about Googleling for research is that you can do it in your favorite cafe while sipping cups of your choice brew. Join me as we peruse this resource I found while I Googled like a boss at Tribeca Coffee, Ilocos Norte. Paul Halsall/Fordham University: Internet History Sourcebooks Project Internet History Sourcebooks Project Paul Halsall, Editor Last Modified: Dec 11 | linked pages may have been updated more recently The Internet History Sourcebooks Project is a collection of public domain and copy-permitted historical texts presented cleanly (without advertising or excessive layout) for educational use. 1. This project is both very large and fairly old in Internet terms. At the time it was instigated (1996), it was not clear that web sites [and the documents made available there] would often turn out to be transient.

Creative Commons for Educators When it comes to finding free and open educational resources many educators used to face an uphill battle. This all changed with the foundation of Creative Commons (CC) by a group of thought leaders, education experts, technologists, legal scholars, investors, entrepreneurs and philanthropists back in 2001. The idea being that anybody (including educators) can freely share their intellectual content through a cleverly crafted licensing system that complies with current copyright laws. The first version of the licenses was introduced in 2002 with a specific set of permissions established by the Creative Commons foundation; since then three versions have been released. The Creative Commons licensing system allow content creators to share as much or little content as they want to. The group celebrated their 10th year anniversary this past December and currently are in the process of putting the finishing touches to version 4.0 of the licensing scheme.