Patches – Explore, Create and Publish VR on the Web 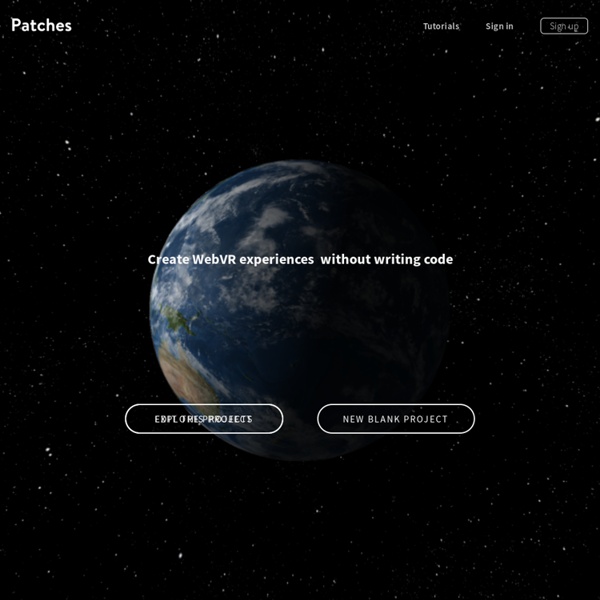 Five Ways to Create Mind Maps and Flowcharts Online Earlier this week Tony Vincent Tweeted an excellent graphic that he made to show the process of creating a flowchart in Google Drawings. Tony's graphics are always top notch and this one was not an exception to that rule. Check it out. — Tony Vincent (@tonyvincent) June 18, 2018 For those who would like a video overview of how to make a flowchart or mind map in Google Drawings, I have one for you. You can do a similar thing in Google Slides and in PowerPoint. Connected Mind is a free mind mapping tool that you can use in your web browser and is also available as an iOS app and as an Android app. Finally, Padlet offers a nice feature that will let you collaboratively create flowcharts.

Professional Development | ARVRinEDU | Jaime Donally Getting Started with Patches In this series of blog posts, we're going to walk through the basic functions of using Patches to create VR experiences on the Web. We’ll look at creating simple scenes in the world editor, importing & texturing models, setting up interaction with the patch system and publishing scenes. In part 1, we're looking at the basics of the interface. If you'd prefer a video walkthrough, you can start with the one below. And there are more at our YouTube channel. The Tools First you'll need to sign up. Please open the example file at patches.vizor.io/examples/ball The interface elements you can see are the main Toolbar at top. Beneath that is the Status Bar, showing you which mode you're in, the file name, and the breadcrumb navigation for the Graph layer. In the main screen, the World Editor. At the bottom right, a camera View Switcher, and at centre fullscreen and play controls. You can control the editor camera with your mouse controls. Build and Program Now press Tab to go into Program mode.

Home - Barefoot Computing Barefoot Computing Best VR games 2018: the 25 top VR games on PC, consoles and mobile You spoke up, and we listened. It’s clearer than ever that, these days, virtual reality (VR) is treated like a novelty. Even with the best VR games to date, your headset is in the corner of your living room. Maybe it’s starting to collect dust alongside the PlayStation Move controllers you never thought you would have to buy at all, let alone at a premium. But, VR is far from dead. The various digital storefronts might not do the best job at highlighting the best VR games you can play in 2018, but we’ve tailored our recommendations to make up for the ostensible VR gaming drought. So, dust off those head-mounted displays and keep reading for the most immersive gaming experiences you will ever have in your life. Joe Osborne and Gabe Carey have also contributed to this article Error loading player: No playable sources found While you’re at it, we’ve spotted the best gaming keyboards to buy as well

WPanorama - Download panoramic pictures Gazebo Lake, Green Mountain Falls (Colorado, USA) © Vic Garcia 10 images with tripod, stitched with Autopano, Canon SX1 Dimensions: 5'639x768 pixels Download size: 1.07 Mb This panorama is also available in high resolution (21'016x2'862 pixels, 14.58 Mb) Downloaded 1'976 times in 3'124 days (15 over the last ten days) Last time today Gorgeous pictures of Vic's trips on his site www.garciatrips.com,as well as astounding videos of wild animals on youtube Flippity.net: Easily Turn Google Spreadsheets into Flashcards and Other Cool Stuff Fabulous FETC Finds - AR, VR, MR & AI In January, I had the amazing opportunity to travel to Orlando, Florida for FETC 2018 (Future of Education Technology Conference). Believe it or not, it was the first time I had ever attended! What I loved most about it was the number of tracks offered: Administrator, Information Technology, Educator, Special Education, and Early Learning. There truly was something there for everyone, and so many sessions that it literally took hours to choose a single day's worth of sessions. Though my intended focus was Computer Science, I found myself drawn in by some of the other offerings. Below are some of the amazing things I learned about the world of AR, VR, MR, and AI. Augmented Reality (AR): a technology that superimposes a computer-generated image on a user's view of the real world, thus providing a composite view. JigSpace - Explore and learn about objects in 3D. iOS only at this time. AirMeasure - An AR measuring toolkit. Seeing AI: Narrates the world.

Blog | Edueto We lost the pricing…for good! We’ve decided that Edueto should be completely for free. As of today, the pricing is gone, and the full product is available for free. We want to keep perfecting Edueto, and we feel like we’ll more likely achieve it without charging our users along the way. In a very short period of time, we managed to make some happy customers, but we want more…we want fans, supporters, ambassadors, lovers and enthusiasts. Paying customers with valid licenses are being reimbursed. So go and work with Edueto. Talk to us, tell us what you want, tell us what you need. Your Edueto team. Virtual Reality Tour of Apollo 11 Spacecraft - K-12 Technology - November 15, 2017 - Big Deal Media Nov 15, 2017 The Smithsonian Institution has made available a high-resolution 3D scan of the command module Columbia, the spacecraft that carried astronauts Neil Armstrong, Edwin “Buzz” Aldrin, and Michael Collins to the Moon during the Apollo 11 mission. The highly detailed model allows anyone with an internet connection to explore the entire craft, including its intricate interior, which is not possible when viewing the artifact in the Smithsonian’s National Air and Space Museum. The Smithsonian is also making the data files of the model available for free download so the module can be 3D printed or viewed with virtual reality goggles. Plus: The Smithsonian will celebrate and honor the 50th anniversary of one of the greatest achievements of human history with the traveling exhibition Destination Moon: The Apollo 11 Mission. STEM • STEAM • STREAM Science 21st Century Themes Related Content Get Our Newsletters