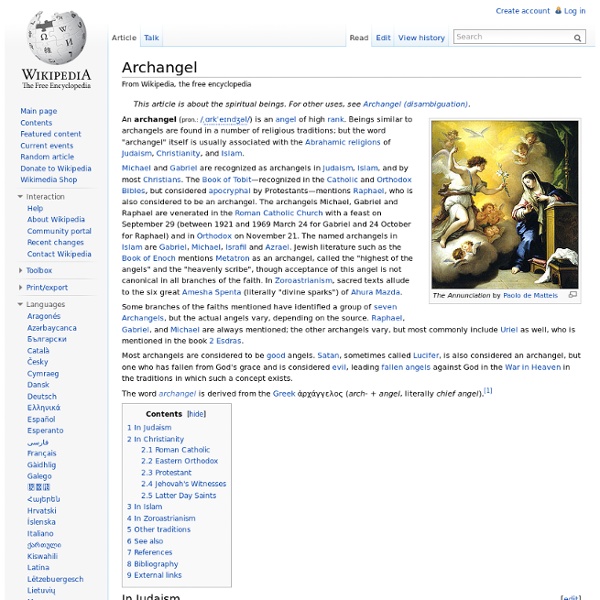 An archangel /ˌɑrkˈeɪndʒəl/ is an angel of high rank. Beings similar to archangels are found in a number of religious traditions; but the word "archangel" itself is usually associated with the Abrahamic religions of Judaism, Christianity, and Islam. Some branches of the faiths mentioned have identified a group of seven Archangels, but the actual angels vary, depending on the source. Raphael, Gabriel, and Michael are always mentioned; the other archangels vary, but most commonly include Uriel as well, who is mentioned in the book 2 Esdras. The word archangel is derived from the Greek ἀρχάγγελος (arch- + angel, literally chief angel).[2] In Judaism[edit] There are no explicit references to archangels in the canonical texts of the Hebrew Bible (Old Testament). In Christianity[edit] Guido Reni's Archangel Michael Trampling Satan, 1636. Roman Catholic[edit] In Roman Catholicism, three are honoured by name: GabrielMichaelRaphael Eastern and Oriental Orthodox[edit] Protestant[edit] Related:  Angels and Demons

Gabriel In Abrahamic religions, Gabriel (Hebrew: גַּבְרִיאֵל, Modern Gavri'el Tiberian Gaḇrîʼēl, God is my strength; Arabic: جبريل, Jibrīl or جبرائيل Jibrāʾīl) is an angel who typically serves as a messenger sent from God to certain people. In Islam, Gabriel (Jibra'il) is considered one of the four archangels whom God sent with his divine message to various prophets, including Muhammad.[6] The 96th chapter of the Quran, sura Al-Alaq, is believed by Muslims to be the first surah revealed by Gabriel to Muhammad. Judaism[edit] Gabriel is interpreted by the Rabbanim to be the "man in linen" in the Book of Daniel and the Book of Ezekiel. In the Book of Daniel, he is responsible for interpreting Daniel's visions. Gabriel's main function in Daniel is that of revealer, a role he continues in later literature.[7] In the Book of Ezekiel, Gabriel is understood to be the angel that was sent to destroy Jerusalem. In Kabbalah, Gabriel is identified with the sephirot of Yesod. Intertestamental literature[edit]

Raphael (archangel) Raphael (Standard Hebrew רָפָאֵל, Rāfāʾēl, "It is God who heals", "God Heals", "God, Please Heal") is an archangel of Judaism and Christianity, who in the Judeo-Christian tradition performs all manners of healing. In Islam, Raphael is the same as Israfil. Raphael is mentioned in the Book of Tobit, which is accepted as canonical by Catholics, Orthodox, and some Anglo-Catholics, and as useful for public teaching by Lutherans and Anglicans. Raphael is generally associated with the angel mentioned in the Gospel of John as stirring the water at the healing pool of Bethesda. The angels mentioned in the Torah, the older books of the Hebrew Bible, are without names. Raphael is named in several Jewish apocryphal books (see below). Raphael bound Azazel under a desert called Dudael according to Enoch 10:4–6: And again the Lord said to Raphael: 'Bind Azazel hand and foot, and cast him into the darkness: and make an opening in the desert, which is in Dudael, and cast him therein. Tobias and the Angel

Uriel Uriel (אוּרִיאֵל "El/God is my light", Auriel/Oriel (God is my light) Standard Hebrew Uriʾel, Tiberian Hebrew ʾÛrîʾēl) is one of the archangels of post-Exilic Rabbinic tradition, and also of certain Christian traditions. In Judaism and Christianity[edit] Name and origins[edit] Uriel is often identified as a cherub and angel of repentance.[4] He "stands at the Gate of Eden with a fiery sword",[5] or as the angel who "watches over thunder and terror".[6] In the Apocalypse of Peter he appears as the Angel of Repentance, who is graphically represented as being as pitiless as any demon. He checked the doors of Egypt for lamb's blood during the plague. In Thomas Heywood's Hierarchy of Blessed Angels (1635), Uriel is described as an Angel of the Earth. At the Council of Rome of 745, Pope St. In the first half of the 11th century Bulgarian followers of the dualist heresy called Bogomilism who lived in the dukedom of Ahtum in present day Banat invoked Uriel in rituals. In Enoch[edit] Amen[14]

Samael Samael (Hebrew: סמאל‎) (also Sammael or Samil) is an important archangel in Talmudic and post-Talmudic lore, a figure who is accuser, seducer and destroyer, and has been regarded as both good and evil. It is said that he was the guardian angel of Esau and a patron of the Roman empire. In Judaism[edit] In Jewish lore, Samael is said to be the angel of death, the chief ruler of the Fifth Heaven and one of the seven regents of the world served by two million angels; he resides in the Heaven. According to The Ascension of Moses[2] Samael is also mentioned as being in 7th Heaven: In the last heaven Moses saw two angels, each five hundred parasangs in height, forged out of chains of black fire and red fire, the angels Af, "Anger," and Hemah, "Wrath," whom God created at the beginning of the world, to execute His will. It is also said that the Baal Shem once summoned Samael, to make him do his bidding.[4] In Gnosticism[edit] In anthroposophy[edit] References[edit] Bunson, Matthew, (1996).

Sandalphon Sandalphon (Hebrew: סָנְדַלְפוֹן‎; Greek: Σανδαλφών) is an archangel in Jewish and Christian writings. Sandalphon figures prominently in the mystical literary traditions of Rabbinic Judaism and early Christianity, notably in the Midrash, Talmud, and Kabbalah. Origin[edit] Meaning of name[edit] The name Sandalphon, the protector of unborn children. Descriptions and functions[edit] Physical descriptions of Sandalphon vary depending on the source. The ancient sages also referred to him by the name Ophan (Hebrew for "wheel"), a reference to the "wheel within the wheel" from Ezekiel's vision of the merkabah (heavenly chariot) in Ezekiel chapter 1.[7] Sandalphon is also said to be instrumental in bringing about the differentiation of sex in the embryo.[6] In Kabbalah, Sandalphon is the angel who represents the sephirah of Malkhut[8] and overlaps (or is confused with) the angel Metatron. References[edit]

Satan Satan (Hebrew: שָּׂטָן satan, "adversary,"[1]) is a term, later a character appearing in the texts of the Abrahamic religions[2][3] who personifies evil and temptation, and is known as the deceiver that leads humanity astray. The term is often applied to an angel who fell out of favor with God, seducing humanity into the ways of sin, and who now rules over the fallen world. Satan is primarily understood as an "accuser" or "adversary" in the Hebrew Bible, and is not necessarily the personification of evil that he would become in later Abrahamic religions. In the New Testament, Satan is a name that refers to a decidedly malevolent entity (devil) who possesses demonic god-like qualities. In Theistic Satanism, Satan is considered a positive force and deity who is either worshipped or revered. In LaVeyan Satanism, Satan is regarded as holding virtuous characteristics.[4][5] Judaism Hebrew Bible Thirteen occurrences Job ch.1–2 (10x),[8]Zechariah 3:1–2 (3x).[9] Book of Job Second Temple period

Michael (archangel) Michael ("who is like God?", Hebrew: מִיכָאֵל‎ (pronounced [mixåˈʔel]), Micha'el or Mîkhā'ēl; Greek: Μιχαήλ, Mikhaḗl; Latin: Michael (in the Vulgate Michahel); Arabic: ميخائيل‎, Mīkhā'īl) is an archangel in Jewish, Christian, and Islamic teachings. Roman Catholics, the Eastern Orthodox, Anglicans, and Lutherans refer to him as "Saint Michael the Archangel" and also as "Saint Michael". Orthodox Christians refer to him as the "Taxiarch Archangel Michael" or simply "Archangel Michael". Michael is mentioned three times in the Book of Daniel, once as a "great prince who stands up for the children of your people". In the New Testament Michael leads God's armies against Satan's forces in the Book of Revelation, where during the war in heaven he defeats Satan. "At that time Michael, the great prince who protects your people, will arise." In view of this, Michael is seen as playing an important role as the protector of Israel, and later of the Christian Church. "...there was war in heaven.