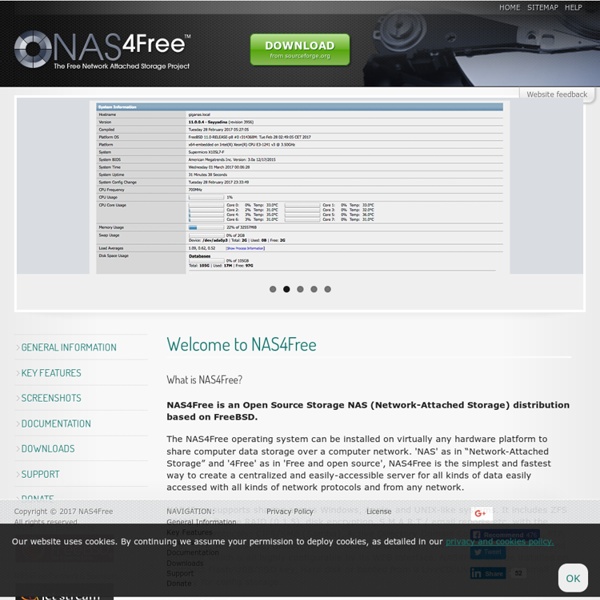 Five Best NAS Enclosures Yeah, and then hook up the 100$ computer case, and watch it as it... does absolutely nothing. Then realize it has no motherboard, no CPU, no RAM, no NIC... "wait, cancel that donation!" $100 on case + MB + CPU + RAM + OS SSD (64GB) $600 on 4x3tb HD ZFS Best Practices Guide - Siwiki From Siwiki [edit] ZFS Administration Considerations [edit] ZFS Storage Pools Recommendations This section describes general recommendations for setting up ZFS storage pools. [edit] System/Memory/Swap Space Run ZFS on a system that runs a 64-bit kernel One GB or more of memory is recommended. ZFS Raidz Performance, Capacity and Integrity Comparison July 15, 2014 comparing speed, space and safety per raidz type The ZFS file system on FreeBSD and Ubuntu Linux is incredible. ZFS has data integrity verification, protection against data corruption, support for high storage capacities, great performance, replication, snapshots and copy-on-write clones, and self healing which make it a natural choice for data storage. The most asked question we hear when talking about raids is, "Which raid is the best?"

Open Media Vault – Installation « Kentish This guide was created for my friend who was new to setting up a server and configuring Open Media Vault, Sickbeard and SABNzb etc. Basically he had been round to my house and said how did you do all those cool things with XBMC and several beers later I offered to so him how and thought that this might help some others as well! Over the years and it’s been a few. For help and support I’ve used the excellent forums at XBMC and Ubuntu along the way. The guide is my own work but the knowledge in it has been taken mostly from forum posts. So thank you to those communities.

A FreeBSD 10 Desktop How-to » Cooltrainer.org FreeBSD is a fast, secure, modern Unix-like operating system with a fantastic community, great documentation, and powerful technologies like ZFS and LLVM. It’s my operating system of choice for everything from my beefy i7-2600k desktop to my home router to my ARM plug computer jukebox. Though famed for its uptime in the datacenter the same OS is just as suited to desktop or laptop computing with a little work. Why use FreeBSD? Maybe I’m just getting old, but it’s nice to use an operating system that didn’t spawn a billion-dollar anti-malware industry through frequent security failings, where you can choose the interface you like and reasonably expect it to stay that way instead of being forced into the design fad du jour, where you don’t have to argue about the init system being replaced two times in the same decade, and whose key organizations don’t collectively kowtow to Microsoft when convenient.

Easily batch resize high-resolution photos with FreeSizer, a portable and extremely lightweight program For lack of a better phrase, bulk resizing images can be a real pain in the ass. It doesn’t truly matter what photo editing software you use, they all pretty much require you to resize each image manually. If you only have ten or twenty images to work with, then it’s not quite so bad. On the other hand, if you have a hundred photos or more to resize, it’s going to take you a very long time.

Build your own NAS Following on from my last post where I mentioned this fantastically simple software for creating your own NAS (ideal for BackupAssist‘s Rsync feature), in this post I’m going to take things a step further and outline how to go about setting it up. Getting started After installing OpenMediaVault (OMV) you’re able to log into the main Web interface to start configuring your storage space and services. Before you go any further I highly recommend you change the default Web admin password from ‘openmediavault’ to something a little more secure, and you can do this under the General settings tab. Allocating your disks and storage space

How To Install and Manage Ports on FreeBSD 10.1 Introduction FreeBSD is a powerful operating system capable of functioning in a variety of roles. Part of what makes this operating system an ideal choice in many scenarios is its reputation for flexibility. A large contribution to this reputation comes from FreeBSD's supported method for installing software from source, known as the ports system.