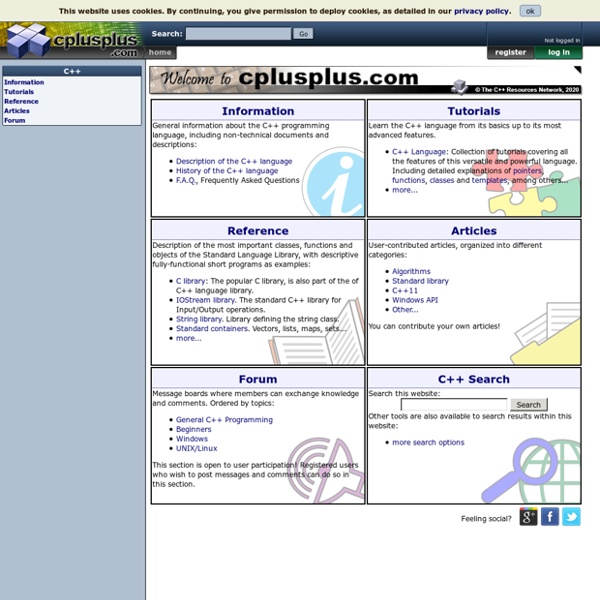 cybercrime Cybercrime, also called computer crime, the use of a computer as an instrument to further illegal ends, such as committing fraud, trafficking in child pornography and intellectual property, stealing identities, or violating privacy. Cybercrime, especially through the Internet, has grown in importance as the computer has become central to commerce, entertainment, and government. Because of the early and widespread adoption of computers and the Internet in the United States, most of the earliest victims and villains of cybercrime were Americans. Smalltalk Welcome to Smalltalk.org. Getting The Message The Essentials of Message-Oriented Programming with SmalltalkBy Alan Lovejoy. Smalltalk is a foundational programming language that is based on pervasive message passing, pervasive dynamic strong typing, pervasive reflection and pervasive object orientation. Message passing: Almost all computation in Smalltalk happens via the sending of messages.

Pointers In earlier chapters, variables have been explained as locations in the computer's memory which can be accessed by their identifier (their name). This way, the program does not need to care about the physical address of the data in memory; it simply uses the identifier whenever it needs to refer to the variable. For a C++ program, the memory of a computer is like a succession of memory cells, each one byte in size, and each with a unique address. These single-byte memory cells are ordered in a way that allows data representations larger than one byte to occupy memory cells that have consecutive addresses.

Cybersecurity and privacy Web-based attacks in the EU and around the world increased by 38% during 2015. Unsurprisingly, security against online accidents and crime has become central to consumer confidence and the online economy. The European Union is promoting cybersecurity on a number of fronts. The EU Cybersecurity Strategy, adopted in 2013, sets out ways to strengthen network and information security across the EU. C (programming language) C is one of the most widely used programming languages of all time,[8][9] and C compilers are available for the majority of available computer architectures and operating systems. C is an imperative (procedural) language. It was designed to be compiled using a relatively straightforward compiler, to provide low-level access to memory, to provide language constructs that map efficiently to machine instructions, and to require minimal run-time support. C was therefore useful for many applications that had formerly been coded in assembly language, such as in system programming. Despite its low-level capabilities, the language was designed to encourage cross-platform programming.

Basics of C++ Namespace Forward: In this part of the series, I talk about the basics of C++ Namespace. By: Chrysanthus Date Published: 7 Feb 2013 Introduction C++ Tutorial C++ is a middle-level programming language developed by Bjarne Stroustrup starting in 1979 at Bell Labs. C++ runs on a variety of platforms, such as Windows, Mac OS, and the various versions of UNIX. This reference will take you through simple and practical approach while learning C++ Programming language. Web 2.0 teaching tools to enhance education and learning — Edjudo 3D Projects Alice – Alice is an innovative 3D programming environment (free) Blender – Excellent open source 3D content creation suite (free, must install) PhotoSynth – A Microsoft web application that takes your photos, mashes them together and recreates a 3D scene out of them that anyone can view and move around in. Windows only. (free)

Programmers: Please don't ever say this to beginners ... Here's a sample interaction between an experienced programmer and a beginner who is just learning programming: Programmer: Hey, I hear you're learning programming. Cool, what're you learning? Beginner: I'm starting with some basic PHP and HTML using TextMate on my Mac. 8 free sites that teach you how to program Developed in 2011, the main focus of Code Academy is to teach you how to code so that you can transform your career. It features a number of success stories from individuals who knew little to nothing about coding and went on to have fruitful careers as programmers. Code Academy covers a lot of ground, including how to make interactive websites. You can take courses in Rails, Angularjs, Rails Auth, The Command Line, HTML & CSS, JavaScript, iQuery, PHP, Python and Ruby. They are constantly adding new programs as well, so if nothing piques your interest now, you can always check back in a few months to see what they have added to their course load. The courses on Code Academy are free and it has become a well-known and respected resource for anyone yearning to learn how to code.