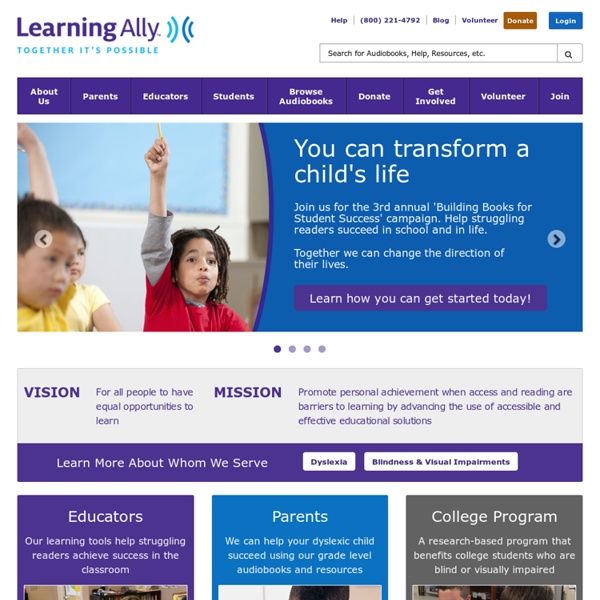 Related:  School Libraries & the Needs of All Learners • Selecting Lit

BARD Access - National Library Service for the Blind and Physically Handicapped (NLS) | Library of Congress BARD is a free library service of downloadable braille and audio reading material for residents of the United States and U.S. citizens living abroad who are unable to read or use standard printed material because of visual or physical disabilities. BARD provides access to thousands of special-format books, magazines, and music scores. The site is password-protected. Three steps to begin using BARD 1) Become an NLS patron 2) Register for BARD 3) Get a Device You can get a free talking-book player on long-term loan from your network library, buy a commercial model on your own if there are features you prefer, or download the free app to your smart device. Four steps to getting books on BARD Mobile 1) Sign In Sign In to BARD on your mobile device. For help with BARD, access videos on How to Use BARD Mobile or send an email to NLSDownload@loc.gov 2) Find Books You can search through recently added audio books, audio magazines, braille books and braille magazines. 3) Add to Wish List 4) Download

LibriVox | free public domain audiobooks App: Learning Ally Lost, Stolen or Censored? - Intellectual Freedom Blog By: Kristin Pekoll, Office for Intellectual Freedom If a person sets fire to library materials, we know that is censorship. We’ve seen the pictures from Germany of the thousands of books burned by Nazis. At the core, burning books denies access to information and ideas that is constitutionally protected by our First Amendment. ALA’s Office for Intellectual Freedom tracks censorship. Facebook post expressing outrage and disgustPrincipal directive to ban a book from the library collectionDistrict disinvites an author from visiting the schoolSuperintendent removes book from school curriculumLocal politician demands to delete library tweetsDean requests relocation of controversial displayFaculty relocates controversial material to a university vaultCataloger refuses to process new books Individual requests to remove library resources or cancel services is just one example of the reports we receive. Is this censorship? What about when labels are strategically placed over images? You tell me.

Software Add-On: Ghotit for MS Word Ghotit Real Writer & Reader for Macintosh Ghotit offers the most powerful English spelling and grammar checker for people with dyslexia, dysgraphia and other writing difficulties. Ghotit Real Writer & Reader is a Macintosh application that integrates with familiar Macintosh applications (i.e. Word, Pages, Safari, Powerpoint, Excel …). Intelligent Contextual Spell Checker Ghotit offers a unique context spell checker. The context of a sentence can be leveraged to assist in the following: Severe Spelling Error Correction In the world of spell checking, the degree of how badly a word is misspelled is measured by the editing distance of the misspelled word to the intended word. Ghotit is the best thing anybody did for us people who have Dyslexia. - Kai Fromme, Dyslexic, New Zealand Misused, Confused Word Correction Ordinary spell checkers either do not or provide very limited identification of misused words. Grammar Checker Ghotit performs grammar and punctuation corrections. Integrated Dictionary

Culture - The controversy behind Disney’s groundbreaking new princess Moana is a groundbreaking film for Disney, because it features the studio’s first Polynesian princess – but that’s not all. The film’s title character is also the first princess to possess an ‘average’ body, who unlike her counterparts, does not have a tiny waist and unusually long limbs. The film has just opened in cinemas and has been winning some positive early reviews, with Slant magazine praising Disney’s latest princess for being “neither selfishly rebellious nor simplistically innocent”. Rebecca Hains, author of The Princess Problem: Guiding Our Girls through the Princess-Obsessed Years, definitely views Moana’s physical appearance as progress. But conservative writer and talk show host Debbie Schlussel sees a thicker framed Moana as one more example of political correctness gone too far. Princess problems The film’s male mythological figure, Maui, a demigod of South Pacific legend, has also been criticised for being too big and bulky, and giving a distorted view of Polynesians.

State Programs Deadline: If needed, revisions to the Five-Year Plan are due April 2 each year. Grant Amount: Individual State Library allotments based on population Grant Period: Allotments may be expended over a 24-month period Program Contact: Laurie C. Brooks, Associate Deputy Director Phone: 202-653-4650 E-mail: stateprograms@imls.gov Read more about the Grants to State Library Administrative Agencies Program on the IMLS Web site Program Overview For more than 50 years, the LSTA Grants to States Program and its predecessors have supported the delivery of library services in the United States. The Grants to States Program is the largest grant program run by IMLS; it provides funds to State Library Administrative Agencies (SLAAs) using a population-based formula. SLAAs located in each of the 50 states, the District of Columbia, the Commonwealth of Puerto Rico, Guam, American Samoa, the U.S. The overall purposes of the Library Services and Technology Act are to Eligibility

Memberships Intellectual Freedom and Youth: Practical and Philosophical Considerations When it comes to intellectual freedom, most people would agree that adults should have the right to read what pleases them. Many would also agree that teenagers need some freedom to explore their own reading tastes and choices. But what about children, specifically school-aged children? Does it make sense to talk about intellectual freedom for a population that generally exercises little freedom at home or at school? The Library Bill of Rights does not discriminate on the basis of age, which would include younger children as well as older ones. But are there other reasons to support intellectual freedom for younger readers? First things first: What is intellectual freedom? Second, let’s look at elementary school aged children. Besides being developmentally appropriate, intellectual freedom for kids has some practical benefits for librarians. Even more importantly, free choice in reading is good for reading motivation! Reading is also a key component of identity formation. Loretta M.