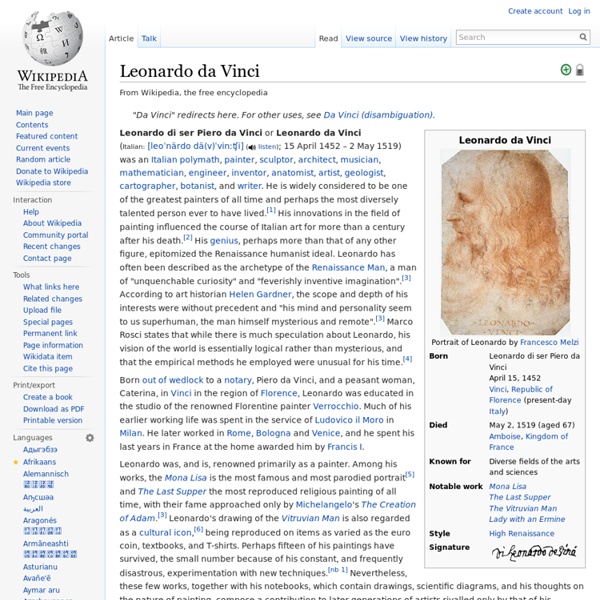 Leonardo is revered for his technological ingenuity. He conceptualised flying machines, an armoured vehicle, concentrated solar power, an adding machine,[7] and the double hull, also outlining a rudimentary theory of plate tectonics. Relatively few of his designs were constructed or were even feasible during his lifetime,[nb 2] but some of his smaller inventions, such as an automated bobbin winder and a machine for testing the tensile strength of wire, entered the world of manufacturing unheralded.[nb 3] He made substantial discoveries in anatomy, civil engineering, optics, and hydrodynamics, but he did not publish his findings and they had no direct influence on later science.[8] Life Childhood, 1452–1466 Leonardo's earliest known drawing, the Arno Valley (1473), Uffizi Verrocchio's workshop, 1466–1476 Professional life, 1476–1513 In 1482 Leonardo, who according to Vasari was a most talented musician,[25] created a silver lyre in the shape of a horse's head. Old age, 1513–1519 Personal life

Thomas Edison Edison as a boy Thomas Alva Edison (February 11, 1847 – October 18, 1931) was an American inventor and businessman. He developed many devices that greatly influenced life around the world, including the phonograph, the motion picture camera, and a long-lasting, practical electric light bulb. James Clerk Maxwell James Clerk Maxwell FRS FRSE (13 June 1831 – 5 November 1879) was a Scottish[2][3] mathematical physicist.[4] His most notable achievement was to formulate the classical theory of electromagnetic radiation, bringing together for the first time electricity, magnetism, and light as manifestations of the same phenomenon. Maxwell's equations for electromagnetism have been called the "second great unification in physics"[5] after the first one realised by Isaac Newton. With the publication of A Dynamical Theory of the Electromagnetic Field in 1865, Maxwell demonstrated that electric and magnetic fields travel through space as waves moving at the speed of light. Maxwell proposed that light is an undulation in the same medium that is the cause of electric and magnetic phenomena.[6] The unification of light and electrical phenomena led to the prediction of the existence of radio waves. Life[edit] Early life, 1831–39[edit]

Biomechanics Page of one of the first works of Biomechanics (De Motu Animalium of Giovanni Alfonso Borelli) Word history[edit] The word "biomechanics" (1899) and the related "biomechanical" (1856) were coined by Nikolai Bernstein[citation needed] from the Ancient Greek βίος bios "life" and μηχανική, mēchanikē "mechanics", to refer to the study of the mechanical principles of living organisms, particularly their movement and structure.[3] Method[edit] Competition: five copies of The Genius of Design to be won We've got together with publishers Quadrille to offer our readers the chance to win one of five copies of The Genius of Design by Penny Sparke, the official companion to a BBC television series due for transmission in May. The colour-illustrated book covers the history of design and its influences through the decades, the evolution of design archetypes and iconic designs and designers. This competition is now closed.

Albert Einstein Albert Einstein (/ˈælbərt ˈaɪnʃtaɪn/; German: [ˈalbɐrt ˈaɪnʃtaɪn]; 14 March 1879 – 18 April 1955) was a German-born theoretical physicist. Einstein's work is also known for its influence on the philosophy of science.[4][5] He developed the general theory of relativity, one of the two pillars of modern physics (alongside quantum mechanics).[3][6]:274 Einstein is best known in popular culture for his mass–energy equivalence formula E = mc2 (which has been dubbed "the world's most famous equation").[7] He received the 1921 Nobel Prize in Physics for his "services to theoretical physics", in particular his discovery of the law of the photoelectric effect, a pivotal step in the evolution of quantum theory.[8] Near the beginning of his career, Einstein thought that Newtonian mechanics was no longer enough to reconcile the laws of classical mechanics with the laws of the electromagnetic field. This led to the development of his special theory of relativity. Life

Isaac Newton Sir Isaac Newton PRS MP (/ˈnjuːtən/;[8] 25 December 1642 – 20 March 1726/7[1]) was an English physicist and mathematician (described in his own day as a "natural philosopher") who is widely recognised as one of the most influential scientists of all time and as a key figure in the scientific revolution. His book Philosophiæ Naturalis Principia Mathematica ("Mathematical Principles of Natural Philosophy"), first published in 1687, laid the foundations for classical mechanics. Newton made seminal contributions to optics, and he shares credit with Gottfried Leibniz for the development of calculus. Newton built the first practical reflecting telescope and developed a theory of colour based on the observation that a prism decomposes white light into the many colours of the visible spectrum. He formulated an empirical law of cooling, studied the speed of sound, and introduced the notion of a Newtonian fluid. Life

Ninja A ninja (忍者?) or shinobi (忍び?) was a covert agent or mercenary in feudal Japan. The functions of the ninja included espionage, sabotage, infiltration, and assassination, and open combat in certain situations.[1] Their covert methods of waging war contrasted the ninja with the samurai, who observed strict rules about honor and combat.[2] The shinobi proper, a specially trained group of spies and mercenaries, appeared in the Sengoku or "warring states" period, in the 15th century,[3] but antecedents may have existed in the 14th century,[4] and possibly even in the 12th century (Heian or early Kamakura era).[5][6] In the unrest of the Sengoku period (15th–17th centuries), mercenaries and spies for hire became active in the Iga Province and the adjacent area around the village of Kōga, and it is from their ninja clans that much of our knowledge of the ninja is drawn. Etymology

Benjamin Franklin Benjamin Franklin FRS (January 17, 1706 [O.S. January 6, 1705][1] – April 17, 1790) was one of the Founding Fathers of the United States. A renowned polymath, Franklin was a leading author, printer, political theorist, politician, postmaster, scientist, inventor, civic activist, statesman, and diplomat. As a scientist, he was a major figure in the American Enlightenment and the history of physics for his discoveries and theories regarding electricity.

Alhazen In medieval Europe, he was honored as Ptolemaeus Secundus ("Ptolemy the Second")[10] or simply called "The Physicist".[11] He is also sometimes called al-Basri (Arabic: البصري) after Basra, his birthplace.[12] He spent most of his life close to the court of the Caliphate in Cairo and earned his living authoring various treatises and tutoring members of the nobilities.[13] Overview[edit] Biography[edit] Born c. 965 in Basra, which was then part of the Buyid emirate,[1] to an Arab family.[14][15] Legacy[edit] Front page of the Opticae Thesaurus, which included the first printed Latin translation of Alhazen's Book of Optics.

Samurai Samurai around the 1860s Samurai (侍?), usually referred to in Japanese as bushi (武士? 20 Most Influential Women Intellectuals Women intellectuals have been playing an increasingly important role in shaping thought and culture. Here is SuperScholar’s list of the 20 most influential living women intellectuals. Margaret Atwood (1939– ), an iconic Canadian feminist novelist, expresses both the “goddess” and “activist” modes of the mid-twentieth century movement, via a confrontational style that gained converts by avoiding both violence and eccentricity. Aung San Suu Kyi (1945– ), a Nobel Peace Prize laureate and scholar living under house arrest and many other restrictions imposed by her native Burma’s (Myanmar’s) military rulers, leads a popular political movement and party whose non-violence and civil disobedience offer hope for eventual democratic government.