OnePlus 5 launch soon: Device to have flagship features for half the price 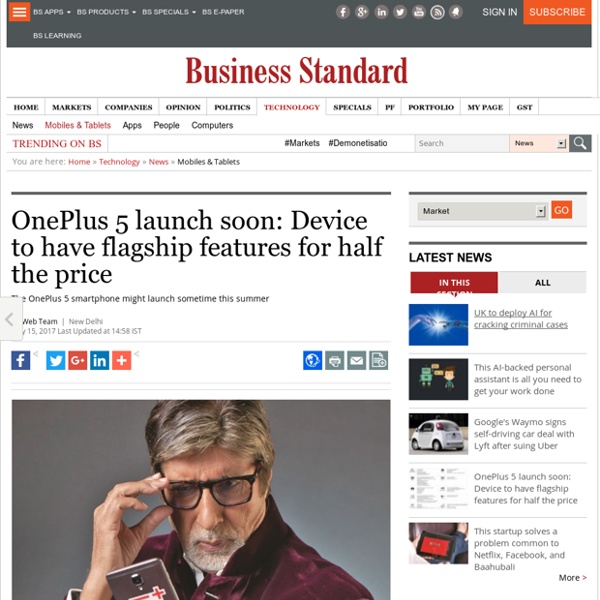 OnePlus 5, the next flagship device from the stable of China-based smartphone manufacturer OnePlus, is making a lot of buzz over the internet. The smartphone, expected to launch in a couple of months, is making the tech community keep an eagle eye on every small information available. While big names such as Samsung and LG have already announced their flagship smartphones, the keen wait for the OnePlus 5 is understood, given that OnePlus devices are known to throw in top-tier specifications at half the price of other flagship devices. Recently, OnePlus CEO Pete Lau posted a picture on Weibo confirming the development of OnePlus 5. OnePlus 5 specification sheet Courtesy: Slashleaks Business Standard compiles the latest details of the OnePlus 5 as available online: The name The next iteration of the flagship device from the stable of OnePlus would be named OnePlus 5. Display Camera Earlier leaks suggested that the OnePlus 5 would feature a dual-camera set-up at the rear. Processor Software Related:  snehalkhanna • roxannepaul89 • priya32438

NTPC masala bond available for trading on the London Stock Exchange India's state-run NTPC is among the first bonds to list on a new International Securities Market (ISM) on the London Stock Exchange (LSE). The NTPC masala bond is available for trading this week on ISM following the publication of its rulebook last week by the Minister of state for power, coal and renewable energy Piyush Goyal. "I am pleased that India's NTPC is one of the first companies to list their recent Masala Bond on London Stock Exchange's innovative new debt market. London has been a long-term partner for Indian firms looking to raise finance in the global capital markets and the development of an additional platform for the listing and trading of fixed income should be welcomed," Goyal said. The ISM is an additional market for the issuance and trading of UK and international primary debt targeted at institutional and professional investors. "As such issuers on ISM have access to one of the deepest pools of global capital.

Rajinikanth in politics? Subramanian Swamy scoffs at idea, calls it a joke Will he, won’t he? The possibility of Tamil Nadu's most popular star Rajinikanth taking the plunge into politics has been the subject of speculation for years now. The actor on Monday, left his fans even more puzzled by saying, "If it is God's will, I will enter politics." Rajinikanth also said if he enters politics, he will be truthful and will not entertain people who want to make money. While his comments were welcomed by his fans, Bharatiya Janata Party (BJP) leader Subramanian Swamy was not pleased. He called it a 'joke' and advised him to stay out of politics, reports News18. Swamy, who is known for his controversial remarks, said, "Rajini has been with various parties and has no ideology. He went on to say that Rajinikanth was not even a Tamilian; “in fact, he is a Marathi from Bengaluru,” he said. What did the Tamil superstar say to his fans: "God decides what we have to do in life. Two decades ago, Rajnikanth made a brief debut in politics, which he now calls "political accident".

HTC U11: A human touch-inspired smartphone that is perfectly 'squeezable' Taiwan-based consumer electronics company HTC on Tuesday announced its ‘U11’ flagship smartphone in Taipei. The HTC U11 smartphone features top-tier specifications and seems a flagship smartphone in true sense of the word that can compete with the likes of the Samsung Galaxy S8, LG G6 and Apple iPhone 7 smartphones. The HTC U11 can be operated using squeeze-based interactions, a first for any smartphone. In keeping with the human touch, which inspires the phone's squeeze-based interactions, the device has been named “U”11 -- implying a focus on you, rather than it. Here are the detailed features of HTC U11 smartphone: Few things are as natural and intuitive as the sense of touch. Reflects U - Liquid Surface HTC U11 features liquid glass surface, which is crafted using Optical Spectrum Hybrid Deposition – a process in which highly refractive minerals are used to create layers that together forms the phone’s back cover. Pictures that move U – Camera Powerful U - Processor, RAM and Storage

Cyber attack alert! Malware 'Wannacry' is spreading: Know all about it Nearly 100 countries, including India, have been hit by a massive cyber-attack, which, according to experts, was carried out with the help of "cyber weapons" stolen from the US' National Security Agency. The cyber attack was first reported from Sweden, Britain and France, US media outlets reported. Cyber extortionists tricked victims into opening malicious malware attachments to spam emails that appeared to contain invoices, job offers, security warnings and other legitimate files. It has been reported that a new ransomware, "Wannacry", is spreading widely. The ransomware WannaCrypt or WannaCry encrypts the computer's hard disk drive and then spreads laterally among computers on the same LAN. An increase in activity of the malware was noticed on Friday, security software company Avast reported, adding that it "quickly escalated into a massive spreading". Within hours, over 75,000 attacks have been detected worldwide, the company said. Virtual machine files (.vmx, .vmdk, .vdi). Icacls .

Hillary Clinton launches new political action group to fight Trump Former Democratic presidential candidate Hillary Clinton has launched a new political action organisation to fight against US President Donald Trump's agenda and raise funds for five prominent progressive groups. "I believe more fiercely than ever that citizen engagement at every level is central to a strong and vibrant democracy," Clinton said announcing the launch of her group 'Onward Together'. "More than ever, I believe citizen engagement is vital to our democracy. I'm so inspired by everyone stepping up to organise and lead," the former Secretary of State, said to her supporters as she urged them to contribute to the "remarkable" spirit of political activism. The announcement comes as Clinton, 69, works to find a new role in an evolving political landscape. The new group's website said it aimed to advance progressive values and reminded visitors that Clinton had won nearly 66 million votes in November's showdown with Trump.

Ransomware attack: Indian-origin Google researcher hints North Korea link As the world struggles to identify cybercriminals behind the global ransowmware attack that hit 150 countries, an Indian-origin security researcher working with Google has claimed that the hackers may have links to North Korea. According to Neel Mehta's discovery, the "Lazarus Group" that works on behalf of North Koreans may be behind the attack as the hacking group has, in the past, used the same coding and tools as were used in "WannaCrypt" — the software used in the current hacking into the Microsoft operating software, the BBC reported on Tuesday. "Neel Mehta's discovery is the most significant clue to date regarding the origins of WannaCrypt," the report quoted Moscow-based cyber security firm Kaspersky Lab as saying. "Lazarus Group", that according to Mehta is based in China, was responsible for a major hack on Sony Pictures in 2014 and another on a Bangladeshi bank in 2016. Specially, no US federal systems are affected, he said.

Meet the Indian teen who has developed world's smallest satellite for Nasa When the US’ National Aeronautics and Space Administration (Nasa) launches the world’s smallest satellite KalamSat on June 21, it will be the first time ever that it would be piloting an experiment by an Indian student. Developed by Rifath Sharook, an 18-year-old boy, from Tamil Nadu’s Pallapatti town, KalamSat weighs only 64 grammes. ‘KalamSat’, named after India's nuclear scientist and former President, APJ Abdul Kalam, will be launched from a Nasa facility in Wallops Island. Sharook’s project, the first to be manufactured via 3D printing, got selected through a competition, ‘Cubes in Space', sponsored jointly by NASA and 'I Doodle Learning'. The project aims to take the performance of new technology to space. Key features of the miniature satellite Sharook said it would be a sub-orbital flight and after launch the mission span would be 240 minutes. Speaking about his experience, Sharook added: “We designed it completely from scratch.

Billing for 800,000 affected as ransomware hits power company in Bengal The global ransomware attack has affected several computers of a state power distribution company in West Bengal but the central government computer system has largely escaped, officials said on Monday. State agencies that manage government websites and build supercomputers have installed security patches issued by Microsoft Corp. Federal Minister Ravi Shankar Prasad told reporters that there was no serious impact on India, with only isolated incidents in parts of Kerala and Andhra Pradesh states, and the government was monitoring the situation. However, West Bengal Power Minister Sovandev Chattopadhyay told Reuters that several billing centres of the state's Electricity Distribution Company Ltd (WBSEDCL) had been infected by the ransomware worm. "The full extent and magnitude of the problem will be realised by tomorrow," he said, the situation will be very serious if household electricity consumption data from the central server of the utility could not be retrieved beforehand.

Soon, Google's Android may power your car, just like it runs on smartphone Google on Monday announced it was now planning to install Android operating system straight into cars. The search engine giant, trying to establish itself in the automobile industry with high-technology, now could get a major fillip from the use of its mobile operating system in high-end cars. Cars like Audi Q8 and Volvo V90 SUVs will have a version of the Android operating system built in along with voice control operators to control functions like cabin temperature and an opening of the sunroof, even if the user doesn't have an Android phone. The OS will not only host popular applications like Google Maps, Spotify and NPR but also control car features like seat positioning and temperature. "The world is pretty different today We expect to be connected, no matter where we are. With its CarPlay, another infotainment system, rival Apple Inc has also been applying its iPhone software expertise to cars.

Maruti launches new Dzire, starting price Rs 5.45 lakh Maruti Suzuki today launched the new Dzire sedan, a lighter and more fuel efficient vehicle at Rs 5.45 lakh onwards (ex showroom, Delhi). The petrol variant begins at Rs 5.45 lakh and goes up to Rs 8.41 lakh. Diesel variant begins at Rs 6.45 lakh and goes up to Rs 9.41 lakh. First launched in 2008, Dzire happens to be Maruti’s second most sold car (after the Alto) and brings 14 per cent of the company’s domestic sales. “We have designed a fresh new car that is an authentic sedan. The many fine touches on the inside make it plush and premium, distinguishing it from everything else,” said Kenichi Ayukawa, managing director at Maruti Suzuki. With this launch, the country’s top car maker desires to position Dzire as a vehicle distinct from Swift which happened to provide cues for the initial model when it was launched in 2008. In a segment marked by the presence of more than a dozen players, Dzire commands 50 per cent of the volumes.