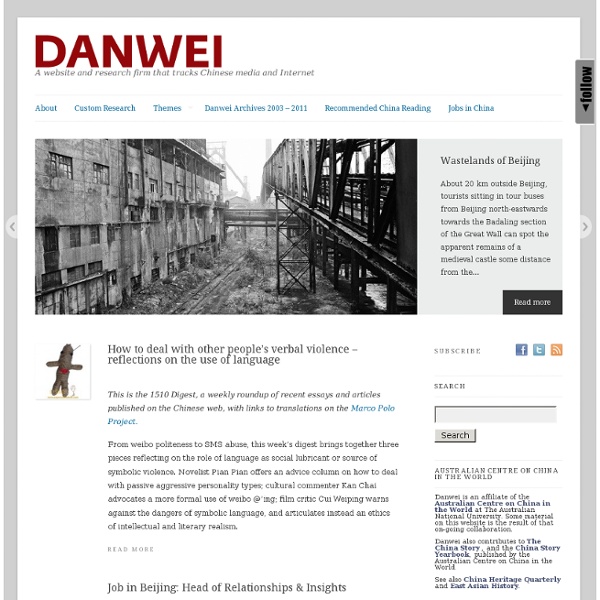 The table below shows mainland China’s most important websites, newspapers, and broadcast news organizations, together with numbers for website traffic, circulation and audience. The numbers are guesstimates based on media reports, listed companies’ public filings, media advertising rate cards, Alexa.com and Danwei interviews with media insiders. Like all numbers in China, they should be taken with a pinch of salt, for reference only. This list is updated every three months. The major changes since the last version of this report (published in November 2013) are continued growth of Internet users, and the rise of the mobile device as the most common means of accessing the Internet: “The number of Internet users in China had hit 604 million as of the end of September [2013], with mobile phones becoming the favored means of accessing the web, the State Internet Information Office announced”according to the China Daily.

a chat with blueprint, a digital creative collective “From a deep pool of blue ink rises an image…” – this is written on Blueprint‘s Neocha.com homepage, a digital collective that describes itself as a Chinese creative group with no artistic bounds. In an “Internet world” filled with many options for exploring different kinds of creative content, we find ourselves frequently entering Blueprint’s creative world. Their distinctive style comes from the ambient / “lowercase” electronic sound they produce as well as their visual works, which exude a subtle mysticism. The depth and breadth of content under the “Blueprint” name actually comes from members who live in many cities, including Zhengzhou, Beijing, Shanghai, Hangzhou, Chongqing, Guangzhou, Nanjing, among others. It’s important to note here that the new generation of Chinese creatives can’t be neatly divided into the usual first tier city, second tier city, etc. classifications. We’ve also shared some of Blueprints music in the embeddable player below.

How to Change the World Amazon start selling the paperback edition of my latest book, APE: Author, Publisher, Entrepreneur. APE explains how to publish a book by breaking the process down into three stages: Author explains how to write a book. Publisher explains how to produce both ebooks and printed books.Entrepreneur explains how to market and sell your book with an emphasis on social media. You can order APE here: There are 204 Amazon reviews for it: 181 five stars, 21 four stars, and 2 three stars which averages to five stars!

Gamble your life away in ZT Online In China's hottest online game right now, players encounter a "system" that executes a seductive control. Though unseen, this "system" is omnipresent. It a virtual yet real monopolist. "Not a leaf moves in this kingdom if I don't know about it." Silicon Hutong In the HutongFocus...Focus...1558 hrs. While I was absorbing caffeine and beta carotene at a sunny Beverly Hills espresso spigot earlier this month, I came across a superb article in the Wall Street Journal explaining how the U.S. motion picture business is starting to make films that are aimed at an international market. The phenomenon has reached such a stage, in fact, that movies ONLY likely to appeal to a domestic U.S. audience are not getting the green light, and those films deemed promising but too US centric are being given script and casting makeovers to make themselves more appealing to international audience. Darn those Foreigners Paying to See Our Movies!

OurielOhayon Every or nearly every single new service coming out to consumer has some sort of social layer where you need to "follow" people or topics in order to get fresh content updated all the time. That's how the web works today. It's not just about a frame and static content but a content stream of news and information coming your way: Facebook, twitter, pinterest, Flipboard, Pulse,…obviously but also all the new generation of games with social integration. Show me who you follow and i will tell you who you are. There is a major problem though: all the follow mechanisms in place are just dumb pipes with little intelligence. Why Your Negative Outlook is Killing Your Career CIO CIO — All of us cynical, sardonic, too-smart-for-our-own-and-everyone-else's-good IT professionals who think we can get ahead in our careers based purely on our blazing intellects will surely question the following stat: Only 25 percent of job success stems from intelligence and technical skills, according to research conducted in the field of emotional intelligence. "Intelligence does predict some success, but it doesn't predict even the majority of it," says corporate strategy consultant Shawn Achor, a former Harvard psychology professor and author of The Happiness Advantage: The Seven Principles of Positive Psychology that Fuel Success and Performance at Work (Crown Business 2010). "You can take individuals of equal levels of intelligence, and you find there's dramatic variance in their success rates." If career success isn't primarily a function of intelligence, then what causes it? Continue Reading

China IWOM Blog- Making Sense of the Buzz Mogujie.com launched a new online product, “ Free Group Purchase ”, at 5 p.m. on the 1st of March, encouraging users to initiate a group purchase on any product they want. This “C2B” group purchase would be achievedas long as they round up enough participants. So far, more than 15,000 group purchases have been started, 100 of which have been successful. news Last week, on the same day President Ma Ying-jeou accepted the resignation of a minister who made some drunken lewd remarks at a w?iyá (year-end office party), Ma was joking to the media about blow jobs. Classy . But it was all for a good cause , of course.

Reader Story: How I Learned About Frugality from De-Cluttering This guest post from Claire Brown is part of the “reader stories” feature at Get Rich Slowly. Some stories contain general advice; others are examples of how a GRS reader achieved financial success — or failure. These stories feature folks from all levels of financial maturity and with all sorts of incomes. I’m writing to you today from sunny London about how I learned frugality by throwing things away. This may sound counter-intuitive; if being frugal is about economy and not wasting things, then throwing things away could be seen as a big admission of defeat. But in the same way that having a budget is about consciously spending your money, I think consciously taking stock of what you throw away and — vitally — how it found its way into your house in the first place is a great way to become more frugal in the future.

Respect at Work: Get More Today With These Tips Editor’s note: This is a guest post from Joe Weber. Most men aim to like their jobs, and all men want to be respected. But doing a great job and being respected at work aren’t always mutually inclusive. There’s a guy in every workplace that busts his butt every day but still gets walked all over by his co-workers or worse yet… management. Earning respect from your superiors and colleagues is just as much about diplomacy and navigating the politics of the workplace as it is about effort.

aramatheydidnt: Catharsis amid crisis for Japan's entertainment biz Amid the rush of charity events and albums, a sobering reality intrudes: Japan’s already pressed entertainment industry faces a long slog getting back to normal. SMAP can afford to donate millions, and musicians with day jobs are to be commended for quickly throwing together a slew of events, but most artists and entertainment professionals in Tokyo are poorly paid and can’t withstand a further drop in demand. The earthquake is creating a crisis for them as real as the better reported problems affecting Japan’s electronics and auto industries. “With dates postponed it has had a domino effect right across the board,” explains Johnnie Fingers of Smash, promoter of the Fuji Rock Festival, “It has effected PA, lighting and backline rental companies, venues, hotels, transport companies.” Smash’s office went unscathed, but a difficult decision was made to cancel many gigs.