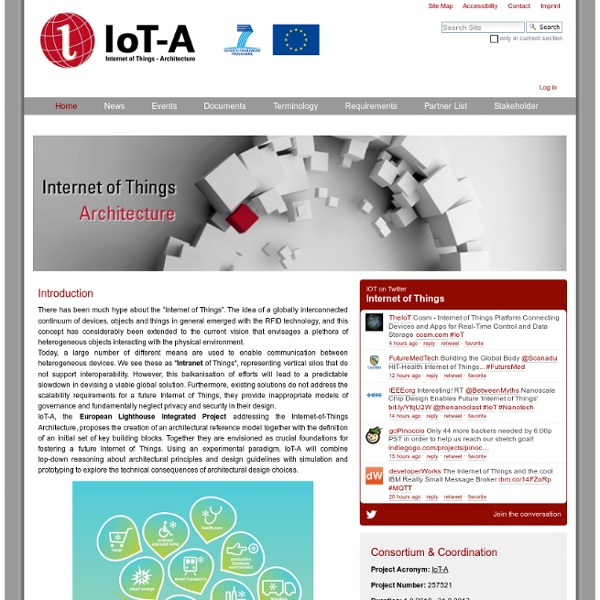 The Architectural Reference Model (ARM), presented in this book by the members of the IoT-A project team makes it possible to connect vertically closed systems, architectures and application areas so as to create open interoperable systems and integrated environments and platforms. It constitutes a foundation from which software companies can capitalize on the benefits of developing consumer-oriented platforms including hardware, software and services. The material is structured in two parts. Part A introduces the general concepts developed for and applied in the ARM. It is aimed at end users who want to use IoT technologies, managers interested in understanding the opportunities generated by these novel technologies, and system architects who are interested in an overview of the underlying basic models.

The Internet of Things In most organizations, information travels along familiar routes. Proprietary information is lodged in databases and analyzed in reports and then rises up the management chain. Information also originates externally—gathered from public sources, harvested from the Internet, or purchased from information suppliers. But the predictable pathways of information are changing: the physical world itself is becoming a type of information system. In what’s called the Internet of Things, sensors and actuators embedded in physical objects—from roadways to pacemakers—are linked through wired and wireless networks, often using the same Internet Protocol (IP) that connects the Internet. Pill-shaped microcameras already traverse the human digestive tract and send back thousands of images to pinpoint sources of illness. Podcast When virtual-world capabilities meet real-world businesses Yes, there are traces of futurism in some of this and early warnings for companies too. Exhibit Enlarge 1. 2. 3. 1. 2. 3.

What is Internet of Things (IoT The Internet of Things (IoT) is an environment in which objects, animals or people are provided with unique identifiers and the ability to transfer data over a network without requiring human-to-human or human-to-computer interaction. IoT has evolved from the convergence of wireless technologies, micro-electromechanical systems (MEMS) and the Internet. The concept may also be referred to as the Internet of Everything. In this Insider guide, InfoSec pros will learn about the risks related to the IoT and what they can do to mitigate them. A thing, in the Internet of Things, can be a person with a heart monitor implant, a farm animal with a biochip transponder, an automobile that has built-in sensors to alert the driver when tire pressure is low -- or any other natural or man-made object that can be assigned an IP address and provided with the ability to transfer data over a network. IPv6’s huge increase in address space is an important factor in the development of the Internet of Things.

How the "Internet of Things" May Change the World This week, the Oxford English Dictionary added the phrase "Internet of things" to its hallowed pages, along with such neologisms as Bitcoin (a virtual currency), selfie (a self-portrait photo), twerk (a new dance move), and fauxhawk (a mohawk hairstyle achieved with gel and a comb). But what exactly is the Internet of things, and how might the emerging technology change our lives? The Internet of things is a concept that aims to extend the benefits of the regular Internet—constant connectivity, remote control ability, data sharing, and so on—to goods in the physical world. Sometimes called the "Internet of everything," the term Internet of things was coined in 1999 by Kevin Ashton, a British technology pioneer who helped develop the concept. In order for objects to interface with the existing Internet, they must have some means to connect. Ashton co-founded the Auto-ID Center at the Massachusetts Institute of Technology in 1999, which developed a global standard for RFID. The U.S.

Look at the documentation page at SOTA document as an antry point (far from being complete but good to start on). by dregep Mar 5