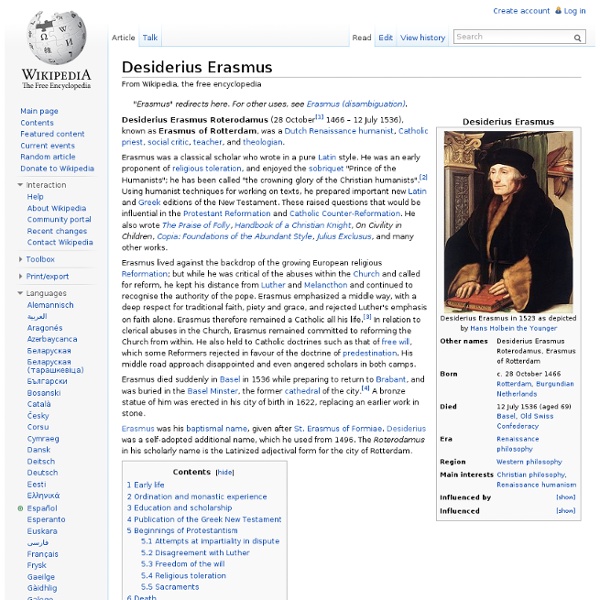 Desiderius Erasmus Roterodamus (27 October[1] 1466 – 12 July 1536), known as Erasmus of Rotterdam, or simply Erasmus, was a Dutch Renaissance humanist, Catholic priest, social critic, teacher, and theologian. Erasmus was a classical scholar who wrote in a pure Latin style. Amongst humanists, he enjoyed the sobriquet "Prince of the Humanists"; he has been called "the crowning glory of the Christian humanists".[2] Using humanist techniques for working on texts, he prepared important new Latin and Greek editions of the New Testament. These raised questions that would be influential in the Protestant Reformation and Catholic Counter-Reformation. He also wrote On Free Will,[3] The Praise of Folly, Handbook of a Christian Knight, On Civility in Children, Copia: Foundations of the Abundant Style, Julius Exclusus, and many other works. Erasmus was his baptismal name, given after St. Early life[edit] Ordination and monastic experience[edit] Education and scholarship[edit] Related:  Wikipedia A

Galileo Galilei Galileo Galilei (Italian pronunciation: [ɡaliˈlɛːo ɡaliˈlɛi]; 15 February 1564[3] – 8 January 1642), often known mononymously as Galileo, was an Italian physicist, mathematician, engineer, astronomer, and philosopher who played a major role in the scientific revolution during the Renaissance. His achievements include improvements to the telescope and consequent astronomical observations and support for Copernicanism. Galileo has been called the "father of modern observational astronomy",[4] the "father of modern physics",[5][6] the "father of science",[6][7] and "the father of modern science".[8] Early life Galileo was born in Pisa (then part of the Duchy of Florence), Italy, in 1564,[15] the first of six children of Vincenzo Galilei, a famous lutenist, composer, and music theorist, and Giulia Ammannati. Although a genuinely pious Roman Catholic,[17] Galileo fathered three children out of wedlock with Marina Gamba. Career as a scientist Galileo, Kepler and theories of tides

Pemulwuy Pemulwuy (aka Pimbloy, Pemulvoy, Pemulwoy, Pemulwye,) (c1750 - 2 June 1802) was an Aboriginal Australian man born around 1750 in the area of Botany Bay in New South Wales. He is noted for his resistance to the European settlement of Australia which began with the arrival of the First Fleet in 1788.[1] He is believed to have been a member of the Bidjigal (Bediagal) clan of the Eora people. Early life[edit] Pemulwuy was a member of the Bidjigal[2] people, who were the original inhabitants of Prospect Creek, a tributory of the upper George's River. He was related to the Toonga-gal (Toongabbie) and Burramatta-gal (Parramatta) clans of the Woodland Dharug people (J.L.Kohen, The Darug and their Neighbours, Darug Link, 1993) with whom much of his later Resistance was undertaken. The George's River is the source of [[Botany Bay], with whom the British colonists associated him.[3] Pemulwuy was born with a turned eye. Pemulwuy's War[edit] Origin of Conflict: Spearing of McIntyre[edit] Escape[edit]

Francis Bacon Francis Bacon, 1st Viscount St. Alban,[a] QC (/ˈbeɪkən/; 22 January 1561 – 9 April 1626), was an English philosopher, statesman, scientist, jurist, orator, essayist, and author. He served both as Attorney General and Lord Chancellor of England. After his death, he remained extremely influential through his works, especially as philosophical advocate and practitioner of the scientific method during the scientific revolution. Bacon has been called the father of empiricism.[4] His works established and popularised inductive methodologies for scientific inquiry, often called the Baconian method, or simply the scientific method. Bacon was knighted in 1603, and created Baron Verulam in 1618 and Viscount St. Biography[edit] Early life[edit] The 18-year-old Francis Bacon. His studies brought him to the belief that the methods and results of science as then practised were erroneous. The Italianate York Water Gate – the entry to York House, built about 1626, the year of Bacon's death

Office of Strategic Services The Office of Strategic Services (OSS) was a United States intelligence agency formed during World War II. It was the wartime intelligence agency, and it was a predecessor of the Central Intelligence Agency (CIA). The OSS was formed in order to coordinate espionage activities behind enemy lines for the branches of the United States Armed Forces. Origins and activities[edit] Prior to the formation of the OSS, American intelligence had been conducted on an ad-hoc basis by the various departments of the executive branch, including the State, Treasury, Navy, and War Departments. It had no overall direction, coordination, or control. President Franklin D. The Office of Strategic Services was established by a Presidential military order issued by President Roosevelt on June 13, 1942, to collect and analyze strategic information required by the Joint Chiefs of Staff and to conduct special operations not assigned to other agencies. In 1942, a young physician named Christian J. Facilities[edit]

Huldrych Zwingli Huldrych (or Ulrich/Ulricht[a]) Zwingli[b] (1 January 1484 – 11 October 1531) was a leader of the Reformation in Switzerland. Born during a time of emerging Swiss patriotism and increasing criticism of the Swiss mercenary system, he attended the University of Vienna and the University of Basel, a scholarly centre of humanism. He continued his studies while he served as a pastor in Glarus and later in Einsiedeln, where he was influenced by the writings of Erasmus. The Reformation spread to other parts of the Swiss Confederation, but several cantons resisted, preferring to remain Catholic. Zwingli formed an alliance of Reformed cantons which divided the Confederation along religious lines. In 1529, a war between the two sides was averted at the last moment. Historical context[edit] Map of the Swiss Confederation in 1515 The Swiss Confederation in Huldrych Zwingli's time consisted of thirteen states (cantons) as well as affiliated states and common lordships. Life[edit]

René Descartes Descartes laid the foundation for 17th-century continental rationalism, later advocated by Baruch Spinoza and Gottfried Leibniz, and opposed by the empiricist school of thought consisting of Hobbes, Locke, Berkeley, and Hume. Leibniz, Spinoza and Descartes were all well versed in mathematics as well as philosophy, and Descartes and Leibniz contributed greatly to science as well. His best known philosophical statement is "Cogito ergo sum" (French: Je pense, donc je suis; I think, therefore I am), found in part IV of Discourse on the Method (1637 – written in French but with inclusion of "Cogito ergo sum") and §7 of part I of Principles of Philosophy (1644 – written in Latin). Early life[edit] Descartes was born in La Haye en Touraine (now Descartes), Indre-et-Loire, France. In his book, Discourse On The Method, he says "I entirely abandoned the study of letters. Visions[edit] According to Adrien Baillet, on the night of 10–11 November 1619 (St. Work[edit] Death[edit] In 1991 E.

International Monetary Fund The International Monetary Fund (IMF) is an international organization headquartered in Washington, D.C., of "188 countries working to foster global monetary cooperation, secure financial stability, facilitate international trade, promote high employment and sustainable economic growth, and reduce poverty around the world."[1] Formed in 1944 at the Bretton Woods Conference, it came into formal existence in 1945 with 29 member countries and the goal of reconstructing the international payment system. Countries contribute funds to a pool through a quota system from which countries experiencing balance of payments difficulties can borrow money. As of 2010[update], the fund had XDR476.8 billion, about US$755.7 billion at then-current exchange rates.[4] Functions[edit] The IMF's role was fundamentally altered by the floating exchange rates post-1971. Surveillance of the global economy[edit] IMF Data Dissemination Systems participants: IMF member using SDDS IMF member using GDDS Benefits[edit]

Martin Luther Martin Luther OSA (German: [ˈmaɐ̯tiːn ˈlʊtɐ] ( ); 10 November 1483 – 18 February 1546) was a German monk, Catholic priest, professor of theology and seminal figure of the 16th-century movement in Christianity known later as the Protestant Reformation.[1] He strongly disputed the claim that freedom from God's punishment for sin could be purchased with monetary values. He confronted indulgence salesman Johann Tetzel, a Dominican friar, with his Ninety-Five Theses in 1517. His refusal to retract all of his writings at the demand of Pope Leo X in 1520 and the Holy Roman Emperor Charles V at the Diet of Worms in 1521 resulted in his excommunication by the Pope and condemnation as an outlaw by the Emperor. Luther taught that salvation and subsequently eternity in heaven is not earned by good deeds but is received only as a free gift of God's grace through faith in Jesus Christ as redeemer from sin and subsequently eternity in Hell. Early life Birth and education Monastic and academic life

Thomas Hobbes Though on rational grounds a champion of absolutism for the sovereign, Hobbes also developed some of the fundamentals of European liberal thought: the right of the individual; the natural equality of all men; the artificial character of the political order (which led to the later distinction between civil society and the state); the view that all legitimate political power must be "representative" and based on the consent of the people; and a liberal interpretation of law which leaves people free to do whatever the law does not explicitly forbid.[3] He was one of the founders of modern political philosophy and political science.[4][5] His understanding of humans as being matter and motion, obeying the same physical laws as other matter and motion, remains influential; and his account of human nature as self-interested cooperation, and of political communities as being based upon a "social contract" remains one of the major topics of political philosophy. Early life and education[edit]