So You Think You Can Dance on FOX - Official Site 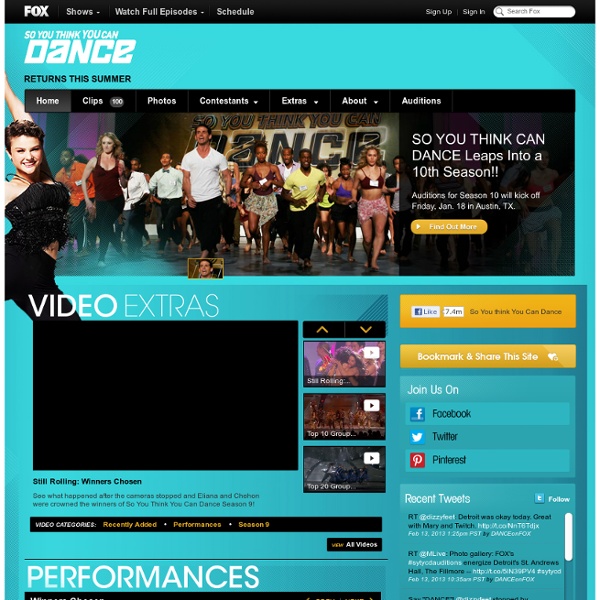 Returning for its landmark 10th season, SO YOU THINK YOU CAN DANCE debuts with a two-night premiere Tuesday, May 14 at 8/7c and Wednesday, May 15 at 9/8c on FOX. The Emmy Award-nominated hit dance competition series will feature host Cat Deeley (@catdeeley) and resident judges Nigel Lythgoe (@dizzyfeet) and Mary Murphy (@hottamaletrain), as well as guest judges, including Minnie Driver, Jesse Tyler Ferguson, Wayne Brady, All-Star Stephen “tWitch” Boss and Adam Shankman, among others, at auditions in Austin, Boston, Detroit, Memphis and Los Angeles. Each show will again feature breathtaking performances, as well as suspenseful eliminations, as the contestants compete to be named America's Favorite Dancers. In Season 10, producers travel across the country in search of dancers who represent the best America has to offer.

tatoos RAD Game Tools cooking West Michigan News from the Grand Haven Tribune a Michigan Newspaper fashion and style WIRED West Michigan fantasy pictures Bohnanza Two players in a game of Bohnanza. Bohnanza is a German-style card game of trading and politics, designed by Uwe Rosenberg and released in 1997 by Amigo Spiele in German and by Rio Grande Games in English. It is played with a deck of cards with comical illustrations of eleven different types of beans (of varying scarcities), which the players are trying to plant and sell in order to raise money.[1] The principal restriction is that players may only be farming two or three types of bean at once, but they obtain beans of all different types randomly from the deck, and so must engage in trading with the other players to be successful. The original game is for three to five players and takes about one hour to play, but the Rio Grande edition adds alternative rules to allow games for two or seven players. The name is a pun on the words "bonanza" and "Bohne" (German for "bean"). Rules[edit] Cards[edit] ^1 These beans were added in an expansion in the German edition. Setup[edit] Harvesting[edit]

music New Page 1 T he Original Sarasota Masters Swim Team has been in continual existence since 1973. Originally chartered as Suncoast Masters Swimming , we renamed our team Swim Florida Masters a few decades later to better reflect our growth as members from Ft. Myers and Naples joined our team. Interested knowing more about our history? After over 33 years we are now known as The Original Sarasota Masters Swim Team to better promote our proud heritage as one of the original Masters swim teams in the country. We welcome all levels of swimmers, from triathletes, beginner recreational and fitness, to the competitive, 18 years old and up! Membership is $55 per year, which includes the USMS, Team and FACT fees. Our Coach Coach Peter Hegwein is a 1984 graduate of The Florida State University with a degree in Biochemistry. Peter holds certifications from US Swimming as a N2 Starter and Deck Referee, and is an ASCA (American Swim Coaches Association) level 2 certified coach (Level 3 pending).