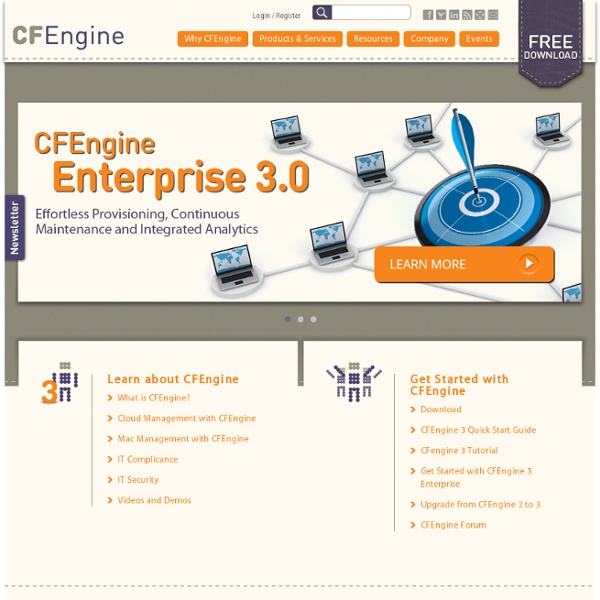 CFEngine History[edit] CFEngine 1[edit] The CFEngine project began in 1993 as a way for author Mark Burgess (then a post-doctoral fellow of the Royal Society at Oslo University, Norway) to get his work done by automating the management of a small group of workstations in the Department of Theoretical Physics. Like many post-docs and PhD students, Burgess ended up with the task of managing Unix workstations, scripting and fixing problems for users manually. Scripting took too much time, the flavours of Unix were significantly different, and scripts had to be maintained for multiple platforms, drowning in exception logic. After discussing the problems with a colleague, Burgess wrote the first version of CFEngine (the configuration engine) which was published as an internal report[1] and presented at the CERN computing conference. A year later, Burgess finished his post-doc but decided to stay in Oslo and took at job lecturing at Oslo University College. CFEngine 2[edit] CFEngine 3[edit] See also[edit]

Hudson Continuous Integration TclMon Unix Daemons in Perl | 4 Unix Daemons in Perl Summary In this tutorial, we learned how to create a robust daemon in Perl for most any *nix system. You might be surprised at how simple it is to craft one of these mystical beasts. Once you understand how it works, you can have some great fun on your system and escape the limits of cron at the same time. For more information, try the perlipc documentation included with the Perl distribution. i.e. perldoc perlipc. Next Time If you're an NT user, never fear.

Juju Puppet (software) Puppet is a tool designed to manage the configuration of Unix-like and Microsoft Windows systems declaratively. The user describes system resources and their state, either using Puppet's declarative language or a Ruby DSL (domain-specific language). This information is stored in files called "Puppet manifests". Puppet discovers the system information via a utility called Facter, and compiles the Puppet manifests into a system-specific catalog containing resources and resource dependency, which are applied against the target systems. Any actions taken by Puppet are then reported. Puppet consists of a custom declarative language to describe system configuration, which can be either applied directly on the system, or compiled into a catalog and distributed to the target system via client–server paradigm (using a REST API), and the agent uses system specific providers to enforce the resource specified in the manifests. It is model-driven, requiring limited programming knowledge to use.[4]

Bugzilla.org 10 Free Server & Network Monitoring Tools that Kick Ass By Ben Dowling When you have a website or a network, it’s helpful to be aware of any issues as soon as they occur. There are open source and freeware server/network monitoring tools that will supervise your infrastructure for any issues that may arise. These tools are meant to aid you in avoiding being taken offline and evaluating if your resource needs has outgrown your infrastructure. In this article, we review our top 10 server/network monitoring tools. 1. Monit not only monitors your server, but also attempts to remedy problems by taking predefined actions for certain situations. If you have more than one server that you need to monitor, then you can use M/Monit– an extended version of Monit that provides a simple way to monitor multiple machines. There’s also an iPhone app available for M/Monit to help you conveniently check on your network without lugging around a laptop around. 2. When you have a cluster of machines, it’s difficult to see how the whole cluster is doing all at once.

Comparison of open-source configuration management software This is a comparison of notable free and open source configuration management software, suitable for tasks typically performed by a system administrator. Basic properties[edit] "Verify mode" refers to having an ability to determine whether a node is conformant with a guarantee of not modifying it, and typically involves the exclusive use of an internal language supporting read-only mode for all potentially system-modifying operations. Platform support[edit] Note: This means platforms on which a recent version of the tool has actually been used successfully, not platforms where it should theoretically work since it's written in good portable C/C++ or an interpreted language. Short descriptions[edit] Not all tools have the same goal and the same feature set. Combines multi-node deployment, ad-hoc task execution, and configuration management in one package. Bcfg2 CFEngine Lightweight agent system. cdist ISconf Tool to execute commands and replicate files on all nodes. Quattor Radmind SmartFrog

Puppet Labs: IT Automation Software for System Administrators Introducing Metal as a Service: provisioning for the hyperscale era As we move from “tens” to “hundreds” to “thousands” of nodes in a typical data centre we need new tools and practices. This hyperscale story – of hyper-dense racks with wimpy nodes – is the big shift in the physical world which matches the equally big shift to cloud computing in the virtualised world. Ubuntu’s popularity in the cloud comes in part from being leaner, faster, more agile. And MAAS – Metal as a Service – is bringing that agility back to the physical world for hyperscale deployments. Servers used to aspire to being expensive. Powerful. Things are changing. Today, server capacity can be bought as a commodity, based on the total cost of compute: the cost per teraflop, factoring in space, time, electricity. In this hyperscale era, each individual node is cheap, wimpy and, by historical standards for critical computing, unreliable. We don’t even give hyperscale nodes proper names any more – ask “node-0025904ce794”. That’s where Metal as a Service (MAAS) comes in.