Being Multilingual: The natives and the speakers 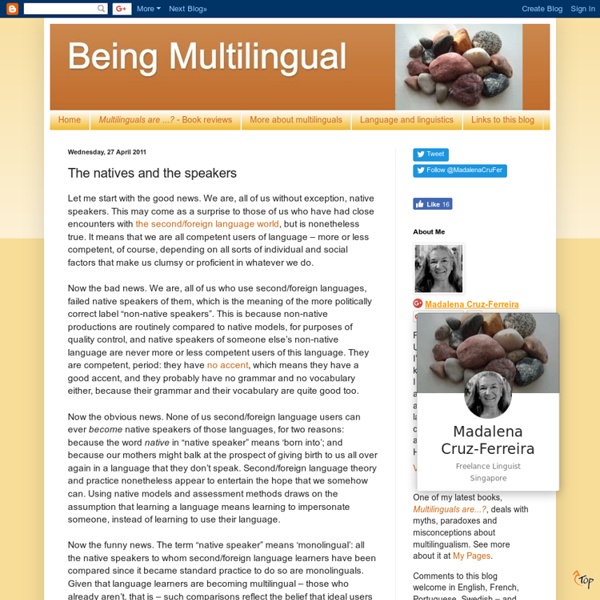 Let me start with the good news. We are, all of us without exception, native speakers. This may come as a surprise to those of us who have had close encounters with the second/foreign language world, but is nonetheless true. It means that we are all competent users of language – more or less competent, of course, depending on all sorts of individual and social factors that make us clumsy or proficient in whatever we do. Now the bad news. We are, all of us who use second/foreign languages, failed native speakers of them, which is the meaning of the more politically correct label “non-native speakers”. Now the obvious news. Now the funny news. And now, the extremely funny news. Near-native-like users of languages could well make ideal candidates to international espionage agencies – barring suspicion that the enemy might also have access to millisecond-detectors, of course. Thomas Paul Bonfiglio’s book, Mother tongues and nations.

I Said I Want the Red Bowl! Responding to Toddlers' Irrational Behavior Pin It Amelia, told that she can’t have a fifth book before bedtime, shouts: “You are the meanest mommy! You are not invited to my birthday party!” Derek, when offered a choice between carrots and cheese, not ice cream, before dinner announces: “I don’t like the choices you are choicing me!” How can parents and teachers best educate young children? What principles can both teachers and parents bring to the education of very young children? Gillian Craig, who was part of the Learning Time with Shaun and Timmy writing team, explains. As teachers and parents, we follow certain principles in our roles. Often though, these principles overlap and all we need to do is recognise and reinforce these areas. Ask (the right) questions When my daughter came out of her class one day shortly after her course started, I asked her, 'What did you do in class today?'.

Selective mutism Selective mutism is a severe anxiety disorder where a person is unable to speak in certain social situations, such as with classmates at school or to relatives they don't see very often. It usually starts during childhood and, left untreated, can persist into adulthood. A child or adult with selective mutism doesn't refuse or choose not to speak, they're literally unable to speak. The expectation to talk to certain people triggers a freeze response with feelings of panic, rather like a bad case of stage fright, and talking is impossible.

Deconstructing Role Play – Provide the Resources, Step Back and Watch Children’s Learning Flourish Hospital, vet’s surgery, post office, travel agent – themed role play areas are often seen as a must for an early years setting. They are often meticulously prepared to be aesthetically pleasing, covered in laminated words and pictures with the aim of enticing children in. But this is where I encountered a problem: in these areas, children are expected to come together to play out adult scenarios that are consistent with these themes. Yet how many children have visited a travel agent to book a holiday recently, or operated on a pet dog in a vet’s surgery? Practical tips By Opal Dunn, educational consultant and author Introduction Young children learn English differently from most adults. Most have an innate ability to pick up English while taking part in activities, by making sense of what they are doing and picking up the adult’s language that accompanies the activity. You can find out more in the British Council booklet ‘How young children learn English as another language’, also available on the parents pages of the LearnEnglish Kids website.

The Power (and Peril) of Praising Your Kids What do we make of a boy like Thomas? Thomas (his middle name) is a fifth-grader at the highly competitive P.S. 334, the Anderson School on West 84th. Slim as they get, Thomas recently had his long sandy-blond hair cut short to look like the new James Bond (he took a photo of Daniel Craig to the barber). Unlike Bond, he prefers a uniform of cargo pants and a T-shirt emblazoned with a photo of one of his heroes: Frank Zappa. Symbolic play and language development 1. Introduction 1.1.