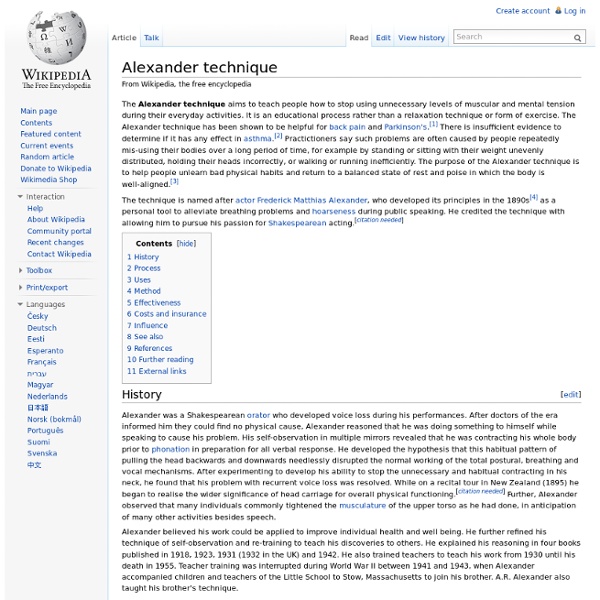 The Alexander technique, named after Frederick Matthias Alexander, teaches people how to stop using unnecessary levels of muscular and mental tension during their everyday activities. It is an educational process rather than a relaxation technique or form of exercise. The Alexander technique has been shown to be helpful for back pain and Parkinson's.[1] There is insufficient evidence to determine if it has any effect in asthma.[2] Practitioners say that such problems are often caused by repeated misuse of the body over a long period of time, for example, by standing or sitting with one's weight unevenly distributed, holding one's head incorrectly, or walking or running inefficiently. The purpose of the Alexander technique is to help people unlearn maladaptive physical habits and return to a balanced state of rest and poise in which the body is well-aligned.[3] History[edit] Alexander was a Shakespearean orator who developed voice loss during his performances. Process[edit] End-gaining

Feldenkrais wiki Feldenkrais illustrating the function of the human skeleton in sitting. The Feldenkrais Method, often referred to simply as "Feldenkrais", is a somatic educational system designed by Moshé Feldenkrais (1904–1984). Feldenkrais aims to reduce pain or limitations in movement, to improve physical function, and to promote general wellbeing by increasing students' awareness of themselves and by expanding students' movement repertoire. Approach[edit] Feldenkrais taught that increasing a person's kinesthetic and proprioceptive self-awareness of functional movement could lead to increased function, reduced pain, and greater ease and pleasure of movement. The Feldenkrais Method, like the Alexander Technique, is therefore a movement pedagogy as opposed to a manipulative therapy. Moshé Feldenkrais (pictured bottom) practising Judo, one of the major influences on his work. Feldenkrais is used to improve movement patterns rather than to treat specific injuries or illnesses. Scientific studies[edit]

Rubenfeld Synergy Method Unergi Body-Psychotherapy with Ute Arnold Gestalt wiki Gestalt therapy is an existential/experiential form of psychotherapy that emphasizes personal responsibility, and that focuses upon the individual's experience in the present moment, the therapist-client relationship, the environmental and social contexts of a person's life, and the self-regulating adjustments people make as a result of their overall situation. §Overview[edit] Edwin Nevis described Gestalt therapy as "a conceptual and methodological base from which helping professionals can craft their practice".[1] In the same volume Joel Latner stated that Gestalt therapy is built upon two central ideas: that the most helpful focus of psychotherapy is the experiential present moment, and that everyone is caught in webs of relationships; thus, it is only possible to know ourselves against the background of our relationship to the other.[2] The historical development of Gestalt therapy (described below) discloses the influences that generated these two ideas. §Experimental freedom[edit]