The Man in Seat Sixty-One - the train travel guide... 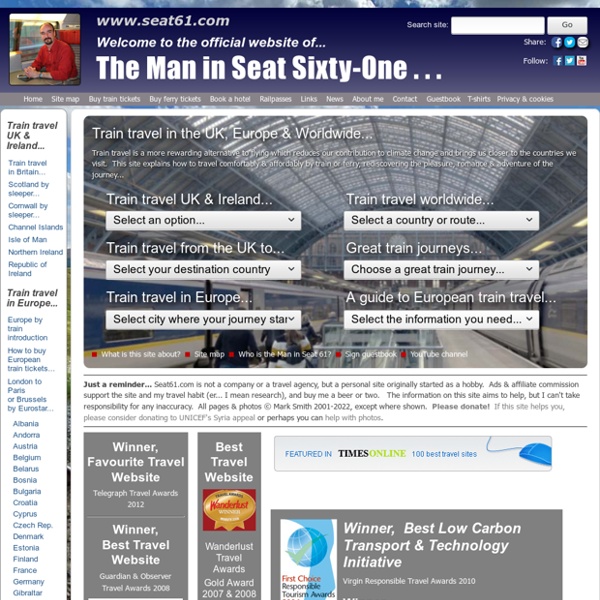 26 Killer Travel Gadgets Every Geek Needs Update: For even more kick ass gadgets, check out Another 26 Travel Gadgets Every Geek Needs. I admit it: I’m a tech-head. I love gadgets and I love to travel. Put the two together and I attain a state of bliss somewhere between watching a Meredith Baxter-Birney marathon on Lifetime and that feeling you get when you think about puppies and marshmallows together at the same time.

Europe’s best wilderness cabins and mountain huts for hikers Smugglers’ den, Finland Finland has a huge network of open wilderness huts across its 40 national parks, where hikers, skiers and canoers can spend one or two nights for free. Most are log cabins, some dating back to the 1900s; more unusual huts include a former lifeboat rescue station on Koivuluoto Island and an ex-military canteen on Ulko-Tammio Island, both in the Gulf of Finland national park; and a former fire guard’s home in Rokua national park. Facilities are generally basic, but a few have saunas.

Naples Underground – Naples, Italy Underneath the ancient city of Naples lies a vast geothermal zone composed of tuff, a volcanic rock. Over the last two-and-a-half millennia, extensive caves and tunnels have been carved out of the tuff, forming a shadow city obscured below the ground. The 280-mile (450-kilometer) subterranean network was formed by the Greeks in the fourth century BC to build what was then named Neapolis, or “New City.” The Romans later used the chambers and pathways to build aqueducts that provided water for many centuries of Neapolitans.

Most Interesting Libraries of the World The Royal library Black Diamond at the waterfront of Copenhagen owes its name to the black granite from Zimbabwe used for the facade of the building. The name was used by the public first and has been adapted officially later. Design by the Danish architects Schmidt, Hammer & Lassen. Photography by Mirage Bookmark Flickr.com The 10 best treks in the world These 10 classic treks are for serious walkers. All of them require a sturdy pair of lungs, fit legs and a good amount of preparation. However, if you choose to go on any of these trails then you will be rewarded with experiences that last a lifetime. In no particular order: 1. Living Root Bridges of Meghalaya: An Ingenious Engineering Solution On the planet, there exist many places with conditions so harsh no man-made structure can withstand unruly forces. Before the construction of any building, the environmental conditions in which it is built must be closely investigated. Today, skyscrapers extend far above the Sahara desert, cities exist on man-made islands, humans have found a way to conquer every continent on the planet. However, in some regions around the globe, there exist a few places with conditions so harsh that no modern engineering technique can be used to overcome the vast forces of mother nature. Although, despite the shortcomings of modern intervention, some communities are employing ancient techniques to construct bridges in the most improbable of locations- in the wettest regions on Earth like Meghalaya.

How to choose a travel backpack Choosing the right backpack for your trip is probably the single most important travel purchase that you will make before leaving home. Your backpack will be your companion, your house, and the most important piece of gear accompanying you around the world. There are many brands and styles out there, so apart from a few important considerations, the rest is up to your style of travel and preference. Female Solo Travel Tips - Women Travelling Solo Are you looking for female solo travel trips? Would you like to know what countries are best for women travelling solo to get their feet wet? We put those questions to our Facebook community as we love getting insider tips from other travellers. While most of my travel around the world has been done with Craig, my first adventures saw me setting off into the untamed wilderness on my own.

25 Wonderful Places To Visit In Your Lifetime If you like this story feel free to share... Grand Canyon: One of the beautiful places of the world, Grand Canyon is the steep-sided gorge carved by the Colorado River in Arizona State of United States. St. George's Church – Topola, Serbia St. George’s Church, also known as the Oplenac Mausoleum, is both a church and mausoleum for members of the Karađorđević dynasty. It was built by King Peter I of Serbia. The temple is a monumental building. Its interior is covered with more than 40 million pieces of colorful glass, creating a dazzling array of more than 15,000 shades of color.