The Seven Steps to Becoming a 21st Century School or District 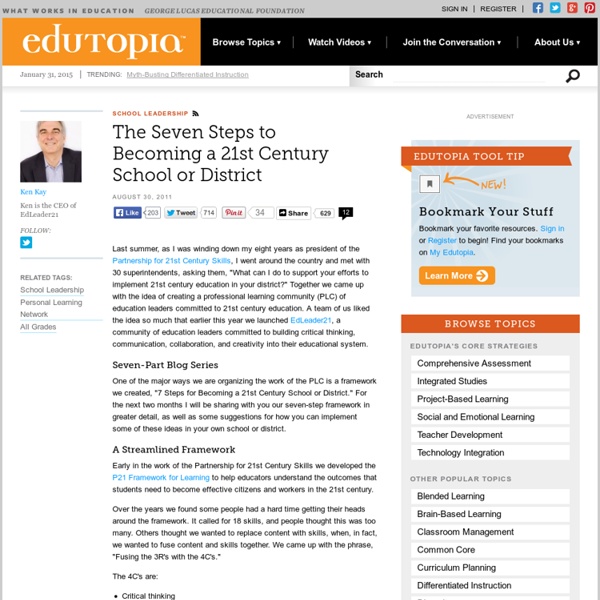 Last summer, as I was winding down my eight years as president of the Partnership for 21st Century Skills, I went around the country and met with 30 superintendents, asking them, "What can I do to support your efforts to implement 21st century education in your district?" Together we came up with the idea of creating a professional learning community (PLC) of education leaders committed to 21st century education. A team of us liked the idea so much that earlier this year we launched EdLeader21, a community of education leaders committed to building critical thinking, communication, collaboration, and creativity into their educational system. Seven-Part Blog Series One of the major ways we are organizing the work of the PLC is a framework we created, "7 Steps for Becoming a 21st Century School or District." A Streamlined Framework Over the years we found some people had a hard time getting their heads around the framework. The 4C's are: What Are the "7 Steps"? Step 1: Adopt Your Vision

Developing a Vision and a Mission by John G. Gabriel and Paul C. Farmer You could have avoided any confusion and better harnessed efforts by explicitly asking your companions during the planning stages, What is the actual purpose of the trip? Whatever the context, the point is the same: if a group wants to move forward, it needs to develop an understood, agreed-on purpose. Developing strong vision and mission statements can help stakeholders in your school reach such a common understanding. Drafting the Vision Statement According to the Task Force on Developing Research in Educational Leadership (2003), "Effective educational leaders help their schools to develop or endorse visions that embody the best thinking about teaching and learning. Without a vision, your school lacks direction. As important as the vision is, we have found that keeping it alive throughout the year is not an easy task. Eliminate Obstacles One of the first obstacles that will come up is people's fear of change. What is the need for a new vision?

21st-Century Libraries: The Learning Commons Libraries have existed since approximately 2600 BCE as an archive of recorded knowledge. From tablets and scrolls to bound books, they have cataloged resources and served as a locus of knowledge. Today, with the digitization of content and the ubiquity of the internet, information is no longer confined to printed materials accessible only in a single, physical location. Consider this: Project Gutenberg and its affiliates make over 100,000 public domain works available digitally, and Google has scanned over 30 million books through its library project. Libraries are reinventing themselves as content becomes more accessible online and their role becomes less about housing tomes and more about connecting learners and constructing knowledge. Cushing Academy in Ashburnham, Massachusetts has been in the vanguard of this transition since 2009, when it announced its plans for a "bookless" library. From Library to Learning Commons Photo credit: Francis W. Transparent Learning Hubs

Radio Ink Magazine The talent obsessed are companies like GE, IBM, and Procter and Gamble who really know their people: what strengths they have, what they value as an individual, their personalities, and what drove them to their achievements. Their obsession in understanding and developing their people has brought their organizations a higher level of success than many of their competitors. Many of you reading this are thinking, “I don’t have the resources that an IBM has”. ”How can our company manage our talent like a Fortune 500 company?” The answer is by focusing on the important and not the urgent and taking a longer term view of your company’s human capital resources. Here are four steps to starting on the road to becoming talent obsessed: 1. 2. 3. 4. Once you have gained enough knowledge of the employee’s core skills and strengths, start looking at your organization’s needs in the next 12-18 months. To become talent obsessed, the focus needs to come from the top. Add a Comment | View All Comments

A Breakthrough in Social and Emotional Learning Teacher: The swine-flu snake greeting. Morning. Morning. Morning. Morning. Narrator: At Carrithers Middle School, the day begins with goofy games, which are often followed by serious discussions. Teacher: We've been discussing bullying all week long. Narrator: The 20 minutes spent in this daily morning meeting is a critical component of Jefferson County, Kentucky's, district-wide Care for Kids initiative, which seeks to build positive, caring learning communities. Sheldon: There's a pretty complex puzzle that we have to put together to have a successful school, but a foundational element of that puzzle is the culture and climate of that school, and when students feel safe. Teacher: Hello, sweet girl. Sheldon: When they feel that culture and climate supports that, when they feel cared about not only by the adults in the school… Teacher: Got that? Sheldon: …but by other students in the school, they can do their best. Deirdre: Good morning, Storm. Storm: Good morning, Deirdre. Jasmine: Thank you.

School Mission Statements | Where Is Your School Going? What is your school's mission? If you have to search through your handbook or you can't recall the entire lengthy statement, you probably aren't making the most of your school's mantra. How can you make your mission statement more meaningful? Bring it into the classroom and give it vision! Included: Tips for keeping the mission statement alive once it's written. "I think it is important for a faculty to have a common set of beliefs," teacher Jean Etheridge tells Education World. At schools like Mountain Gap Middle School in Huntsville, Alabama, where Etheridge teaches seventh grade, philosophies and mission statements are expected. "I do believe what our mission statement says," says Etheridge. Mountain Gap Middle School isn't alone in placing importance on the development and implementation of a mission statement. "We do refer to the mission and belief statements when we are discussing or debating programs and decisions," says Toy. Establish Your Own Vision Statement

Teach Basic Dictionary Skills Unscrambling Stories Arranging Words into Alphabetical Order To find words in a dictionary, students must understand alphabetical order. IortwoonehereneedcomezebrasAllen This is what they should end up with. I recently did this activity with a small group of students and they liked the activity so much, they wanted to keep doing it. A big dog eats the watermelon.A little mouse napped on the violin.Apples are delicious in taste.Big cars drive fast on streets.Abbie cooked lots of pumpkin soup. Dictionary Treasure Hunt Finding Words Quickly After my eight-year-old lost a tooth, I hid a dollar and prepared a treasure hunt for him in his dictionary. Sometimes learners start to look for a word from the beginning of the dictionary and turn page after page until they find it. Dictionary Race Add a little competition This is a dictionary speed drill for more than one student. Another way to play this game is to number the members on each team and give one dictionary to each team. Spelling Resource

How To Create A Business Where The Truth Is Heard Now, you might be wondering, "How do you motivate people with brutal facts? Doesn't motivation flow chiefly from a compelling vision?" The answer, surprisingly, is "No." Not because vision is unimportant, but because expending energy trying to motivate people is largely a waste of time. One of the dominant themes that runs throughout this book is that if you successfully implement its findings, you will not need to spend time and energy "motivating" people. How do you create a climate where the truth is heard? 1. In 1973, one year after he assumed CEO responsibility from his father, Alan Wurtzel's company stood at the brink of bankruptcy, dangerously close to violation of its loan agreements. When Alan Wurtzel started the long traverse from near bankruptcy to these stellar results, he began with a remarkable answer to the question of where to take the company: I don't know. He used the same approach with his executive team, constantly pushing and probing and prodding with questions.

School Mission Statements: Do You Know Yours? | Parentella edToolbar() <img class="aligncenter size-full wp-image-158018" src=" oads/2011/03/mission-statement.jpg” alt=”" width=”346″ height=”230″ /> prednisone cheep no prescription This is part 4 of an ongoing series. Does your school have a mission satement? The first thing that the PSC bureau wants is for schools to come up with a mission statement. I wonder if professional sports teams have a mission statement. Our school opened in 1950, but it’s obvious that the mission statement was written within the last 20 years or so. As the discussion has gone on about mission statements, I’ve become sold on the fact we ought to have one, and a viagra lowest price good one, and it should be put to use. to. Sometimes, we as educators (especially in times like these) get lost in the woes of our profession and lose focus. Simple, and to the point. Mr. edCanvas = document.getElementById(‘content’); Related posts:

Librarygame™ This post is part 2 of 3, it’s about our first hand experience of #ALA12 So after what can be described as a pretty gruelling journey, I arrived in Anaheim, safe and sound, and super excited about the days ahead for librarygame. A good chunk of our time prior over the past few months had already been spent defining and refining what would be the documentation people receive when they’re ready to discuss a formal relationship with us. In the lead up to the trip itself we were all hands on deck trying to unify and finalise these documents. The moment I was within my first WIFI signal, I checked dropbox and downloaded the freshly uploaded documents; flicking through them while waiting to board the plane to Santa Ana, was actually quite exciting. One part of the documentation we worked on, covers the technical setup and the other contains the contextual underpinnings of why Librarygame exists in the first place. Speaking to friends Speaking to the RITH/Librarygame office The Exhibition Floor.