The 6 Most Frequently Quoted Brain Facts (That Are Total BS) 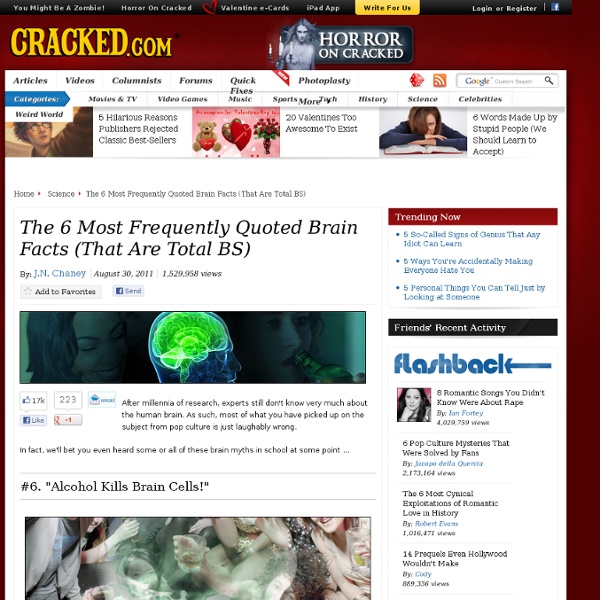 After millennia of research, experts still don't know very much about the human brain. As such, most of what you have picked up on the subject from pop culture is just laughably wrong. In fact, we'll bet you even heard some or all of these brain myths in school at some point ... #6. What you heard: It's the reason Homer Simpson gets stupider every season, and it's what your mom warned you about when you got caught sneaking a beer from dad's stash when you were 13: Every beer you drink kills something like a million brain cells and makes you permanently stupider. Getty"Goodbye, Algebra 2!" The truth: Let's get this out of the way now -- too much alcohol does a whole host of horrible shit to just about every organ in your body. Getty"Asleep" isn't the same as "brain damaged." The whole idea of alcohol destroying your brain actually dates back to the temperance movement in America, circa 1830. Plenty of people believed it -- it just seems like common sense that beer destroys the brain. #5. #4.

The 6 Most Mind-Blowing Things Ever Discovered in Space #3. A Cold Star Here's the very first lesson you learned about the cosmos: The sun is hot. When you get into the science of it, you realize that you were even more right than you thought: The surface of the sun is about 10,000 degrees Fahrenheit, and several thousand times hotter than that at the core. Photos.comThough you could pretend you were that Nazi guy from Raiders of the Lost Ark. But, scientists have recently discovered that's not always the case. Photos.comYou could be the first prostitute to work a star. How is This Even Possible? WISE 1828+2650 is part of a small group of cold stars known as brown dwarfs. Via Earthsky.orgNo, you're doing great, little guy. #2. Via Wikimedia Commons The hardest part of understanding anything about space is trying to grasp a sense of scale. Via VJkrishna.com"Y'all ain't shit." But now imagine a star that is as big compared to the sun as the sun is to the Earth. Via WikipediaFatass. That's the star VY Canis Majoris. How Is This Even Possible? #1.

Stumbling on Happiness: Daniel Gilbert | Blog I recently wound up in the emergency room. Don’t worry, it was probably nothing. But to treat my case of probably nothing, the doctor gave me a prescription for a week’s worth of antibiotics, along with the usual stern warning about the importance of completing the full course. I understood why I needed to complete the full course, of course. My doctor seemed smart. Certain numbers have magical properties. But these magic numbers don’t just dominate our thoughts and dictate our words; they also drive our most important decisions. Consider my prescription. Italy! If patients are typically told that every 24 hours (24 being the magic number that corresponds to the rotation of the earth) they should take three pills (three being the magic number that divides any time period into a beginning, middle and end) and that they should do this for seven days, they will end up taking 21 pills. Magic “time numbers” cost a lot, but magic “10 numbers” may cost even more. • Osborne, M. • Coulter, K.

Human Connectome Project |  About Mapping of the human connectome offers a unique opportunity to understand the complete details of neural connectivity (Sporns et al., 2005, Wedeen et al., 2008, Hagmann et al., 2007). The Human Connectome Project (HCP) is a project to construct a map of the complete structural and functional neural connections in vivo within and across individuals. The HCP represents the first large-scale attempt to collect and share data of a scope and detail sufficient to begin the process of addressing deeply fundamental questions about human connectional anatomy and variation. Human Connectome Project Pamphlet (web-resolution) UCLA-Harvard Consortium The Human Connectome Project is a five-year project sponsored by sixteen components of the National Institutes of Health, split between two consortia of research institutions. Methods The HCP is leveraging key scientific domains that together yield a steady release of increasingly detailed connectomics data and tools. Results Conclusions References V.

Top 10 Incredible Sound Illusions | Listverse Weird Stuff Following the popularity of our optical illusions lists (20 Amazing Optical Illusions, and Another 10 Amazing Optical Illusions), we have put together an amazing array of sound illusions (auditory illusions). In these illusions, your mind is tricked in to thinking it is hearing something when, in fact, it is not. This illusion was discovered by Diana Deutsch, and is an example of our brains “grouping” similar notes together. There are several ways in which people perceive these sounds, but the most common is to group the high and low notes together. NOTE: Listen through stereo headphones, or stereo separated loudspeakers, best placed some distance apart. Some pieces of music consist of high-speed arpeggios or other repeating patterns, which change only subtly. Compare these recordings of Christian Sinding’s Frühlingsrauschen (“Rustle of Spring”). Shepherds Ascending Tones This recording is subtle.

Calvin & Hobbes Quotes I like maxims that don't encourage behavior modification. Reality continues to ruin my life. Weekends don't count unless you spend them doing something completely pointless. A little rudeness and disrespect can elevate a meaningless interaction to a battle of wills and add drama to an otherwise dull day. It's psychosomatic. I understand my tests are popular reading in the teachers' lounge. Life's disappointments are harder to take when you don't know any swear words. Where do we keep all our chainsaws, Mom? That's the difference between me and the rest of the world! In my opinion, we don't devote nearly enough scientific research to finding a cure for jerks. You know, Hobbes, some days even my lucky rocketship underpants don't help. Its no use! What's the point of wearing your favorite rocketship underpants if nobody ever asks to see 'em? As a math atheist, I should be excused from this. This one's tricky. I'm learning real skills that I can apply throughout the rest of my life ... I'm not dumb.

5 Insane Scientific Charts You Won't Believe Actually Exist Everything needs to measured: Even things you don't want to touch, smell, look at, think about or even exist on the same physical plane as. Because sometimes, you just have to know what precise category of vomit you'd be covered in if you ate too much Subway, or got drunk and played on the merry-go-rounds (Scattershot Olive, is the answer). Therefore, in some office somewhere, a person is looking at a chart displaying... The Bristol Stool Scale What Does it Measure? It ain't bar chairs. Thanks for ruining another of life's little pleasures, Science. And now that you've seen that graphic, you can handily describe all of your poops--from rabbit to flash food--to your horrified, regretful conversational partners. There's a reason that water is brown. It's like they're actively trying to be gross. ...Savory? Dang. The Kinsey Scale measures exactly how gay or straight you are. In fact, "straight" is less than 15 percent of the story. We've got no clue where to put Devine. ...for science.