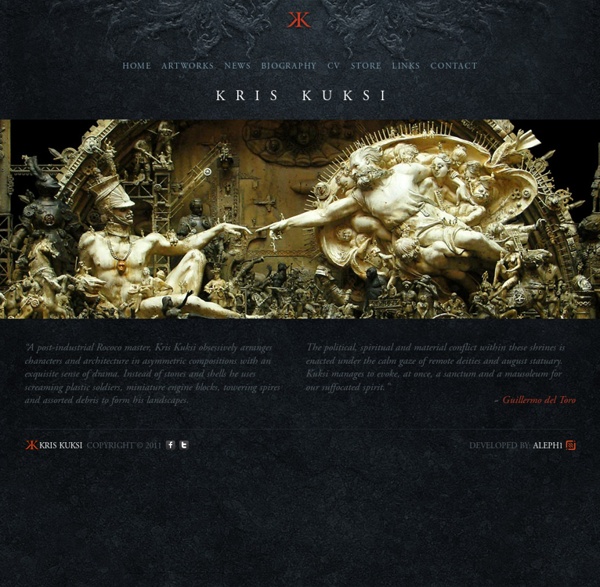 City Cyclops Come Touch Things What are you doing for the next four months? Hopefully you'll be spending every day at the Cartoon Art Museum, witnessing the new Small Press Spotlight featuring the work of Jon Adams. You can see artwork in real life, instead of on a computer screen. And if you break the glass, you can touch the artwork. Destruction and Hope The elaborate mixed-media sculptures of Kris Kuksi. His work reflects today’s world where “(…) mankind is oftentimes frivolous and fragile, being driven primarily by greed and materialism. He hopes that his art exposes the fallacies of Man, unveiling a new level of awareness to the viewer.” [1] Warning: This post may contain images with nudity. Viewer discretion is advised.

Ghosts in Bengali culture In Bengal, ghosts are believed to be the spirit after death of an unsatisfied human being or a soul of a person who dies in unnatural or abnormal circumstances (like murder, suicide or accident). Even it is believed that other animals and creatures can also be turned into ghost after their death. Usually after the death there are some Hindu rituals that are used to follow in Bengal which ends with a holy food offerings (called ‘Pindodaan’) to the spirit of the dead person. This final ritual is done at Pret Pahar (Mountain of Spirits) in Gaya, Bihar. It is believed that if this final ritual remains incomplete the spirit cannot leave this mortal world for heaven and haunts their relatives to complete it. Types of ghosts[edit]

Silenced Geisha and Monkey Brains Artist Mozart Guerra creates sculptures with foam or polystyrene and covers each one essentially with rope. Notes about Guerra (from bio): Born in Recife, Brazil, in 1962, Mozart studied architecture at University Federal of Pernambuco and obtained his degree in 1986. About The Lucifer Principle what is The Lucifer Principle: A Scientific Expedition Into The Forces of History Latest News Joe Paterno, the man who for decades was synonymous with Penn State football and was known by the college football world as just "JoePa", has died. Paterno, 85, had been receiving chemotherapy as part of his treatment for lung cancer, and complications from that treatment claimed the longtime Penn State coach's life on Saturday. Paterno was the head coach of Penn State for 46 seasons before being fired in November as his role in the Jerry Sandusky child sex abuse scandal came under greater scrutiny.

I’ll Beat You Up These are interesting sculpture-um-drawings by Claire Oswalt. She uses materials such as graphite, paper, and wood. The last photo in this post shows how they’re constructed. Artwork © Claire Oswalt Link via Beautiful Decay backchannel UFO Sighting Photographed Over Kentucky, USA October 24th, 2012 I haven’t seen one (fake or real) like this before. Gray Magic Gray magic is a term used to describe magic not performed entirely for beneficial, ethical or spiritual purposes, yet not malevolent either. It is seen as falling in a continuum between white and black magic. According to D. J. Rusty scrap metal transforms into animal and bug sculptures At first glance, you probably can’t figure out what these insect and animal sculptures are made of. Believe it or not, they’re constructed out of things you can probably find at your neighborhood flea market. A flea market is where artist Eduard Martinet goes every time he needs material for his sculptures.